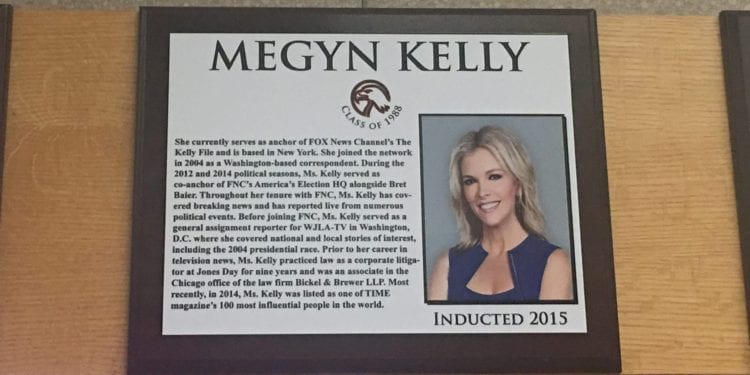 DELMAR — Megyn Kelly’s place with Bethlehem Central continues to be abrasive with residents who feel her views fail to embody what young adults should aspire to achieve.

The former Fox News anchor was inducted into the high school’s hall of fame five years ago. In 2015, her face graced television screens and magazine covers. Her journalistic mettle was demonstrated on the national scene, conducting tough interviews with political leaders and going toe-to-toe against a future president. Her opinions, however, drew the condemnation of national viewers and people from home.

Students for Peace and Survival called upon the school district two years ago to remove Kelly from its hall of fame. Those enshrined are represented with plaques hung around the high school’s front foyer. Names include authors, justices, a town supervisor, a current Major League Baseball coach and an Academy Award-winning actress – the best of alumni to represent the “Orange and Black.” But, when the news show host attempted to defend blackface to a national audience, residents balked.

“When Ms. Kelly issued an apology for her racist comment about ‘blackface’ she promised to bring ‘more understanding, love, sensitivity and honor’ into her commentary, journalism, something our Students for Peace and Survival honed in on in their letter,” Delmar resident Judy Abbott wrote to The Spotlight. “But she has done none of that.”

The school district fielded concerns two years ago, and after a special meeting of the Hall of Fame committee, decided to keep Kelly in place. Superintendent Jody Monroe said there was no “formal process” to remove anyone, but that the committee would work on that. Kelly’s place is questioned again after she shared disparaging words directed towards people of color who have died in the hands of law enforcement.

“Just spend a few minutes on Ms. Kelly’s Twitter page and you can see gaslighting and racism,” Abbott wrote.

Kelly first pursued a career practicing law before setting out as a journalist. After obtaining an undergraduate degree in political science at Syracuse University and later a law degree at Albany Law School, she became an associate at Bickel & Brewer LLP in Chicago. From there, she moved on to be a corporate litigator at Jones Day, where she was for nine years.

Her successful career as a journalist began after a move to Washington, D.C. She started as a general assignment reporter with a local ABC television affiliate. Her coverage of national news drew attention from CNN and Fox, the latter of which she joined in 2004. From there, she rose the ranks from contributing to legal segments to covering the 2004 presidential race.

She continued to be a rising star within the conservative news outlet, serving as a substitute anchor before hosting her own two-hour show in 2010. In 2014, Time Magazine named her among their 100 most influential people in the world. A year later, she garnered media attention for unexpectedly locking horns with then-Republican presidential candidate Donald Trump as she moderated the Republican Party presidential debate hosted by her network.

“One of the things people love about you is you speak your mind,” she said, “and you don’t use a politician’s filter. However, that is not without its downsides; in particular, when it comes to women. You’ve called women you don’t like fat pigs, dogs, slobs and disgusting animals. … Does that sound to you like the temperament of a man we should elect as president?”

Kelly surprised many as she grilled each of the candidates that night. Those expecting to see the apparent Republican-friendly news outlet lob easy questions were amazed as she placed the party’s leading candidate on the hot seat. The exchange was among the largest takeaways that evening.

Two months later, Kelly was back at Bethlehem Central to accept her induction into its Hall of Fame.

Bethlehem is predominately white. It’s not a newly developed fact. Kelly’s family moved to Delmar when she was 9. A peek into the high school’s 1970 yearbook, the year in which she was born, shows an ideal suburban lifestyle. One page shows a couple of teenaged girls in plaid skirts flying kites. Another page captures the image of a young man pushing a young woman on a tree swing. It’s rural America frozen in black and white as it transitions into the Space Age yet all of the senior portraits are White. It hasn’t changed by much over the years. The 2000 U.S. Census recorded 94.74 percent of town residents as White. In today’s political climate, defined by Black Lives Matter and police reform, the town’s residential makeup has become a talking point.

Kelly’s upbringing in the town has also been a talking point on a national scale. She sparked outrage when she told her viewers that Jesus Christ was White in 2013. In the same Slate segment, she said Santa Claus was White, too. She tried to take the comments back two days later by calling them “tongue-and-cheek.” Five years later, she sparked more controversy after she attempted to defend Luann de Lesseps’ use of blackface while dressing as Diana Ross on an episode of “Real Housewives of New York.”

“Political Correctness has gone amok,” she said to open a segment about Halloween costumes on her NBC show “Megyn Kelly Today.” “This year, the costume police are cracking down like never before.” The 2018 segment continued to report how the University of Kent listed cowboys, Native Americans, Mexicans, Catholic nuns and now-convicted sex offender Harvey Weinstein as offensive costumes.

Kelly was joined by President George W. Bush’s daughter Jenna Bush Hager, NBC News’ Jacob Soborhoff and TV host Melissa Rivers. Each laughed as they all shared memories of dressing as cowboys in their childhood and how Rivers’ mother, the late comedian and television personality Joan Rivers, once went as a pregnant bride. It went south after Soborhoff expressed his gratitude for living in American, having the freedom of expression, to “dress like an idiot, act like an idiot, and actually dress and be racist, then someone should be able to say something to somebody.”

“But, what is racist?” Kelly asked. “Truly, you do get in trouble if you are a White person who puts on blackface. … When I was a kid, that was okay as long as you were dressing up as like a character.” When she broached de Lesseps’ costume she asked, “who doesn’t want to be Diana Ross?”

Soborhoff responded, “I have not seen it, but it sounds kind of racist.”

Rivers attempted to deflect the situation by suggesting de Lesseps should have dressed as Michael Jackson, alluding to the late artist’s bout with vitiligo.

Five days later, after a series of apologies including one shared on “Today,” NBC canceled Kelly’s show. The moderately-liberal news outlet’s courtship with the conservative personality came to an abrupt end. Less than three months later, NBC terminated its contract with her just short of two years.

The former primetime news anchor launched Devil May Care Studios last month. According to the new media network’s press release, content will focus on “the latest news, current events, legal and cultural issues with the same tough, fair, smart perspective that has made Kelly one of America’s most respected broadcast journalists.”

“The press, of which I’ve been a part of for many years now, is unlike I’ve ever seen before.” Kelly said at the start of her first episode. “I feel like it has abandoned any semblance of objectivity. … Most of the media today expresses fealty to one side or the other, to Trump or to destroying Trump. Now, its fealty is to the toxic religion of wokeness. Policing people’s words and their thoughts.”

As of last week, Kelly’s audio podcast appears to be the only show carried by the purported independent network. Devil May Care is supported by Red Seat Ventures, associated with legal commentator and journalist Nancy Ann Grace.

Her social media has vamped up in recent weeks. There are promotions for her podcast. She used Twitter to provide a live critique of the recent presidential debate. Overall, she appeared to stay down the middle with her criticism and praise for both Trump and Joe Biden. She still goes against the grain of mainstream media, sometimes retweeting articles such as those praising Trump’s foreign policy.

Other shared items point towards what one OutKick article that blamed “political dishonesty” for the “prevailing sentiment propagandized by BLM that police are intentionally targeting black men is a political ploy.”

The shared tweet was noticed by local social activists now calling for Kelly to be removed from Bethlehem’s hall of fame. The online petition on Change.org currently has more than 300 signatures.

“Megyn Kelly is a terrible representative of what Bethlehem claims to stand for,” states Avery Roach after signing the online petition. “If someone is to look up to her that is a problem. BCHS should take its own slogan to heart: Be the change.”