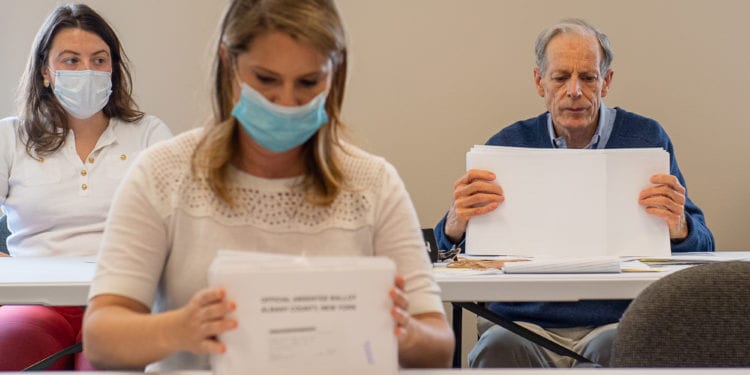 And, the party has a new Board of Elections commissioner. Matt Clyne opted not to seek another four-year term and the party recommended the Legislature appoint Kathy Donovan to the position.

“The biggest plan we have right now is to bring more money into the party and strengthening and unifying the party,” Crawford said. “We have had some tough primaries over the past four or five years, and we are going to build up stronger candidates and win more Albany County areas, particularly in the suburbs and the hilltowns.”

Crawford has been a county committeeman for 13 years and has chaired the Guilderland committee for the last four. He said he has not seen the political climate as nasty, locally and at the national level.

“Politics is a civic duty and public service, and I would hope we can get back to that and not continue the current tone it is taking on,” he said.

Clyne, of Bethlehem, was first appointed as a Board of Elections commissioner in 2008. He has not endeared himself to many party faithful in the position that is half governmental, ensuring fair and open elections, and half political, helping candidates with the mechanics behind getting elected.

He most recently came under fire for refusing to wear a mask while counting absentees during the Democratic Party primary featuring District Attorney David Soares and challenger Matt Toporowski.

Donovan, of Cohoes, worked in the Board of Elections for some 35 years before retiring. She is coming back for another four-year term, provided the Legislature approves the recommendation, which is expected.

Crawford will take the reins from Jack Flynn, who served as chair since 2016. After beating out then City of Albany Common Council President Carolyn McLaughlin, who is now an Albany County legislator, for the job Flynn had a falling out with Clyne. Clyne fired Flynn from his $48,000 post at the BOE but Flynn was picked up by Sheriff Craig Apple. Flynn had earlier expressed interest in the $90,000-plus a year commissioner’s job.