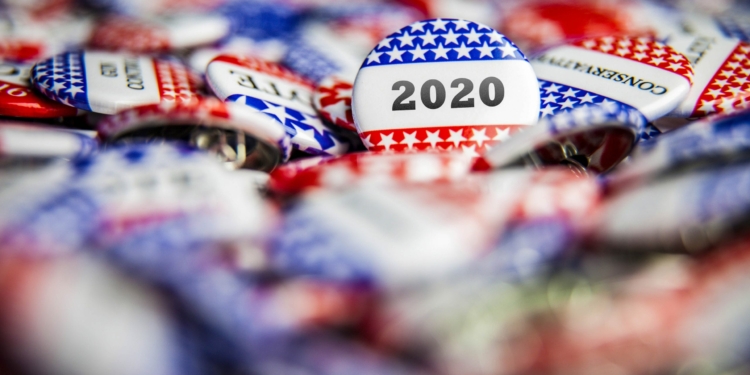 ALBANY COUNTY — Like many other things in the world, the COVID-19 pandemic is already affecting the general election for November.

The Albany County Board of Elections is faced with keeping the voting process as efficient as possible while meeting the several concerns of voters. As Gov. Andrew Cuomo has issued several executive orders for this election, voters are left with more options than before.

Albany County Board of Election commissioners Matthew Clyne and Rachel Bledi are working hard to ensure everyone in Albany County has ample time to cast a vote.

“It’s going to be all in for counting these ballots,” Bledi said. “It requires us to have a game plan going in and for us to work together to be as efficient as possible.”

Clyne agreed, adding the exact plan has yet to be determined, but he and Bledi are expecting an influx of ballots this election. “This is going to be very time consuming, but with the balance of early voting and those who will come out on Nov. 3, it should help alleviate crowding.”

Bledi and Clyne implore voters to understand the results will be a bit later than normal this year due to the influx of absentee ballots and the expected number of voters. Still, Bledi said she hopes to have everything counted within a couple of weeks, adding “people should not have to wait a month to learn who won an election.” Bledi and Clyne said all ballots, both physical and absentee, need to be in the office by Nov. 10, and from there results should flood in within a timely period.

The Albany County League of Women Voters (ACLOWV) advocates for increased knowledge and resources around the voting process. Patricia Sibilia, president, said voting is important, specifically in local elections, because the result can be decided based on a handful of votes.

“In national elections, it’s a little different, but there are several instances locally where an election has been decided based on under 100 votes,” she said. “People like to say voting is irrelevant because their vote doesn’t count, but that could not be further from the truth in our local elections.”

Sibilia added local elections are also the place where change that actually affects residents happen. “These representatives are the ones that create policy that directly impacts you the most,” Sibilia said. “They are the ones who decide when your roads are fixed, what your library looks like, if you have a local park and other local policy that can enhance quality of life. Change starts at the local level, where policy is created specifically for your neighborhood.”

Clyne, Bledi and the ACLOWV are working hard to get voting options out to residents. The BOE sent a flyer to Albany County residents, which started hitting mailboxes on Sept. 10.

There are three options for casting your vote in November. In fact, some of the election processes have already started. By Sept. 18, absentee ballots will begin to be sent out. There is still time to register to vote and request an absentee ballot.

The deadline to register to vote for the 2020 November election is Friday, Oct. 9. This is the last day for registration to be postmarked and must be received by the Board of Elections, or BOE, by Wednesday, Oct. 14. To register to vote, go to the Albany County BOE website. To check your registration status, go to voterlookup.elections.ny.gov.

Despite the deadlines recommended by New York State, the post office has advised that they cannot guarantee timely delivery of absentee ballot requests applied for less than 15 days before the election. To ensure your application for a ballot is received by the BOE, request one as soon as possible.

To cast your absentee vote, make sure a series of steps are followed. Upon receiving your ballot, mark it according to your choices for office. After you complete filling out the ballot, fold it and place it in the security envelope. This is the envelope with a place for your signature. Be sure to sign and date the envelope in the designated spot, then seal it.

There are four ways you can return your ballot. You may put it in the mail, making sure it is postmarked no later than Tuesday, Nov. 3. You can also bring it directly to the BOE or an official polling site by 9 p.m. on election day. To vote early, bring the ballot to an early voting poll site between Saturday, Oct. 24 and Sunday, Nov. 1.

USPS recommends that voters allow plenty of time for marked ballots to be mailed back to the BOE, generally seven days before the election. New York State requires ballots to be both postmarked by Wednesday, Nov. 3 and received by Tuesday, Nov. 10. Even if your ballot is postmarked by Nov. 3 and gets lost in the mail, if election officials do not receive the ballot by Nov. 10, the ballot will be voided.

Bledi added voters are able to call the Board of Elections with any questions about their application or the status of their ballot. As the election draws closer and the office gets more overwhelmed, the option will be sparse, but it is early enough to literally follow your ballot back to the BOE, where you can confirm with a representative if your ballot was received and in good standing.

Voters will have a choice of nine designated days for early voting, including weekends.

“Early voting cuts down the amount of people at polling stations on the day of the election,” she said. “This is especially advantageous for those in the city, where lines can stretch hundreds of people and waiting times can be astronomical.”

Sibilia said early voting is the exact same process as if you were to physically show up on Tuesday, Nov. 3; you enter a polling station and check in with an election worker. You sign in and you receive a ballot. You then fill out your ballot at a designated booth and tender it in the designated spot.

“There is really no difference between early voting and voting on Election Day,” Sibilia said. “You just won’t have results the day you cast your ballot, but this election will not have those instantaneous results anyway due to the influx of absentees.”

Early voting is especially important for Albany’s senior population. The Bethlehem Senior Services Department and Colonie’s counterpart is extending options for its clients to vote safely.

Both Colonie and Bethlehem are offering transportation to seniors who are looking to get to early voting, albeit limited. Due to social distancing, vans cannot hold as many people.

“We can only put four people in a van now, where we used to be able to transport 13 people at a time,” William Vail, acting director, said. “We will also be prioritizing medical appointments for our clients, so transportation might be affected if there is an issue that needs to be addressed immediately.”

Despite the pandemic dealing the senior population a harsh risk, Colonie director Diane LaCivita said her seniors are expressing a bigger interest in voting than ever.

“I’ve been here for four years and I do not remember this much interest in an election,” she said. “We’re doing our best to make sure we make options visible to everyone, both through word of mouth here and mailers going to residents.”

Vail and LaCivita said seniors have adapted well to the obstacles, adding workers have been modeling behaviors like mask wearing and social distancing.

Rumors are swirling that if your signature on your absentee ballot is different than the one on record, your ballot will not count. Sibilia said that is not true.

If you are physically going to the polls this fall, you will be face to face with an election worker. Sibilia said election workers reserve the right to ask for official identification for any reason, including if someone’s signature is way off from what is on record. Even with that precaution, Sibilia said it’s rare that someone is so off that election workers cannot recognize it.

If you are casting via absentee ballot, election workers are obligated to call the voter and will give instructions on how to rectify the issue. Sibilia said there’s an option called an affidavit ballot that involves the court, but it’s an extremely arduous process.

“Election workers are legally obligated to contact voters with any problems in a certain time frame,” she said. “If there is a problem with your ballot, you will hear from them before it is voided.”

Along with the Board of Elections website, the ACLOWV has a website, www.vote411.org, that has resources including information about those on the ballot. Sibilia said it also should have instructions on how to fill out your ballot.

The New York State Attorney General’s Office also has a hotline where voters can ask questions or report any illegal behavior. To contact the hotline, call 800-771-7755, or email [email protected] Sibilia said the hotline is a great resource for voters to learn what is legal at a polling place.

It’s Going to be Ok

As fear grips many residents and COVID-19 threatens a second wave this fall, Albany officials know it’s a difficult time for all. However, Bledi said there are plenty of safe options for voting and residents should not be concerned.

“If you are absolutely apprehensive about showing up physically, I can promise you voting via absentee ballot is safe and we encourage you to cast your vote from the comfort of your home or office,” she said. “If you’re super concerned about mailing your ballot, come down to the office and fill out your ballot in your car. We will take it from you immediately upon turning it in and it will be safe.”

Clyne concluded with the number of options and the time allotted, there is no reason for someone to miss out.

“We ironed out a lot of kinks from the primary election and we are ready to get this going,” he said.