BLM protester charged with harassment for alleged actions on July 4 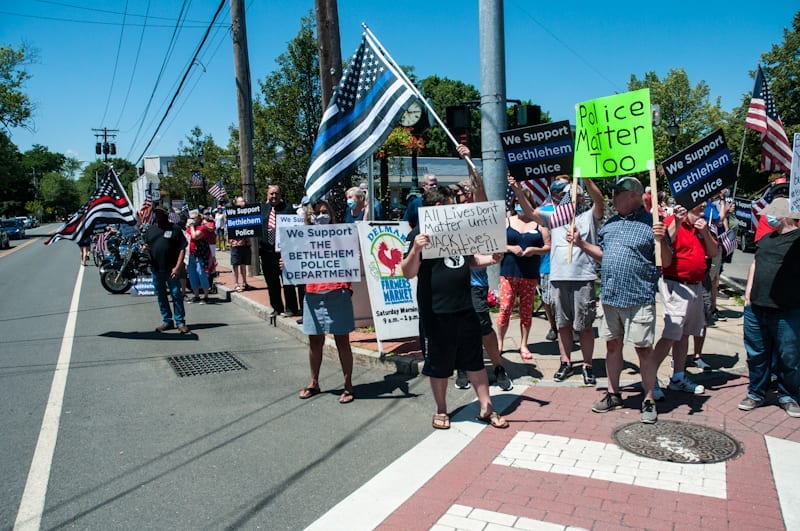 BETHLEHEM — A second person faces a harassment charge for alleged actions during two opposing rallies at five corners on July 4.

Wiggand in turn filed one against Lauricella.

Wiggand was in court earlier this month where he pleaded not guilty to the violation. He is due back in court next month. Lauricella is due in front of a judge on Oct. 6, according to Bethlehem Town Court.

On Wednesday, Sept. 2, Lauricella said he had not yet received a summons.

Wiggand held the rally to support Bethlehem police at Five Corners in response to a number of Black Lives Matter protests around the nation following the death of George Floyd at the hands of Minneapolis police officers. Some protests devolved into violence and looting and a common theme was to disparage and/or defund the police.

The BLM supporters in Bethlehem decided to hold a counter protest and it was initially slated for in front of Town Hall. That group migrated to five corners and congregated on an opposite side of the road as the Back to Blue folks.

Bethlehem police, the State Police and Albany County Sheriff’s Department were on the scene keeping the two sides physically separated while they shouted at each other and chanted their own slogans.

Lauricella, though, went from the BLM side of the street to the BTB side and confronted Wiggand.

Wiggand wasn’t too happy about that, and admittedly took the sign from Lauricella and ripped it up. He also allegedly knocked the cell phone out

of Lauricella’s hand. Lauricella, and others, were capturing the exchange on video — before Wiggand knocked the phone out of his hand.

“I am hurt and appalled at the same time, an honest upright citizen cannot support their local law enforcement without being taunted and denigrated by these Marxists,” Wiggand, the town’s former Republican Party chairman, wrote on his Facebook page. “Well, I refuse to back down. I refuse to be intimated by these pukes.”

“My thoughts on a non-criminal violation charge are unimportant,” Lauricella said. “What is important is ensuring the officers who murdered Breonna Taylor are arrested.”