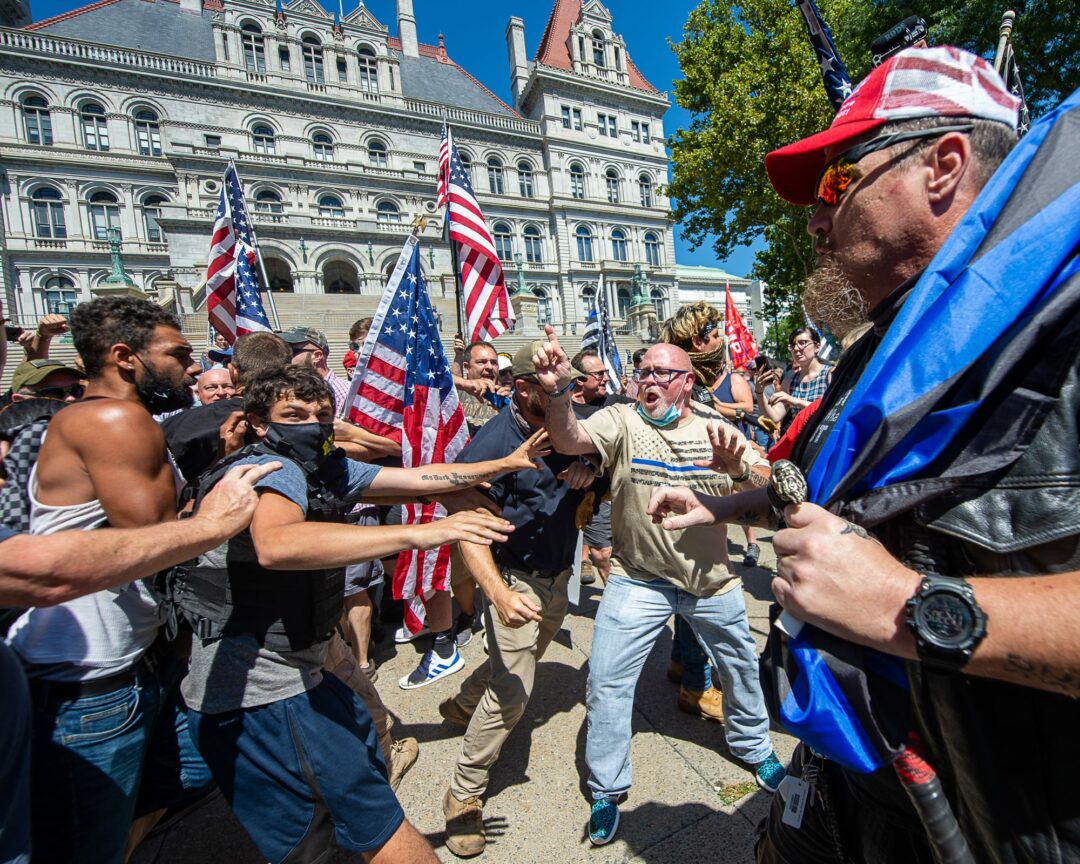 ALBANY — A Back the Blue rally could have gotten ugly after a dozen or so Black Lives Matter protesters crashed the party. But, it ended with just some pushing and shoving and a bit of screaming and yelling.

The rally, held on Saturday, Aug. 1, outside the state Capitol in Albany, was held to answer the near-daily protests calling for a defunding of police departments. In some areas, including Albany, the protests have devolved into riots with millions of dollars of damage done.

A number of speakers took to the podium to voice support of police in front of a crowd of about 600 flag waving people.

“This is about thanking and standing with law enforcement. It is about sending a crystal clear message to the entire state … we Back the Blue,” said state Sen. Daphne Jordan, R-District 43. “When you call 911, they don’t ask your political affiliation or who you voted for they ask what is your emergency. Sadly, we’ve seen our best and bravest endure acts of violence, threats and intimidations. The police have always had our backs and now it’s time we do the same.”

It reads, in part: ”Support from our residents will strengthen the bond between law enforcement and the communities they serve and provide much needed reassurance to officers facing dangerous and uncertain situations that they will be backed by the public. We must do our part to as a community to provide all people with an understanding of what sworn officers do and further educate and equip law enforcement agencies with the funding and resources they need to effectively perform their duties.”

Melody Burns was the emcee and other speakers include state Assemblyman Jake Ashby and Chris Tague, Republican state Senate candidate Rich Amedure and Liz Joy, who is running for Congress against incumbent Rep. Paul Tonko.

As Albany Police Officer Patrick McGee stepped to the microphone, saying some politicians have turned criminals into heroes and cops into criminals, about a dozen Black Lives Matter protesters came to the center of the crowd and began chanting. They were quickly surrounded and drowned out and pushed toward the Washington Avenue side of the Capitol.

There was some pushing and shoving and the State Police and Albany police worked to keep the two groups apart.

At the end, both sides seemed to calm down without a punch thrown and they listened to a speech by Manetertep El Day, founder of the Albany House of Peace.

“We have the same concerns and issues. We are not here to make the same mistakes and paradoxes. One bad apple does not represent the whole bunch,” he said. “We have people here to disrupted this gathering, and we have Caucasian brothers and sisters who represent hatred.

“Our job is to unite the human family. And not be moved by stereotypes. Not be moved by biases and old paradoxes and the same mistakes of the past. If your heart and mind is not moved by hatred or malice. If you do believe the Constitution is the supreme law of the land. Then we have the same views and concerns and we are affected in the same way. We are moving forward with different agendas. We need to move forward together. In 2020 it is our job is to unite the human family.”

SPOTLIGHT ON BUSINESS: Delmar Dental is a pioneer in dental sciences