Butterfly is taking off in the Pine Bush 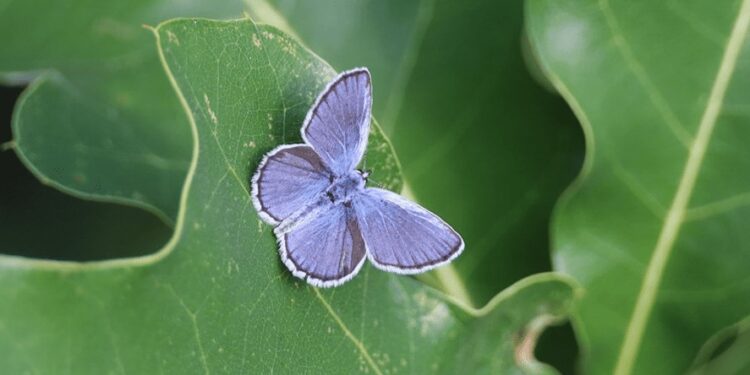 Courtesy of the Pine Bush Preserve

The Karner Blue butterfly is blooming.

From a just a few hundred and on the brink of extinction, the population of the quarter-sized butterfly has been more than 7,000 for the last seven years.

“In a laboratory, protected from weather, predation and disease, we have seen that Karners have a high reproductive capacity, with individual females successfully producing hundreds of offspring,” said Albany Pine Bush Preserve Commission Conservation Director Neil Gifford. “Conditions in the wild are seldom that perfect, but every once in a while things can line up, and that’s what we believe we are witnessing in the preserve right now,” he added.

The butterfly was listed as endangered in 1992 by the U.S. fish and Wildlife Service and are still a protected species.

The Pine Bush, which encompasses some 3,350 acres of land, has initiated a number of programs to help foster a habitat conducive to breeding the butterfly including controlled burning, forest thinning, restoration seeding and environmental education.

While the current population size cannot be calculated until the season has ended, staff report counting hundreds of butterflies on their surveys at sites throughout the preserve.

“The numbers of butterflies we are seeing this month is unlike anything previously documented in the preserve,” said Field Ecologist and Entomologist Amanda Dillon, who has been conducting annual surveys since 2010.

The quarter-sized Karner blue butterfly was identified in the 1940s by novelist Vladimir Nabokov at the Pine Bush in the New York hamlet of Karner. The USFWS estimates that when the species was protected as endangered 28 years ago, the range-wide population had declined by up to 99 percent.

“Thanks to  our key partners at the state Department of Environmental Conservation and the critical support we receive from the state Environmental Protection Fund, the commission continues to build the preserve, manage the world’s best remaining example of an inland pitch pine-scrub oak barrens, and offer truly unique recreational and educational opportunities,” said Commission Executive Director Christopher Hawver.

BETHLEHEM LIBRARY: Books out and about