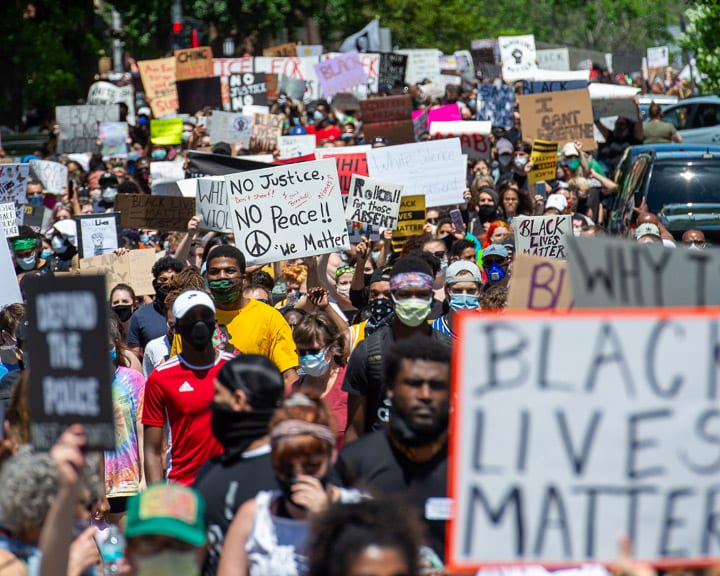 Protesters walk form Townsend Park through Washington Park in Albany, New York on Saturday, May 30, 2020. It was one of many protests across the nation calling for justice in the death of George Floyd at the hands of Minneapolis police officers and other black people who suffered the same fate (Jim Franco/Spotlight News.)

While overall, 60 percent of New York voters think the killing of George Floyd and Rayshard Brooks are indicative of a broader pattern of excessive force by police against Black people, there are wide political and demographic differences.

According to a poll by Siena College Research Institute of registered New York voters, 80 percent of Democrats say the killings at the hands of police are part of a broader pattern while 57 percent of Republicans and 48 percent of independents say they are isolated instances. Although 53 percent of white voters say it is part of a pattern, that view is held by 64 percent of Latinos and 91 percent of Black New Yorkers. New York City voters see a pattern 72-23 percent, while upstaters agree 55-39 percent.

The killings at the hands of Minneapolis police sparked protests across the country, many of which turned to riots — some of which are still going on.

According to the poll, 75 percent of Democrats, New York City voters and voters under 35, as well as 88 percent of Blacks, support the rallies. The majority of Republicans, 58 percent, though, oppose them because too many have turned to rioting and looting.

Eighty percent of the people did not participate and nobody in their household participated.

The rallies did bring reform in how police do their work and talk of more reform to come.

According to the poll, 42 percent of New Yorkers feel more secure when they see a police officer, compared to 20 percent who feel less secure and 35 percent who are unaffected.

This Siena College Poll was conducted June 23-25, by calling 806 registered New York state voters. It has an overall margin of error of +/- 3.9 percentage points

Legislature to ban all fireworks in Albany County

A PATRIOT REMEMBERS: Prayers and trains