by Jim Franco
in News
0 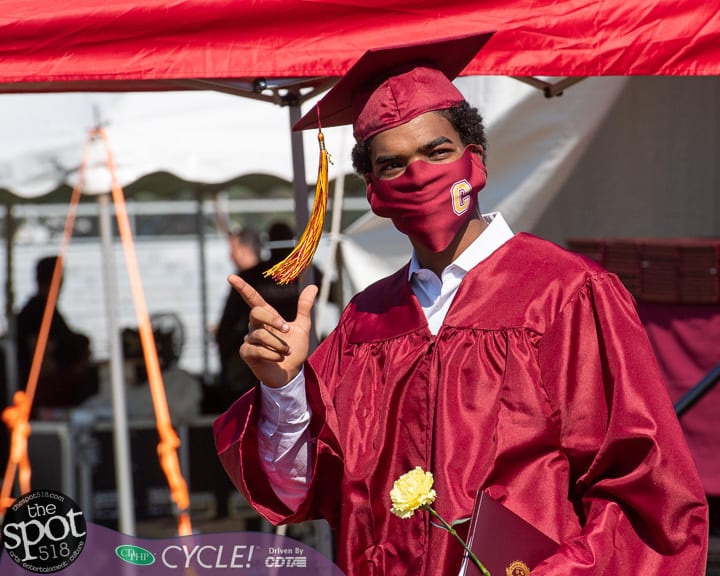 COLONIE — It wasn’t a typical graduation, but more than 350 Colonie High seniors did get a chance to walk across the stage on Friday, June 26 to receive their diploma.

The district opted to have a series of graduations, with 25 students at a time, sitting in chairs six feet apart along the track, while district officials made brief remarks to each group before announcing the student’s name and inviting them to walk across the stage. Each student was allowed four family members, who were sitting on the bleachers with six feet between each entourage.

It had the makings of a logistical nightmare, but the beautiful, sunny day went off without a hitch with 15 groups of students having their own mini-ceremonies from 9 a.m. to about 3 p.m.

The chairs and bleachers were sanitized between each group and flowers were given, hugs exchanged and photos were taken quickly in the parking lot before the graduates and their families were shooed off campus to make way for the next group. And, of course, everyone wore a mask.

The district, as per state guidelines to stop the spread of COVID-19, opted for a series of smaller graduation ceremonies, unlike other districts who are doing drive thru ceremonies either on their respective campuses or at outside facilities like a drive-in theater.

TRIPLE THREAT: Trying times test us, but we have to move forward