A Glenmont family nurses baby squirrel back to health, turns into a teachable moment 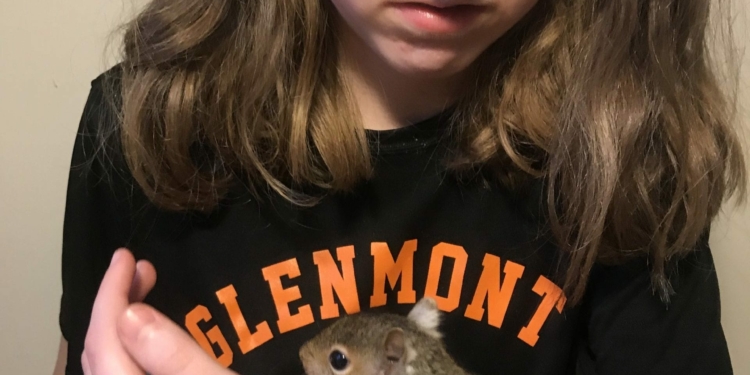 During a time when we are all distancing, one family came together to save the life of a squirrel.

One day, Debbie Wooster, a local elementary school teacher, received a call from her son Henry. He had found an injured animal on the road and asked her to come to save it.

Wooster drove the squirrel home, cleaned it up, and tried to play a squirrel baby distress signal where they had found the squirrel with the hope that the mother would hear it. When the mother did not return, the Woosters did not give up on saving the tiny squirrel’s life.

“We brought it home and researched how to take care of it,” Wooster said. Over the next few weeks, the Woosters did everything they could to help rehabilitate the squirrel: bottle feeding, creating a cozy home in a box, and ensuring he was fed.

A few days later, “Nutkin”, the name they gave the squirrel, opened his eyes for the first time. Once this happened, the Woosters knew that they would have to return Nutkin to the outdoors soon.

“We wanted to make sure we did what was right by him because we wanted him to be free,” Wooster said.

To do so, the Woosters began giving Nutkin outdoor training in their chicken coop.

“And then he transitioned from there on his own back out to the trees. He’ll still visit in there, and he still comes to our house to visit,” she says.

But Wooster saw this as more than just rehabilitating an animal. She also employed Nutkin to provide a teachable moment to students.

Over Zoom, Wooster joined classes to show-and-tell about Nutkin and provide a lesson in science, writing and empathy.

“They eventually started sharing stories of when they have saved someone or something or an animal,” Wooster said. “It was a good discussion on empathy.”

The Wooster’s compassion has shown us that, especially during these times of distancing, we can all take steps to come together.

LETTER to the EDITOR: Can’t stay closed any longer