Confusion over reopening the Capital District

ALBANY — As five regions in the state enter Phase I of reopening today, there is confusion in the Capital District including the time frame of hospitalizations.

County Executive Dan McCoy said he has no choice but to follow state guidelines, since the governor signed an Executive Order taking the authority from local leaders, but he is not sure what they are.

“We are trying to play by their rules and on their field but they continue to adjust their rules,” he said during his daily briefing on Friday. “We will adjust, and I’m not going to finger point. We are doing the best we can under the information and guidance we are receiving that changes every second of the day.”

For example, earlier this week, the Capital District met six of the seven metrics required by the state to reopen. A day later, it fell short of the required two weeks of decline in hospitalizations or a three-day average of less than 15 new hospitalizations over the same time frame. It also falls short on a 14-day decline in hospital deaths or three-day average of fewer than five deaths over the same two-week time frame.

Thursday, he said the Capital District would not have to reset the two-week clock but a report in the Times Union, quoting an aide to Gov. Andrew Cuomo, said it would have to begin again and the earliest it could open is May 27.

“I read that the earliest we can open is May 27, and that was news to us,” McCoy said. “Sometimes the right hand doesn’t know what the left hand is doing.”

Five of the state’s 10 regions — the Mohawk Valley, the Finger Lakes, the Southern Tier, the North County and Central New York — will begin Phase I on Friday. Cuomo extended New York on Pause Executive Order until May 28 but said “if a region hits its benchmark at any time regardless of the pause order that region can open.”

“We are being updated on real time. What we had heard originally, is that if there is a hiccup and we fall back after meeting the metric it doesn’t have to be a 14-day count but this could change,” said Dr. Elizabeth Whalen, head of the county Health Department. “There is a lot of dynamic data and dynamic guidance we are getting that does change from day to day so anything I say to day may change later today or tomorrow.”

At issue in the Capital District — which includes Albany, Saratoga, Rensselaer, Schenectady, Warren, Washington, Columbia and Greene counties — is hospitalizations and whether the admissions are coming from outside the area. There are other discrepancies between the number of positive cases on the COVID-19 dashboard and the number found on the state dashboard. The high number of cases and deaths in nursing homes, too, should be considered separate from the general population, McCoy has said.

As for hospitalizations, Whalen said she has a more accurate data than the state because her department talks to the patients and the state looks only at aggregate numbers.

“We pull data off that list and we look at each patient and if the patient is from outside our area we forward that information to that county,” she said. “So right off the bat there is a discrepancy in data from what is on the databases and what you actually find when you contact and speak to the person. 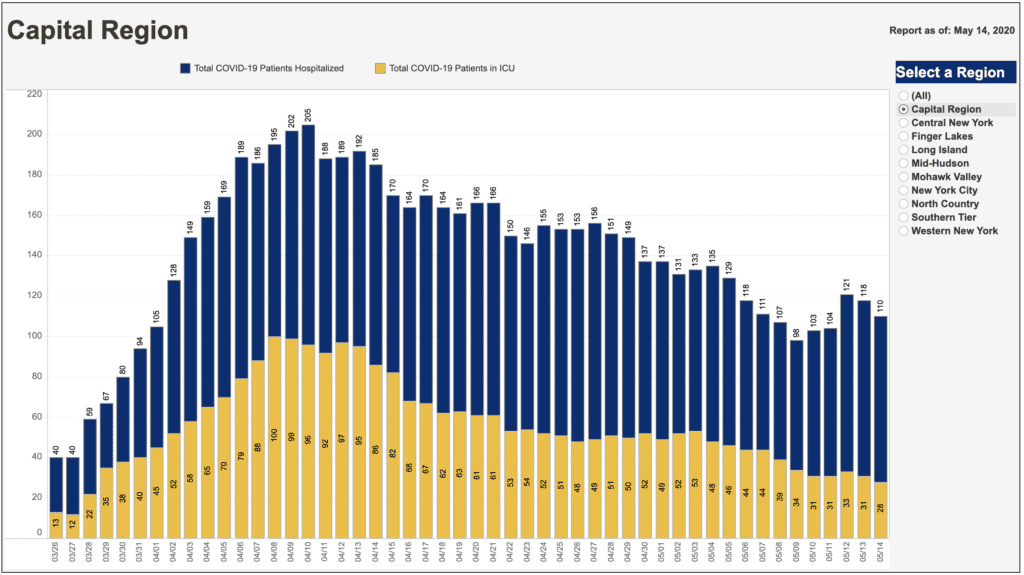 “We feel comfortable our data is an accurate representation of disease in the community and we have these conversations with the hospitals on a daily basis to see what they are seeing.”

Albany Medical Center Hospital and St. Peter’s Hospital have historically taken patients from outside the Capital District and that has not changed with the pandemic.

McCoy and Whalen said they continue to go through the data and will report to the Capital Region Control Room, which is charged with monitoring the infection as regions reopen, and will have more information on the hospitalization discrepancy by Saturday.

“We are debating the hospitalization numbers and we are sending it up to them to show them they are calculating this wrong and hopefully after we do that we will get the green light,” McCoy said.

Meanwhile, McCoy said Saratoga County is formulating its own plan to reopen separate and distinct from the other seven counties.

“They feel our hospitalization rate is holding them back. They are 45 minutes north and they feel like they had different needs,” McCoy said. “They feel they put their own plan together and they definitely don’t want to be a part of us because they feel like we are holding them back. When this first came out, honestly, I thought it was going to be Albany, Rensselaer and Schenectady counties.”