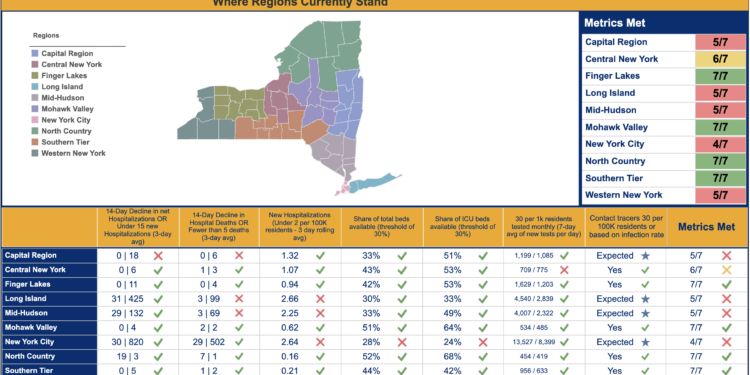 ALBANY — The eight-county Capital Region lost a metric on Wednesday and now only meets five of the seven parameters established by the state to reopen the economy.

But, on Wednesday, based on data reported Tuesday, hospitalization in Capital Region — Albany, Schenectady, Rensselaer, Saratoga, Columbia, Greene, Washington and Warren counties — went above that benchmark.

It also does not meet the required 14-day decline in fatalities due to the virus at hospitals or fewer than five deaths on a three day average over two weeks.

According to the state, from Monday to Tuesday the number of patients being treated in a Capital Region ICU went from 31 to 33 and the number of COVID-19 hospital patients jumped from 104 to 121.

Earlier in the week, Albany County Executive Dan McCoy said the state should consider facilities like Albany Medical Center Hospital is a regional hospital and takes patients from all over the state, not necessarily just from the Capital District and should be a factor when considering the hospitalization rate.

He also asked that nursing home patients transferred to a hospital be taken out of the equation since nursing homes present a unique set of issues not shared among the general population — namely, the residents are among the most vulnerable and live in a congregate setting.

As of his daily briefing on Wednesday, he said he did not get a firm answer.

The state was shipping COVID-19 patients to upstate hospitals from the hard hit areas of downstate to open up beds, beds that were never used.

Four regions of the state can begin opening construction, manufacturing and retail with curbside pickup on May 15: the Finger Lakes, the Mohawk Valley, the Southern Tier and, most recently, the North Country.

Long Island, New York City, the Mid-Hudson, Central New York and Western New York will not open on May 15.