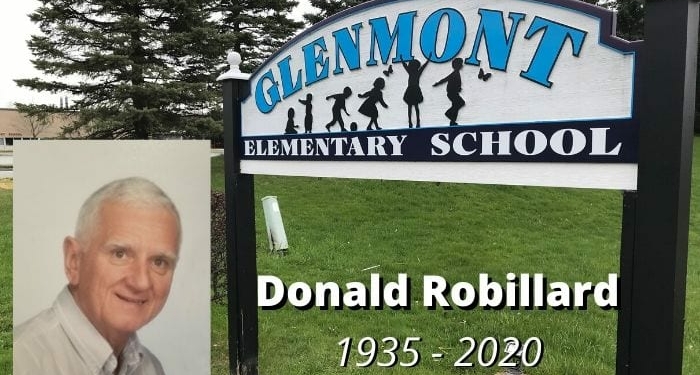 Bethlehem Central Superintendent Jody Monroe said Robillard brought “a spirit of innovation to the school and to the district.” She credited him with seeking out partnerships with community leaders to develop programs. She also called him a “tireless advocate” for the community, seeking the safety of his students and their families, as commercial development blossomed around the school.

“What he will probably be remembered for most, however, is the school’s motto, ‘Care about yourself; care about the people and things around you,’” said Monroe. “Decades later, that motto carries on at Glenmont, and the values they reflect have probably never been as purposeful as they are right now.”

When Robillard retired in 1995, staff and students threw a celebration for him. Seated upon the stage inside the school’s auditorium, he pulled out his harmonica and taught the children one more lesson.

“Close your eyes and see if you can sense a feeling,” he said. “Music can express feelings when words don’t always come.”

Robillard spent 22 years as principal of Glenmont Elementary, often greeting his students in the front lobby. His family described him as a patient teacher who took excitement from guiding children through new tasks. However, he was especially proud of his school’s accomplishments while principal at Glenmont. It was the pinnacle of an educational career that included roles as a third- and fifth-grade teacher, and principal of his hometown Watervliet High School.

“I thought he carried himself with dignity and class,” said John Furey. Before retiring from Niskayuna School District in 2016, Furey coached and taught physical education at Bethlehem Central, including Glenmont. “Even though he was a peer in a sense, I always called him Mr. Robillard because I respected him a great deal.”

Glenmont earned the first of two National Blue Ribbon School awards in 1990. The honor, awarded annually by the U.S. Department of Education, identifies schools that model successful teaching and learning. Glenmont earned the award while the school building was in the midst of expanding to address growing attendance numbers. According to a Spotlight News article written by Susan Graves, classes had spilled over into the gymnasium and cafeteria, while other students were farmed out to other schools within the district.

“Problems are not obstacles here,” said then-Glenmont art teacher Gale Derosia. The leading observation Cecil Mosenson made while evaluating the school for the award was that there seemed to be no compromise in quality, despite the challenges presented by construction and overcrowding. Much of the staff credited Robillard for his willingness to try new ideas.

“He always encouraged us to take risks and that we often learn by making mistakes,” said Dave Ksanznak, a school principal for Hamagrael Elementary. “Don was an ex-marine who always led by example. Because he trusted you and believed in you, you wanted to always give 100 percent to the kids and community.”

Towards the end of each academic year, Glenmont’s fifth-grade students attend Nature’s Classroom, a three-day outdoor education program in Massachusetts. It was a tradition Robillard started, Ksanznak said. It allows kids to take a trip away from home while experiencing science experiments with light, nature hikes, dissections and historical role-play.

“He was a great guy to work for as he got us what we needed and let us try different things to make learning a memorable experience for the students,” Ksanznak said. He brought in guest authors and artists in residents for plays and activities. Ksanzank said he also helped build the Glenmont Big Backyard and an authentic Dutch barn at the school.

Ksanzank’s presence at Hamagrael Elementary is just as revered with today’s students, who often greet him as “Mr. K” at the start of each day. Ksanzank said he still carries on the things he learned from Robillard.

“It is said that the way to honor others is to emulate them,” he said. “To this day with all of the technology at our fingertips, I still do my classroom observations on a yellow pad in longhand. That is how I watched Don Robillard do them over the years and it is my way of honoring a man who I owe my BC career to.”

Last year, nearly 25 years after Robillard retired from the school district, Glenmont Elementary earned its second National Blue Ribbon School award. When the school earned the distinction, Glenmont Principal Laura Heffernan said Glenmont’s motto to “Care about yourself; care about the people and things around you,” exemplified the school community.

“Just walk through our doors, and right away you will see that Glenmont cares,” she said.

Robillard excelled both academically and athletically at Watervliet High School. On the baseball diamond, he is remembered as a star pitcher for the Cannoneers. In the classroom, he was voted vice president of his class. As a talented artist, he lent his skills towards the high school yearbook.

After high school, Robillard joined the United States Marine Corp with a few of his high school friends. From there, he was trained and deployed to serve in the Korean War before he was called home after his father’s passing.

Robillard’s career as an educator was followed by an eclectic collection of vocations. He worked as a U.S. Postal carrier, as a lineman for Bell Telephone Company and as a collections officer.

Robillard cherished “every minute” reading and playing with his 11 grandchildren and two great-grandchildren, his family said. He was also described as a proud family man who took the time to care for his aging family and friends. He was a supportive and loving father to his four children, David, Kristen, Michelle and Jennifer.

In addition to spending time with family, Robillard enjoyed listening to jazz and classical music, attending live theater, reading non-fiction, health, fitness, boating and travel. Following his retirement, he enjoyed traveling with his wife of over 60 years, Katherine (Gorgen).

Burial will take place at St. Jean’s Cemetery in Troy. A memorial Mass will be scheduled at a later date. In lieu of flowers, please consider a donation to the Veterans of Foreign War organization in Robillard’s name. The family encourages friends, family and colleagues to share a memory or story at NewComerAlbany.com, which they will compile into a family memoir.