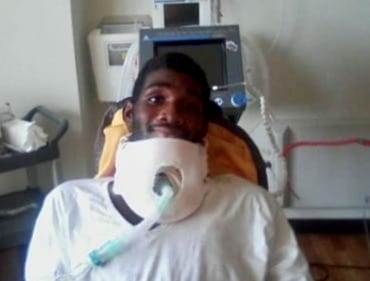 GUILDERLAND — Police donated a ventilator that was held in evidence from a 2012 stabbing that eventually turned into a murder, to help fight the COVID-19 pandemic.

In 2012, a 15-year-old, Adeujuan Adams, was standing near his bicycle outside a friend’s house in the South End of Albany. A stranger approached him and demanded he give him his bike.

Adams refused and the man, Juan Anderson, stabbed him in the neck. The knife nearly severed Adams spinal column and left him a paraplegic.

With support coming from across the Capital District, Adams was transferred to an acute care facility in George and then to an adaptive apartment in Guilderland, where he required the constant use of a ventilator.

The ventilator was secured into evidence in hopes that data could be downloaded from it. In light of the current pandemic and shortage of ventilators, Guilderland police officers drove the device back to the manufacturer, Landauer Medstar in the Bronx, in hopes it can be used to assist others.

“This young man’s life was tragically cut short, but the hopes that a device that once brought him some relief could be re-purposed to assist others is nothing short of extraordinary,” said District Attorney David Soares. “I remember how our community came together to help Adeujuan, and I know we will continue to unite and be innovative to overcome the scarcity of medical supplies and personal protective equipment.”