The hunt is on for rainbows across the 518 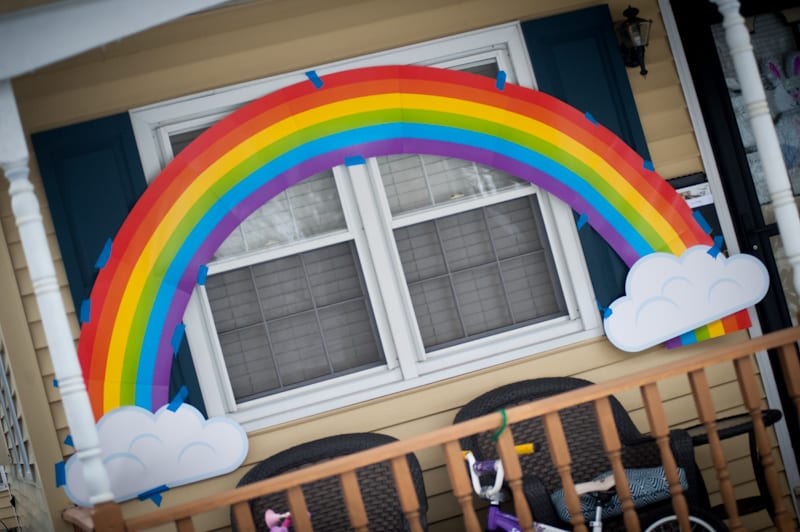 With more than 2.5 million children home from school across the state, families are finding a need to get outside and do something to preserve their state of mind.

A recent trend blossomed in area suburbs, with homeowners hanging

handcrafted rainbows for neighboring pedestrians to see. It’s a nonverbal message to kids, in particular, that says, “The greater the storm, the brighter the rainbow.”

Kristyn Dayter launched the 518 Rainbow Hunt newsgroup on Facebook last week. The Scotia mom of a 7-month-old claims rainbows as just one of the many things she identifies herself with, and that this idea is a means of keeping people connected in a time of social distancing.

“Rainbows, unicorns and glitter have always been my thing,” said Dayter. “They’re a perfect expression of my personality.”

Since starting the project six days ago, Dayter’s private group has amassed more than 55,000 members. Outside of starting a massive social experiment, she is a dental assistant and a photographer.

“I’m so overly happy that this little project has touched so many families and has been a good distraction for everyone in this uncertain time,” she said. “I can’t wait to see how far we can reach.”

Allison Armstrong, of Normanskill, adapted Dayter’s idea and took to Nextdoor.com to recruit local families on a similar endeavor.

“Basically, make a rainbow and hang [it] up in your windows or around the outside,” she said. “Kids and adults are driving and walking around to hunt for them.”

In four days, the idea spread across 26 neighborhoods in the Capital District.

The rainbow hunt is reminiscent of geocaching, where participants partake in search that involves finding clues online and embarking on a real-world expedition. However, unlike geocaching, there is no established list. People are encouraged to create and share, while others can passively discover.

“We went out walking this afternoon… searching for rainbows,” said Albany Aronow of Delmar. “My kids were so excited when they found one.”

Armstrong said she was happy to see how the idea has caught on from her perspective but was quick to share that it wasn’t her idea.

Readers can click here to find a Google Map showing thousands of rainbow locations throughout the 518.

“I don’t want to take credit for the idea,” she said. “I just wanted to share [on Nextdoor] to those neighbors who haven’t seen the Facebook group.”

The list of participants quickly grows with each passing day. Construction paper and crayons are the most common tools used. June Overdorf said she observed neighbors using flags, window signs and chalk painting around her Helderberg neighborhood. Some have also taken the opportunity to thank others in the community.

“I just put one up with a special thank you message,” said Mary Ellen Hoffman of Albany. That message of gratitude is shared with her paper carrier, postal carrier, parcel deliverers, healthcare and first responders. “Plus, all the essential workers who are keeping our city, state and country going. God bless.”

Amid pandemic, the Census goes on