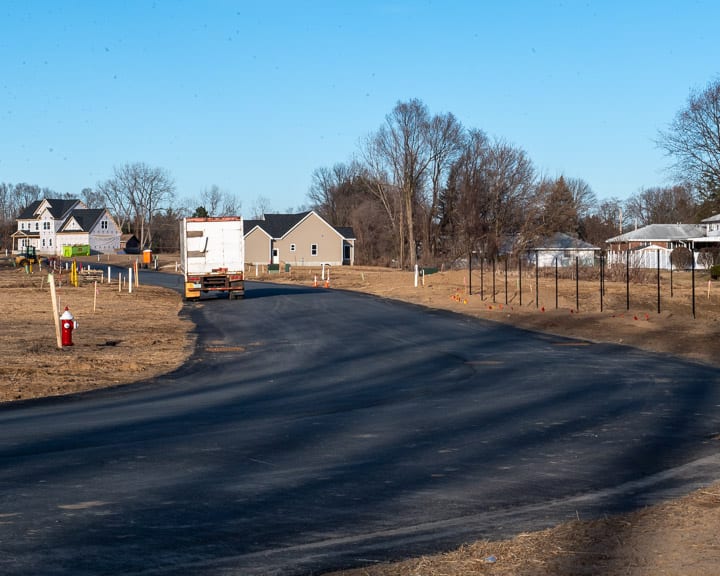 The subdivision on Donna Drive with the homes on Alfred Drive East to the right. (Jim Franco / Spotlight News)

COLONIE — The town shut down construction at a residential subdivision off Sand Creek Road because the developer encroached upon an agreed upon buffer zone by grading land beyond what was approved by the Planning Board.

A stop work order was issued on Feb. 12, said Town Attorney Michael Magguilli. The town alleges that order was violated on Feb. 20 when a Building Department employee spotted National Grid installing a gas line at the site, which is located off Sand Creek Road near Colonie High School.

“The only way he could lift the stop work order is going back to the Planning Board and having them come up with a remedy, if there is any, to protect the neighbors now that this one is gone,” Magguilli said. “I also told him he will have to pay a remediation fee, which will, I assume, be substantial because of the amount of grading he did.”

In July, 2018, the Planning Board gave Cillis Builders permission to build 24 homes on 12 acres of land on what is an extension of Donna Drive, which runs between Hackett Avenue, the main road leading to Colonie Central High School, and Alfred Avenue East. Donna Drive is accessed from Nina Drive off Sand Creek Road and used to dead end in both directions. The subdivision road would connect both ends of Donna Drive and encircle a cul-de-sac called Raffaele Court.

The board granted a conservation subdivision, which allows more density on smaller lots than a traditional subdivision, and in turn allows more greenspace. Part of that agreement was to leave what is essentially a barrier of area around the perimeter of the site to buffer the existing homes on Alfred Drive East, Raffaele Court and those already existing on Donna Drive.

Instead, Magguilli said, Cillis Builders bulldozed what was supposed to be protected greenspace right up to the property line of those living along Alfred Drive East. He also ignored a directive to build a retaining wall and instead graded the land on one plot that backs up to a home on Raffaele Court to prepare for a swimming pool the homeowner wanted along with the house.

Susan Pellegrini, a paralegal working in the town attorney’s office, said grading right up to the neighbors’ property lines “defeats the whole purpose of the conservation subdivision.”

Magguilli said the town has issued stop work orders in the past but never before on a project of this size.

Generally, when developing a subdivision, homes will only be constructed as they are sold and there is a “for sale” sign on Sand Creek near a dirt road leading into the site. Currently there are three homes under construction, and the road completing Donna Drive is installed. There are excavators and other equipment sitting idle on the site.

The project will be back before the Planning Board on Tuesday, March 10 to address the issue of grading and the removal of trees and to determine what sort of fine, or remediation, Cillis will have to pay.

According to the narrative submitted to the Planning board, the Cillis was to plant 144 new trees but will instead plant 156, many of which are within the 15-foot conservation area that wraps the site’s perimeter. Also, the narrative states, the trees that were cut were diseased or damaged.”

In relation to the retaining wall, the builder states the land was graded on a slope of one-foot vertical per every three feet of horizontal therefore “maintained the conservation area, thereby eliminating the need for the retaining walls.”

“This conservation area revision, which adds the planting of 12 new trees, is in the spirit of the conservation subdivision guidelines and the protection of adjacent properties,” according to the narrative.

Ted Cillis, the proprietor of Cillis Builders, which bought the land and is building the homes, could not be reached for comment.