Guilderland to honor its hometown heroes

by Diego Cagara
in Community, News
0

Dozens of veterans and active military personnel have been honored with banners, like above, since the town of Guilderland and its chamber of commerce began the Hometown Heroes Banner Project three years ago. Guilderland Chamber of Commerce

GUILDERLAND — The deadline to sponsor a Hometown Hero Banner, an initiative by the town and Chamber of Commerce to honor veterans and active duty servicemen, is March 9.

In its third year now, the Hometown Heroes Banner Project honors any current or former Guilderland, Altamont, Berne, Knox or Westerlo resident who has served or is now in the U.S. Armed Forces or National Guard, or military veteran who was honorably discharged — the person can be living or deceased. 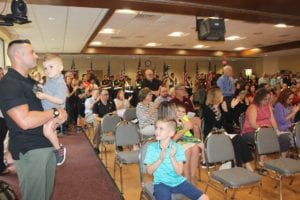 Banners each bearing the individual’s name, rank, photograph, area of service and years served will be unveiled across Guilderland, including Tawasentha Park and Town Hall.

Any interested individual, family, business or organization would pay $150 to sponsor a banner. If one does not know a local veteran or service person, the town and chamber can connect them with an eligible individual.

Danielle Walsh, the chamber’s executive director, said its former president, Michelle Viola-Straight, started the project three years ago because she was very passionate about veterans and military affairs, and she has two sons in the military.

Carol VanValkenburgh, the chamber’s membership associate, said members of her own family have served on duty, including her nephew who is an Army Ranger and her uncle who was in World War II. She said the project has since been a great collaboration with the town of Guilderland, appreciating how Town Supervisor Peter Barber was supportive since the beginning.

“We want to recognize the veterans and also their families and it’s been a commitment to defend our country,” Barber said. “Many people also served decades ago and it’s great that this project doesn’t just honor those living now. It’s been a collective period of service over time.”

In 2018, 29 banners were put up at Tawasentha Park and the public library’s parking lot on poles the town already owns; in 2019, 17 banners were displayed. Whenever banners were first unveiled, there was a ceremony in late spring or early summer that the honored veteran, their family and friends, and the public attended.

VanValkenburgh said banners typically are removed in October due to the incoming winter weather and are either returned to the respective families during a retirement ceremony or placed indoors like at Crossgates Mall.

She added, “I still think there’s people that should be honored that haven’t had a banner done for them so I think there’s a lot more veterans out there who deserve the recognition.” 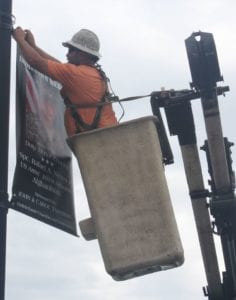 Walsh said seeing banners in town may cause people to recognize some of the honored individuals and think of others they know who have not been spotlighted yet.

For 2020, both women said they are hoping to have 29 banners up. “It’s been predominantly men in the banners so far but every year, we’ve had a few women and that’s good. One was a World War II Navy veteran,” VanValkenburgh said. Walsh noted that honoring more female veterans could be an opportunity this year and beyond.

Barber and Walsh said they may reach out to the town’s fire departments this year about whether they know anyone who has served on duty or possibly putting the banners beside their buildings.

When asked if the project has faced any challenges, VanValkenburgh said there have been times when families did not provide all the necessary information — like proof of their service during a war, their names and ranks — needed for the chamber to process before honoring the individual with a banner. She added that some families had to search for good photos of their loved ones, some of which are limited or only available at a small size that may not look optimal on a banner. “We like to get pictures of people in their military uniforms but that’s not always possible,” she said.

Walsh said it “would be a great problem for us to run into” if the chamber receives too many submissions from the public for banners to honor their loved ones, something that has not happened yet.

Looking ahead, Barber said that since the project has been successful since its first year, he does not see a reason to not have it continue for years to come. “It’s really important and it makes people aware of those around us who have defended our country,” he concluded. “We hope more people can take part.”

For more information or how to sponsor a banner by March 9, visit www.guilderlandchamber.com/guilderland/guilderland-hometown-hero, email at [email protected] or call the chamber at 518-456-6611.

Cheerleading is about more than pom poms

Cheerleading is about more than pom poms