Precautions taken after nitrogen leak at Pepsi plant in Colonie 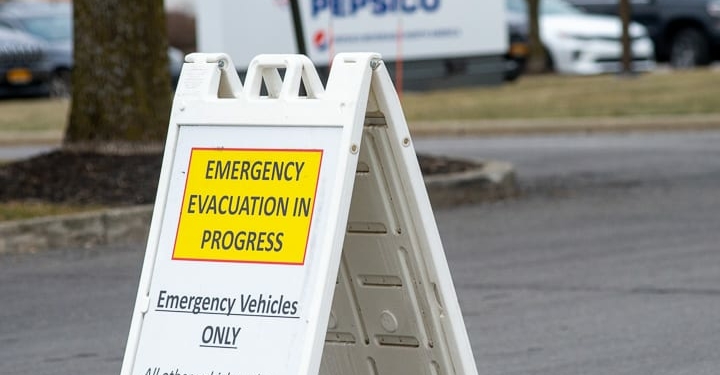 A sign at the East Gate of the Pepsi

COLONIE — As a precaution, officials were asking anyone working in the vicinity of the Pepsi Bottling Group plant on Old Niskayuna Road Extension to stay inside because of a nitrogen leak reported at around 8 a.m. on Friday, Jan. 31.

The leak came from a 200-gallon tank located outside the west side of the building, said Deputy Fire Coordinator Michael Romano. It formed a small cloud of gas that started drifting into the atmosphere but since there is no wind, was staying close to the ground.

The leak is outside and it poses no direct public health risk, he said.

“It would be a danger is if it leaked into a confined space where it would displace the oxygen from the area,” he said.

Some roads were closed in the area of the Albany International Airport near the intersection of Old Niskayuna Road Extension and Wade Road as a precaution, Romano said.

There were no injuries to workers or first responders.

Town officials were waiting for Pepsi personnel to come assess the leak and assist if necessary. It is not known if operations at the plant were shut down, or if employees were evacuated or just told to stay inside until the leak is contained.

It’s unclear what Pepsi does with liquid nitrogen, but a year ago the company announced it was developing Nirto Pepsi, a cola that uses nitrogen rather than carbon dioxide to create smaller bubbles and a smoother drink.