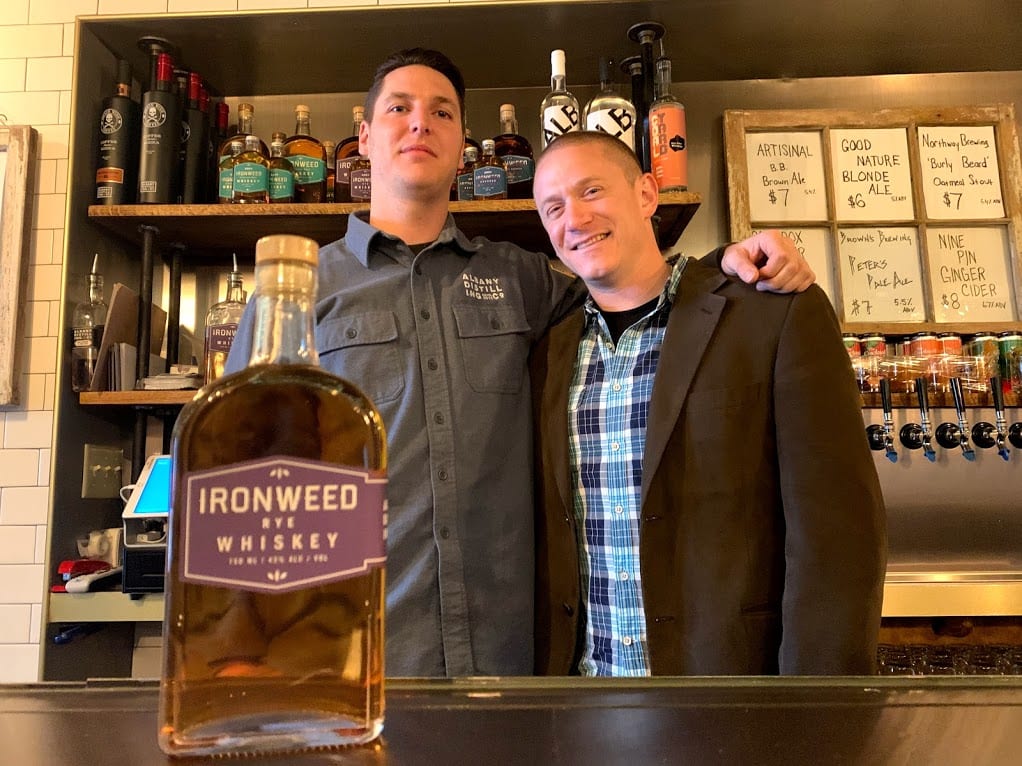 While trademarks are pending, its products — including Helderberg Rye Whiskey, Lemon Lime Kiln Vodka, Auld Lang Syne Whiskey and more — are still aging in barrels in the Albany Distilling Company so none have been sold or available on shelves yet. Sommer said he anticipates to start selling products in 2021 and continues to have a collaborative partnership with the ADC, which opened in 2012.

The business was born from an idea during Sommer and Carey’s summer after their high school senior year, ironically a time where neither was legally of age to drink yet. They had been sitting on Sommer’s parents’ hill in New Scotland which overlooked the Albany skyline.

“We both have this distinct memory 20 years ago where we decided to create a product from grain grown in New Scotland,” Sommer recalled. “But 15 years ago, we started realizing how feasible it was, in part of being inspired by the Albany Distilling Company.”

The issues began after Sommer and Carey had begun filing trademarks — like New Scotland Spirits and Auld Lang Syne — to the U.S. Patent and Trademark Office to use them in their products.

Sommer initially explained that New Scotland Spirits, as a name, pays tribute to his and Carey’s hometown, which, in turn, is related to immigrants coming from Scotland centuries ago. Meanwhile, Auld Lang Syne relates to a namesake Scottish poem and how it is popularly associated with New Year’s Eve, making it a marketing tactic to capitalize on during that time of year.

But the SWA apparently caught wind of this and sent a cease and desist letter in July 2018 to the co-owners, alleging that the products and trademarks they intend to sell can confuse consumers into thinking they are whiskey products from Scotland. It also alleged that words like “Scotch,” “Scots,” “Highland,” “Highlands” and “Auld Lang Syne” are associated with Scotland, which can cause further potential confusion.

Rosie Wilmot, a communications officer at the SWA, wrote in an email to The Spot 518 that a SWA spokesperson said, “The SWA has consistently taken action in our global markets to prevent the use of Scottish indications of origin on whisky which is not Scotch Whisky. This is vital to protecting Scotland’s national drink and is a deterrent to those who seek to take advantage of the quality reputation of Scotch Whisky and potentially mislead consumers.”

She continued, “We have objected New Scotland Spirits’ use of certain words and images that are suggestive of Scotland on their whisky products, and to their applications to register the trademarks ‘Auld Lang Syne’ and ‘New Scotland Spirits.’” She added that as trademark opposition proceedings are still ongoing, the SWA cannot comment further.

Sommer said he does not find the SWA’s reasoning as convincing enough. “The idea that someone could look at Auld Lang Syne, a brand of whiskey, and suggest, as [the SWA] has and immediately did, that the products we’re distilling here could be confused with Scotch Whisky from Scotland is ridiculous.” He brought up that not many people know Auld Lang Syne is originally a poem written in Scots from Scotland and people instead generally know the anglicized version of it.

Sommer also brought up that keeping the “New Scotland” name is important as it relates back to his hometown and its focus on being a local company. “If you think about the areas around here, names like New York, New England, New Amsterdam, even the town of Bethlehem, these are not regional signifiers that are devoid of their history,” he added. “They’re all names that signify their past locations. It’s the argument we’re making and I think it’s unfortunate they don’t even want us to use the name of our town.”

Since receiving the cease and desist letter, Sommer and Carey started trying to make compromises with the SWA. These include ensuring that their product designs clearly state they are from “New Scotland, New York;” spelling the word “whiskey” in American English with the letter “e,” unlike how it is spelled as “whisky” in British English; and updating its website to www.newscotlandspirits.us, with the “.us” to represent that it is an American business.

Richard Sicari, who co-owns the Albany Distilling Company and has been working closely with Sommer and Carey for years now, also expressed disappointment about how New Scotland Spirits has to face these legal issues.

“Customers will know that when they’re buying their products, they’re going to know that they’re buying a bottle from New Scotland, from upstate New York and customers would support the brand,” he said, referring back to how New Scotland Spirits products will also be clearly labeled as being bottled by the Albany Distilling Company.

However, Sommer and Carey’s compromise attempts seem to be in vain and the trademark battle and legal issues remain unresolved as of December 2019.

Looking ahead, it is uncertain how long the issues will continue for which raises the question of whether New Scotland Spirits can actually start selling its products in 2021 without worsening legal matters with the SWA.

“That’s a bridge we’ll cross when we get there but at this point, we’re not willing to give up the name, ‘New Scotland Spirits,’ because that’s what we are — we are spirits from New Scotland,” Sommer said.

Sicari chimed in, “Small companies like ours are proud of our hometowns and we’re really paying homage to them. I think if [the SWA] wants to go about it the right way, they could somehow partner with us and understand that we are not taking market share from them. In the grand scheme of things, people who buy our products do want to support something local.”

He added, “There should not be any confusion as to what [Sommer and Carey] are putting out and what scotch is.”

Sommer concluded, “This project is worth it to me because of how much I love the people and places where I grew up. We still want to honor our hometown, like this little corner on the planet, and we wanted to memorialize it in our labels so our neighbors can take pride in. I’d love to be able to have this upstate New York product that celebrates New Scotland with the broader world.”