A Christmas Eve fight at Crossgates doesn’t lead to arrests 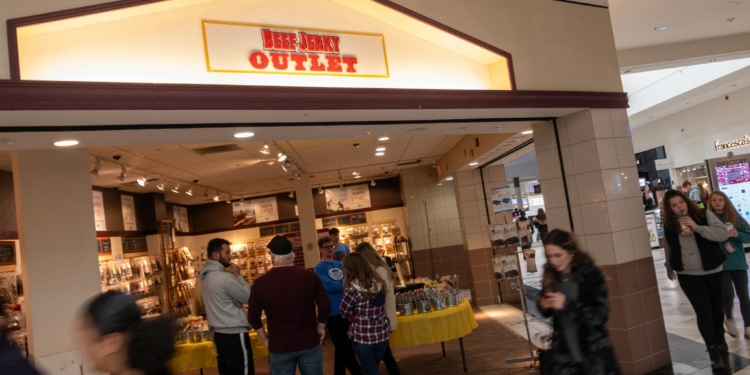 WESTMERE — No arrests have been made since a scrum of Christmas Eve brawlers left a Crossgates Mall store in shambles.

The Guilderland Police Department continues to investigate a fight that broke out inside the Beef Jerky Outlet store at Crossgates Mall. The crowd dissipated before the police department’s mall substation could respond in time.

A 24-second video of the fight was recorded on a bystander’s phone, and later posted to social media where it has since been viewed more than 3 million times as of this weekend.

The video appears to capture a fight between at least two people as it spills into the store. Nearly a dozen people surround the group as fists appear to be thrown. It’s not clear whether the group was trying to break up the fight or encourage it. Someone appears to be thrown against a wall display before another is tossed across a table. Store products were thrown in the air and splayed across the floor. The phone video appears to be taken from several yards away and fails to capture any discernible faces.

The store was reportedly closed for Christmas Day, but it was opened without evidence of the incident by the following morning.

Crossgates Mall has long been an attraction for high school teenagers and college students since it first opened in 1984. The Pyramid Company mall has evolved from a predominantly retail center to an entertainment destination over the years. The 1.7 million-square-foot mall features more than 200 stores and restaurants, an 18-screen IMAX Regal Cinema theater, a day spa, comedy club and various live entertainment venues. In years past, it was not uncommon for parents to drop their teenaged children to the mall to spend the day with friends.

The Christmas Eve brawl was reminiscent of incidents that led to Crossgates Mall instituting an escort policy in 2005. In that year, a brawl resulted in the arrest of eight people — two had to be restrained through the use of a Taser gun. Another incident involved the stabbing of a 25-year-old man in a reported gang-related dispute. In that time, the Guilderland Police Department established a substation inside the mall.

Since 2005, Crossgates Mall has enforced a parental escort policy that requires visitors under 18 years old to be accompanied by a parent or guardian starting at 4 p.m. on Fridays and Saturdays. The policy had garnered national headlines as more malls adopted similar policies to combat against unruly behavior.

According to the mall’s website, approximately 20 million people walk through its doors each year. Outside of petit larcenies reported each week, these are some of the more notable incidents captured by the Guilderland Police Department in its 2018 annual report.

In May 2018, a Diamond and Gold customer climbed over the counter and punched the store manager in the side of his head after he grew irate over a piece of jewelry he purchased that needed repair. The manager was taken to the hospital and diagnosed with a perforated ear drum. The suspect was later arrested, pled guilty in Guilderland Town Court and ordered to pay restitution to the victim.

In September 2018, two juvenile girls were stabbed near Original Cookie after an altercation over shoplifted property. The suspect attempted to grab property from the two juveniles before a fight broke out. The suspect pulled a knife and stabbed both juveniles, sending both to the hospital. The suspect later threatened the two girls over social media after learning they were reported to the police. Albany and Guilderland police took the suspect in custody, and the suspect was later sentenced to time in the Albany County jail.