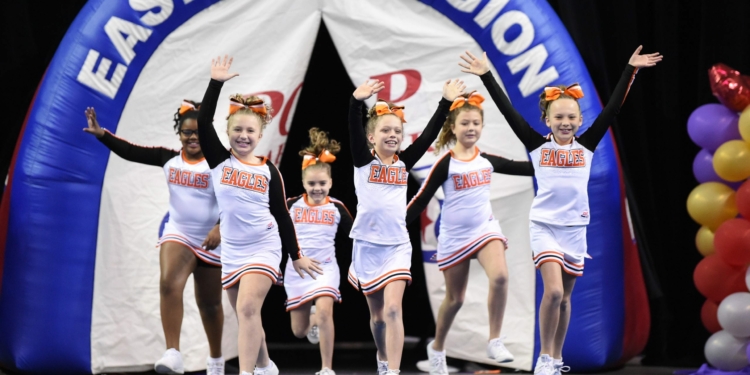 The Bethlehem Pop Warner Cheerleading team has its ticket to fly to Orlando, but it is currently raising money to fund the trip. Lindsey Bradt

BETHLEHEM — The Bethlehem Pop Warner Cheerleading team has qualified to compete at the ESPN Wide World of Sports at Disney World in Orlando, Florida on Friday, Dec. 13.

When they qualified to move up onto the upcoming ESPN Wide World of Sports, Lindsey said, “We were all in utter shock and excitement, and it’s quite the accomplishment because there’s only six girls on the team and this was their first year at the competitive level to do such a thing.”

Lauryn, 9, of Hamagrael Elementary, said the team will travel to and stay at Disney World from Wednesday, Dec. 11 to Saturday, Dec. 14. For the Dec. 13 competition, they will be up against 15 other teams from across the country. The 16-team group is a division in a larger competition. Overall, the event hosts 75 teams.

Gardy, 8, of Slingerlands Elementary, said she feels nervous and excited about the trip and competition. She, Lauryn and Martell — a 10-year-old Eagle Elementary student — all said this would be their first time going to Disney World, too.

While the trip is mainly focused on the competition, they expressed excitement about getting to explore attractions like Animal Kingdom, Toy Story Land and Main Street. But this opportunity was only possible after much hard work, practicing their cheerleading routine since August and raising funds on their own part.

Gardy said the team has been trying to raise funds for the trip since Nov. 9 which has included raffles, face painting, a coin drop, having a pasta dinner and doing a so-called cheer clinic where they taught other local children aged five through 16 how to cheer. Some of the members’ parents have set up GoFundMe pages too to aid the fundraising effort.

“Our goal was $11,000 and I think we’re getting close,” Lindsey said. “We’re around $7,800 now.” She added that the trip to Disney World has been paid upfront but the fundraising is to help reimburse the involved families for the costs of bringing the team and the co-coaches down to Orlando.

Besides all the fun they expect to have while at Disney World, the team still takes cheerleading seriously and wants to continue doing it for years to come.

“What I think is that the more you keep doing it, the more it makes you better,” Gardy said. Martell chimed in, “When you start cheerleading, it’s basically like making a whole new family.”

Lindsey concluded, “Most of these girls have been together for three or four years cheering and I would say something that keeps them going is the bonds that they have. In a group of six girls, they know each other, they feel comfortable with each other, they like to laugh, they like to have fun but when they’re competing and on the mat, they do an outstanding job.”

For more information and if anyone is interested in donating, visit www.bethlehempopwarner.com.

LETTER to the EDITOR: Double dipping is not right