Flavored tobacco ban does not get enough votes in Albany County 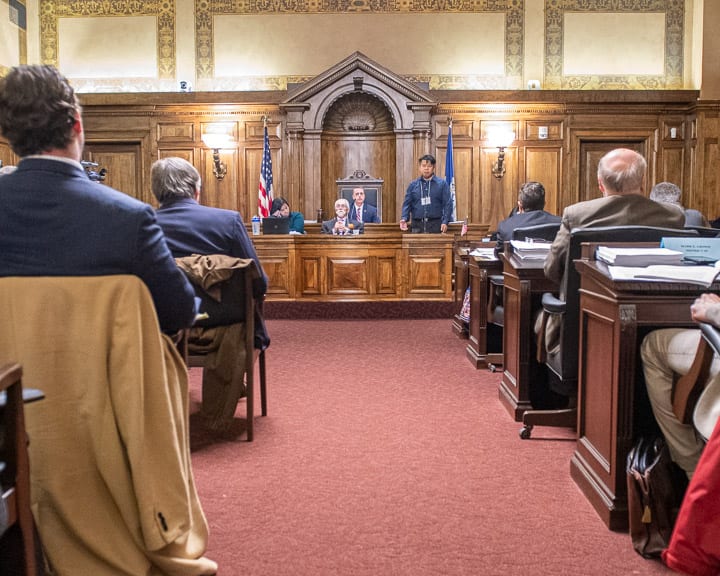 A man speaks against the ban of flavored tobacco at a meeting of the Albany County Legislature on Tuesday, Nov. 12 (Jim Franco/Spotlight News)

ALBANY — Flavored tobacco products can still be sold in the county.

The county Legislature voted 18-17 in favor of the ban, but that is two votes shy of the needed 20-vote majority.

“The Legislature agrees there is a health crisis regarding youth who use vaping products and something needs to be done to address that issue. However, members of the Legislature felt that there were too many provisions in Local Law E that were prohibitive and unclear,” said Chairman of the Legislature Andrew Joyce said. “Albany County does have laws already in place to reduce the exposure of youth to tobacco and vaping products. Perhaps the answer to the current crisis is to simply strengthen the laws we currently have and ensure they are being enforced.”

There was one abstention, and three legislators were absent from the 39-member body. A list of how each legislature voted is below.

“I am disappointed that this didn’t pass. Hopefully this will be reintroduced in the new year,” said Legislator Paul Miller (D-Albany,) a sponsor of Local Law E.

The vote was months in the works and dozens of people again crowded the Legislative chambers to speak for and against the ban. Themes of those against the ban included people who used vaping to quit smoking and shop owners who say the ban would put them out of business.

“I’ve been a smoker for 10 years and I recently quit smoking thanks to flavored vaping and I oppose Local Law E,” said one man.

“I own three vape shops in Albany County and I also have three kids so I know what you people are saying. But my kids know what they should and should not do,” said a shop owner. “If nothing else, think about the tax revenue Albany County will lose because people will just go to other counties.

Lawmakers, though, have also been targeting flavored e-liquid because of a sharp increase of underage people vaping and getting hooked on nicotine. According to the American Heart Association, in the past four years, there has been an increase of 160 percent in high schoolers who have used e-cigarettes.

“We are extremely disappointed that the Albany County Legislature chose to listen and follow Big Tobacco instead of the public health community, teachers, and youth themselves,” said Caitlin O’Brien, the American Heart Association’s government relations director for New York state. “With the defeat of this bill, our legislators have subjected our kids to continued nicotine addiction and myriad chronic health issues that follow.”

The vote came about two months after an executive order by Gov. Andrew Cuomo banned the sale of flavored e-liquid across the state. That order was challenged by the vaping industry and is currently on hold as per a court order.

One impetus behind the executive order was a recent spate of sickness and death initially attributed to vaping e-liquid. It was later determined the respiratory issues were because of Vitamin E Acetate, a type of oil used in cosmetics, which was added to illegal THC vaping cartridges and is not found in legally sold e-liquid products.

Local Law E would also have banned the sale of menthol cigarettes, a popular choice among minorities who smoke and which raised the ire of convenience store owners, who have waged an advertising campaign against the measure.

A can-paign with a message

LETTER to the EDITOR: The public has a right to know