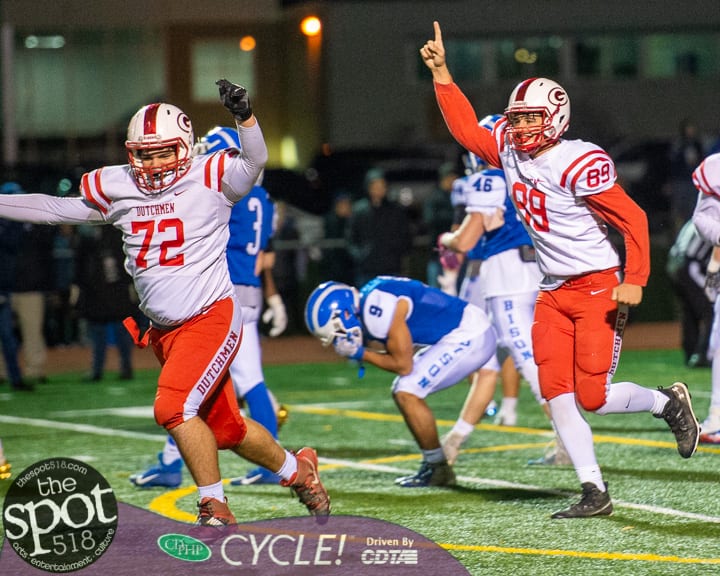 COLONIE — In one of the biggest upsets of the post season, Guilderland came to Shaker High School the No. 4 seed and knocked off the No. 1 seed Bison 14-7 in the Section II, Class AA semifinals on Friday, Nov. 1.

The Dutch will now take on Shen, who crushed CBA in the other semifinal game by a score of 41-0, in the Super Bowl on Friday, Nov. 8 at Troy.

The game Guilderland-Shaker game, which was dominated by a grind it out on the ground offense by both teams, ended in dramatic fashion.

Three plays later, it was fourth and four with just five yards to pull within an extra point of a tie.

Shaker’s Porter Ninstant took the pitch, plunged ahead and stretched his arm out to the goal line. But, the ball was spotted short of the one-yard line and, after a measurement, the game ended six inches shy of a first and goal for Shaker.

“That was the longest measurement I ever witnessed in my life,” said Guilderland Head Coach Dan Penna. “We had a situation where we had to defend against the run and the pass, and Shaker is a great running football team, and our kids stepped up.”

With about 30 seconds left, Guilderland took over on downs and ran out the clock.

Asked if he was surprised with the result Penna said:

“We had a great week in practice. I am so proud of the week these kids put in after the heartbreaking loss last week. Their ability level and their work ethic and their team work got them to this point. The outcome is certainly gratifying. It’s a great Shaker football team and a great Shaker program. We played fundamentally well, so I am not surprised.”

Shaker, which had a perfect 8-0 record, could not get its exceptional running game going against a stingy, swarming Guilderland defense.

When, in the third quarter, Ninstant did finally break a 20-yard-plus run, it was called back because of a holding penalty. Instead of first and 10 from about midfield and some much needed momentum, Shaker was looking at second and long from deep in their own territory.

After a scoreless first quarter, Shaker got on the board first with a short run by Joe Mirabile. Guilderland answered on a tipped, Michael Gitto pass that ended in the hands of Dylan Lee who got to the end zone untouched.

With about nine minutes left in the game, Guilderland running back Brad Igweike scored on a 25-yard run, one of the longest plays from scrimmage the entire night, and that turned out to be the game winner.

“Hats off to Guilderland,” said Shaker Coach Greg Sheeler, a class act in victory and defeat. “Coach Penna and his staff did a great job.”

“There Is No Good In Us”: Blackcat Elliot CD Preview