New road between Route 9 and Columbia Street opens in Colonie 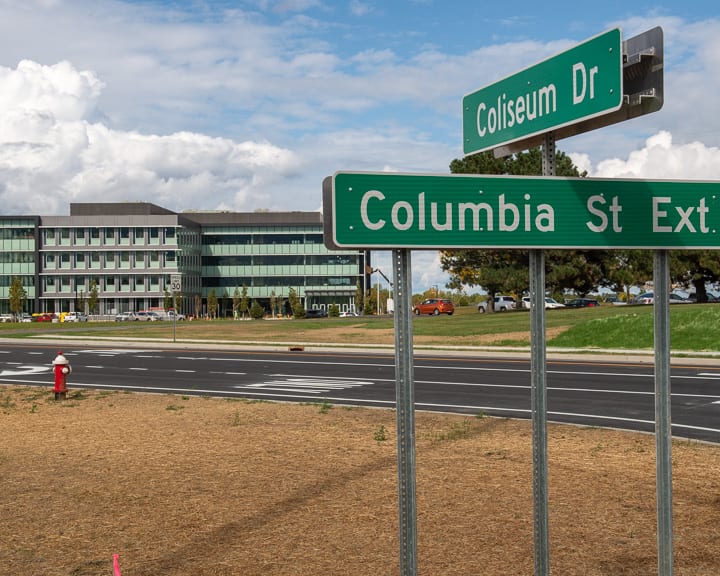 The road, called Coliseum Drive after the site’s first entertainment venue, was built by the Galesi Group through the old Starlite Theater site as part of construction of the new Ayco headquarters.

The project also realigned the Johnson Road/9R intersection so that Johnson Road now connects through to the new road.

“We are very excited about this new connector road,” said Supervisor Paula Mahan. “The Capital District Transportation Committee recommended this connector road as the best strategy for improving traffic flow in this sector, and it has been one of our long-term goals.”

Galesi initially applied for a $5 million grant from the state to build the road that bifurcates the site but was denied. The $6.5 million cost of the road was instead funded through mitigation fees that are assessed any project within the Boght Road-Columbia Street Generic Environmental Impact Statement area.

Based on a formula dictated by the GEIS, the town was responsible for paying $338,000 out of the general fund for the road, Galesi would have to pay $998,000 out of pocket. The balance would come from mitigation fees other developers have paid, and will pay in the future, to cover the impacts of their respective projects on transportation within the Boght Road GEIS.

There was some $2.8 million in the fund waiting to get spent on traffic improvements within the GEIS.

“This creates a connection between Johnson Road and Route 9 to help mitigate traffic adjacent to the former Starlite Theatre,” said David Buicko, president and CEO of the Galesi Group.

New traffic signals, streetlights and crosswalks on Johnson Road and Autopark Drive were also unveiled at a ribbon cutting for the new road on Tuesday, Sept. 24.