Big changes at the Race Course this season 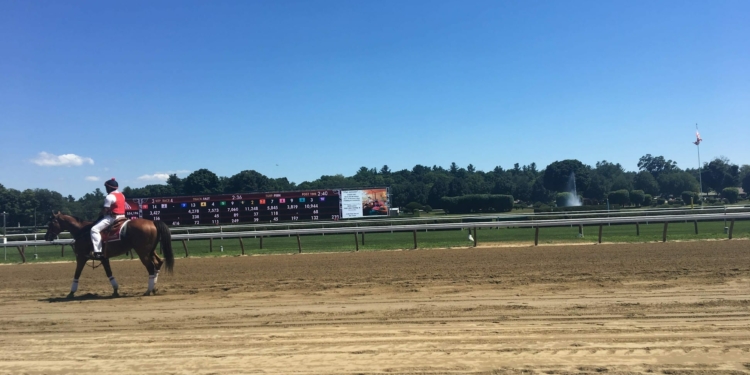 SARATOGA SPRINGS — Saratoga Race Course is experiencing many changes in the schedule this season. From cancellations, to an early start, to a saddening death and a 150 year celebration, the 2019 season is truly spinning the stakes.

On Saturday, July 20, the racing card was canceled due to an excessive heat forecast.

New York Racing Association, Inc.  CEO and President Dave O’Rourke announced the cancellation, saying that “assessing the safety of racing conditions, including weather, racing surfaces and raceday scrutiny, is of the utmost importance to NYRA and our industry partners.”

A release from NYRA informed the public of National Weather Service predictions of 105 to 110 degrees for Saturday. “This is a responsible and prudent decision that aligns with our New York Racetrack Heat Management Protocol designed to ensure safe racing for all participants,” stated New York State Gaming Commission (NYSGC) Equine Medical Director Dr. Scott E. Palmer.

This is not the first time that Saratoga’s schedule has changed this summer.

In a press release from February, NYRA announced “an adjustment for racing dates” for the 2019 season.

Due to construction at Belmont Park, the racing schedules were changed, moving the season for Saratoga to start earlier on Thursday, July 11 and end on Labor Day, Monday, Sept. 2. The earlier starting date will not change the number of racing days; since 2010 the precedent has been 40 days in the season.

Each week, there will be two dark days on Monday and Tuesday. Appelbaum commented “We will work with NYRA to ensure the safety of our horses and riders and to do all we can to protect the thousands of jobs in our backstretch community as we navigate this challenging time… While it presents certain complications, we all get to spend five extra days a year in Saratoga – which is always good for the soul.”

Speaking on the impact this will have for the community, Saratoga Springs Mayor Meg Kelly offered support for the initiative. “The City stands firmly ready to support NYRA in any way we can. We have no doubt that the new calendar has been thoughtfully planned and will be expertly executed… The new schedule will bring both anticipated and unanticipated benefits to our summer racing season, and we will use the City’s resources to make it even more successful than ever. I am looking forward to the 2019 meet – it’s going to be another great season.”

Despite the added day of rest for the horses, some advocates still do not think it is enough.

Patrick Battuello, the founder, president, and director of Horseracing Wrongs, is working “to end horse-racing in the United States.” Created in 2013, Horseracing Wrongs is “the only organization to put forth evidence” against horse racing, including kill lists and other reports that detail the deaths of horses. Saratoga recently had its sixth horse die and Battuello, along with supporters of his organization, will be demonstrating and protesting at many races this summer.

As for the earlier start date and added dark day per week, Battuello “doubt[s]” that it will positively affect the horses. He stated, “We argue that… it’s inevitable that they will die.”

Marylou Whitney, the horse breeder, philanthropist and Saratoga socialite died at age 93 on Friday, July 19. Her death was announced at the track on Friday, followed by a moment of silence.

“Marylou’s passion for racing was only matched by her love for the City of Saratoga Springs and her support for the backstretch community,” said NYRA President and CEO O’Rourke. “Her generosity was unparalleled and the list of her contributions is endless.” He continued, “Saratoga would not be the destination it is today without the esteemed leadership, dedication and support of Marylou.”

For horse racing, Whitney is most notably remembered for her horse Birdstone’s upset victory at the 2004 Belmont Stakes, as well as her many victories from horses bred at Marylou Whitney Stables. Additionally, the Whitney family founded Saratoga Performing Arts Center in 1966.

A patron of the arts, races and more, Whitney greatly impacted Saratoga Springs. She is a 2019 inductee of the National Museum of Racing and Hall of Fame.

On August 24, Saratoga will host its 150th Travers Stakes. First held in 1864, the race was named for William R. Travers, the old president of the Saratoga Racing Association. The winner of that first race was Mr. Travers’ horse, named Kentucky.

Today, the Travers Stakes is a prestigious race, with the competition featuring extraordinary three-year-old horses. This Midsummer Derby is sure to be a special one as it celebrates its 150th race.

REVIEW: RuPaul’s Drag Race All Stars entertain with messages of positive self-confidence, body image and more at the Palace Theatre