by Jim Franco
in Business, News
0 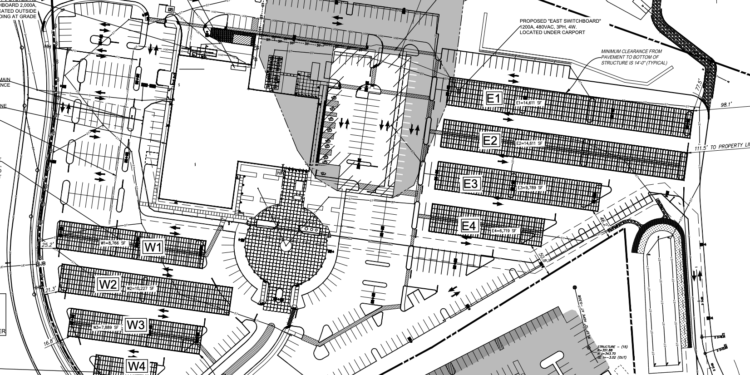 The site plan of Ayco with the solar canopies.

COLONIE —The developers of the new Ayco headquarters off Route 9 want to install about 3,000 solar panels on eight car ports to power the 150,000-square-foot building currently under construction.

Under the plan, the carport array will be split into eight individual sub-arrays, four on the southwest portion of the 837-car parking lot and another four on the eastern portion. All told, the plan calls for the installation of 3,010, 435-watt panels. The DC electricity will be converted by 10, 60-kilowatt string inverters installed along with the canopies.

In order to achieve enough square footage to accommodate the electrical needs of the building, according to the narrative submitted to the Planning Board, the developers will need 76,262-square-foot of space for the panels.

The carports will be at least 14 feet high to allow fire and other emergency vehicles access.

The carport canopies are being used more and more by large commercial developments across the country to not only help offset energy costs but, as an added bonus, provide a layer of protection from the elements, namely rain and snow, for those parking beneath.

On Thursday, July 18 a Galesi representative will go before the town’s Zoning Board of Appeals asking for permission to construct accessory structures on the front yard of the Ayco headquarters.

“There will be no impact on public or private utilities already constructed or proposed. This installation will not increase traffic or demand for services such as water or sewer,” according to the narrative submitted to the Planning Board. “Properties adjoining the front yard of this parcel or across Coliseum Drive are commercial properties. Properties in the neighborhood with a view of the portion of the site with carports in the front yard are all commercially occupied.”

The Planning Board took no immediate action since it was a sketch plan review, or a way for the developer to introduce the plan.

In July, 2018, the Planning Board gave Galesi the final OK to build the new Ayco headquarters at the former site of the Starlite theater, which was demolished in 1998. A $5 million road, called Coliseum Drive, would bifurcate the site between Route 9 and Route 9R and would, on paper, alleviate traffic congestion at the existing intersection of the two roads and the Northway ramp.

A day before the project was approved by the Planning Board, the town’s Industrial Development Agency approved a $12 million incentive package with the cornerstone being a 10-year Payment in Lieu of Taxes deal. In year one, the total taxes paid to the town, county and North Colonie School District would be $106,509, which would progressively grow until maxing out at $1 million in year 10.

The company would pay more than $6.5 million over the 10-year period including $4.8 million to the North Colonie School District, just more than $1 million to the county and $685,719 to the town. Without the project or the PILOT, the site as is would generate a total of $304,230, according to an economic impact study commissioned by the IDA.

Ayco is under the umbrella of Goldman Sachs, an iconic financial services company that’s been around since 1869. Ayco says the new headquarters in Colonie will allow it to retain 626 employees and allow it to hire 160 new people by 2021 in high-paying, financial sector jobs with another 476 indirect jobs – or jobs created with the ongoing existence of Ayco at the site.