Bethlehem’s historic season comes to an end in OT thriller 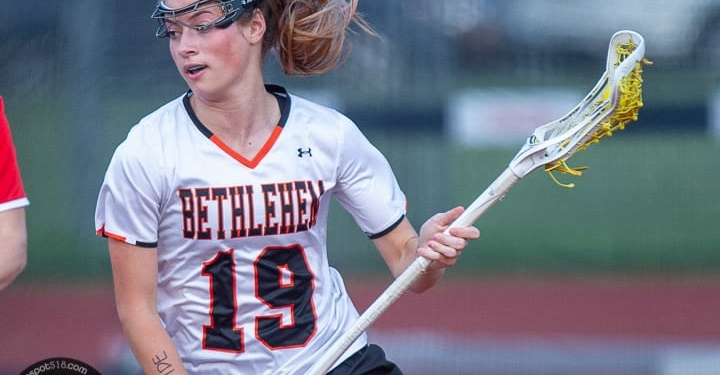 Lindsey Ayers in action against North Rockland in the state quarterfinals at Mohonasen High School on May 31. (Jim Franco/Spotlight News)

Already the Bethlehem girls lacrosse team had put together an historic season, but now it wanted to go where no Section II side had ventured before, all the way to a state Class A championship.

But the state’s top-ranked team, Baldwinsville, didn’t care much for the Eagles’ dreams, even when it erased a six-goal deficit to the Bees and led twice late in regulation of Friday’s state Class A semifinal.

It ultimately went to overtime, where Katie Pascale, a force throughout the game, claimed the all-important and, 48 seconds later, poured in the game-winner and B’ville edged Bethlehem 15-14.

Even this defeat, painful as it was, proved a special moment for Bethlehem, as head coach Dani Blachard recognized.

“I couldn’t be more proud,” said Blanchard. “We wanted to leave everything on the field, and we did everything we could. It wasn’t for a lack of effort.”

That it even proved so close was a tribute to the way Bethlehem responded to a rough start as B’ville roared out to an 8-2 lead, led largely by Pascale, who had three goals and three assists in that initial stretch.
“We had to get the initial nerves out,” said Blanchard. “But we woke up a little bit.”

It was more than a wake-up.

Shut out for more than nine minutes, Bethlehem broke that drought with Lauren Riker’s goal midway through the first half. Back-to-back goals, the latter of them a pretty behind-the back shot by Riker that found the net, pulled Bethlehem within 8-4 late in the half before Pascale and Emma Gebhardt scored 24 seconds apart.

But again the Eagles pushed back, Riker’s third goal following one by Avery Jones, and though it trailed 10-6 at halftime, it had not allowed the Bees’ initial surge to crush them, and that sustained belief would pay off after intermission.

Jones, Riker and Piper Gregory each found the net early in the second half, and when Avery Jones scored with 17:32 left, the Eagles tied it, 10-10. It went back and forth until Lindsey Ayres found the net with 8:47 to play and Ashlynn McGrath converted four minutes later,

Now it was the Eagles protecting a 13-11 lead, but B’ville was not done. Pascale scored with 1:52 left, and 38 seconds later Jenna Pastore poured in the goal that pulled the Bees even 13-13.

Caroline Wise claimed the draw, called a time-out, and surprised B’ville by having defender Sophie Glassman, who had only scored two goals all season, find the net with 45.9 seconds left. But Pascale beat Wise for the ensuing draw, and with 26.4 seconds to play, Emma States tied it again, 14-14.

With a chance to win it at the end of regulation, the Eagles turned it over, and it all hinged on the OT face-off where Pascale passed it to her teammate, Hannah Johnson. B’ville charged toward the net and the Eagles fouled Pascale, who used her free-position shot to put it past Sophia Koch.

Tough as this defeat was, Bethlethem returns six starters for 2020, and Blanchard said her team has every intention of returning to the state final four again.

“There’s more to come from this team,” she said. “We’ve got a young group, and we’ll be back.”

COLONIE LIBRARY: A universe of stories

Wren and Rail to move into Toll Gate in Slingerlands