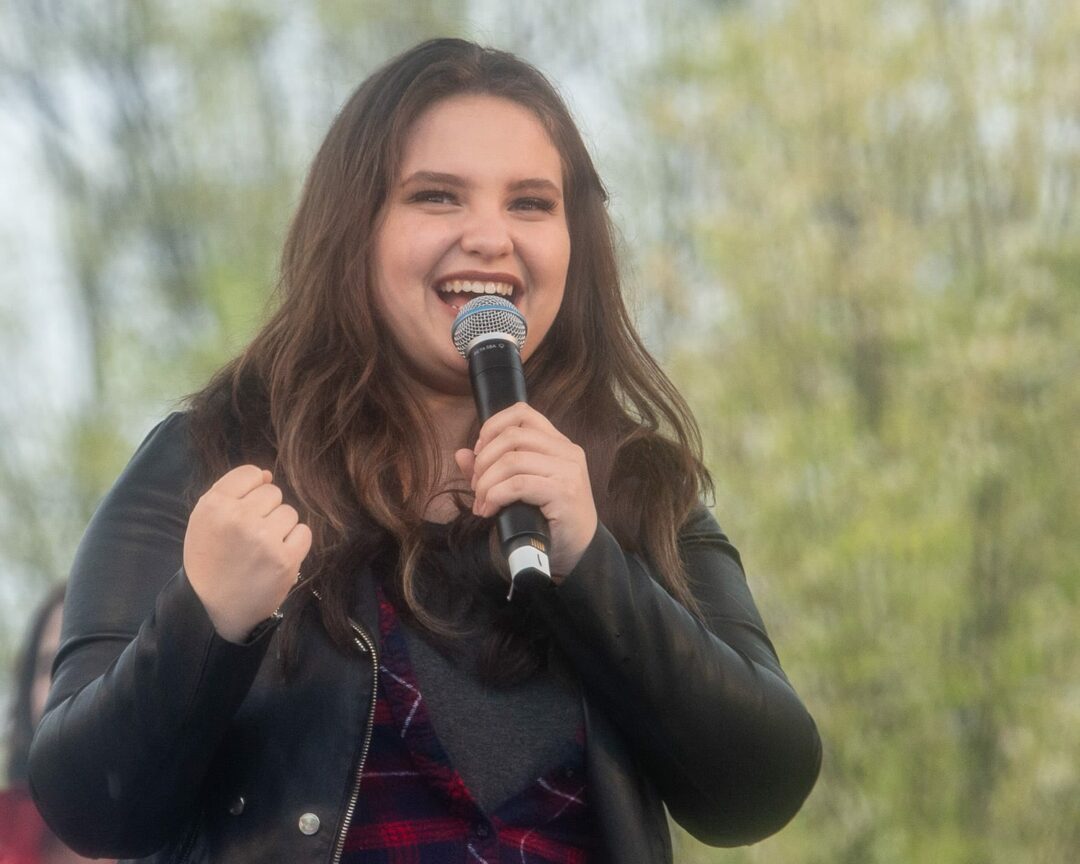 Early in the afternoon, the 17-year-old VanDenburg pulled up to Shaker high in a white stretch limo with an American Idol crew setting the stage and filming the “Hometown Heroes” segment of this Sunday’s show.

And later, on Tuesday, May 14, there was a parade through The Crossings where some 2,000 people braved the wet, damp day to hear her sing and give some moral support before she heads back to California to film the American Idol finale. And she gave back as much love as was given.

“I know some of you guys are musicians and singers, so if you are thinking about doing going for something as crazy as American Idol. Do it,” she said. “I auditioned in a bus stop in Buffalo, and now I’m in the top three and it’s been a dream come true.”

She was clearly enjoying herself, at times looking overwhelmed with the amount of support and other times just bursting into laughter or shouting out to friends and strangers alike. At all times, though, she seemed poised and confident — a unique mix she brings to the stage which compliments her powerful voice.

“I’m having so much fun,” she declared more than once while repeatedly thanking everyone for their support in voting her one of the top three on American Idol. “Really, I’m hyperventilating here … I’m just so excited. I’m so excited!”

And the crowd at both events responded with chants of “Maddie, Maddie, Maddie” and literally thousands of “We love you Maddie”(s) were heard throughout the day.

At Shaker, the chorus, where VanDenburg got her start, sang her a tune, and she returned the favor by performing “Fallin” by Alicia Keys for the student body that packed the gymnasium.

The Crossings was closed to traffic for the afternoon, and a parade, compete with a huge American Flag and fire trucks and a marching band, escorted VanDenburg through the winding paved path to the awaiting crowd.

There she was given a Key to the Town by Supervisor Paula Mahan, who declared May 14 “Madison VanDenburg Day” in Colonie. At Shaker, Mahan said she has not had as much fun in her dozen years as supervisor as she has had watching VanDenburg climb the American Idol ranks.

She played five songs at The Crossings and urged the audience to sing along: “Fallin,” “How Far I’ll Go” from the Disney movie “Moana,” “Already Gone” by Kelly Clarkson, “Piece of my Heart by Janis Joplin and “Speechless” by Dan and Shay.

At one point, she contacted her mom via cell phone and panned the crowd. “This is my mom everyone,” she said with a huge smile on her face.

At the urging of Master of Ceremonies Brian Austin, VanDenburg briefly told the crowd about her audition in Buffalo.

“I thought I really screwed that up,” she said. “And it ended up the opposite of that, and things kept rolling and here we are with all you beautiful people. I know you are super cold and it’s raining and I love you all.”

And the crowd, of all ages from all over the Capital District, loved her too.

“I like her because she is from Shaker and I’m going to Shaker and I love Shaker,” said Blue Creek first grader Caitlin Castracane, “Her voice is so enchanting and so magical and it’s just so cool.”

“It’s just crazy how it all started out with something so little and it turned out so big,” said McKenzie Zwack, a middle schooler from Amsterdam. “She is just so pretty and she has such a fantastic voice.”

While she is making a national name for herself, those closest to her say she is humbled by the experience and remains as well grounded as always.

“It is so cool to see her come home after seeing what she has done on American Idol. She has gone so far and she is going all the way and yet she is so sweet and kind and such a good person,” said Erin Curley, a 2017 Shaker grad and friend of VenDenburg’s.

“The school is just ecstatic. She is doing so well and we are all so proud of her,” said Julie Curley, a classmate who sang in the Shaker Chorus with VanDenburg. “It is so amazing to see her up there yet she is so down to earth. We are all just so proud of her.”

“We all knew she had talent but we had no idea she had this kind of talent,” said John Curley, who is in the same Shaker High social studies class as VanDenburg.

A lifelong friend who knows what it’s like to be on the national stage said it has been wonderful to watch.

“We’ve known each other since we were little kids, before we got into music and to see her now is just amazing,” said Moriah Formica, who two years ago made it to the quarterfinals on The Voice. “She is humble, she is amazing and she works to perfect her craft non-stop and always has. She is going to be a superstar.”

This Sunday, May 18, voters across the nation will chose between VanDenburg, Laine Hardy and Alejandro Aranda during the three-hour finale of American Idol. The show starts on the East Coast at 8 p.m., and it will feature live voting in the final round for the first time in its 17 seasons.

Spotlight on Finance: Check the cape at the door – An interview with Lee Woodruff