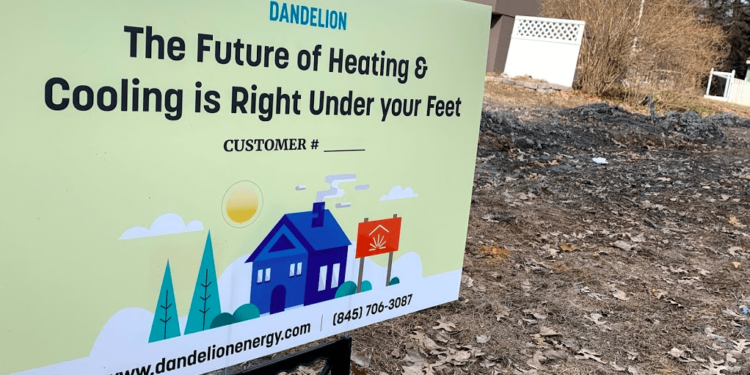 DELMAR — If you happen to be a neighbor of Delmar resident Matt Tangorre who lives on Huron Road, you have probably wondered why there had been ongoing construction work and a sign that reads “The Future of Heating and Cooling is Right Under Your Feet” on his lawn.

Tangorre is having a ground-source heat pump and underground pipes from Dandelion Energy installed which would provide geothermal heating and cooling for his residence. He saw this as a solution to how his furnace has already gone beyond its 20-year lifespan and how he never had an air-conditioning system.

Dandelion Energy, a company that was an offshoot from Google three years ago, has begun expanding its business of providing geothermal heating and cooling systems for residences across the Northeast region.

DE Senior Energy Consultant Nick Matthews explained that the geothermal cooling/heating system comprises of two main parts. First, there are underground pipes below the frostline where water is circulated in a closed loop to naturally absorb heat from the ground which is then pumped into the system’s second part — the heat pump. Heat is then extracted and then compressed and circulated throughout the home for the resident’s convenience. He said that this “is much more energy-efficient and it gets people away from using natural gas, oil and propane.”

Tangorre — who said he has a background in the hotel industry, housekeeping, facility maintenance and environmental initiatives — said he first became interested in becoming a DE customer after coming across an Instagram advertisement in early February. “From the hotel perspective, I was getting engrossed with learning how hotels are trying to lower their environmental impact, everything from putting solar panels to the roof, to finding less toxic cleaning chemicals and more,” he said. “So that’s kind of how I got interested in Dandelion Energy for my house, both from a personal and professional level.”

Saying that Dandelion Energy’s products are environmentally-friendly, Tangorre said it has a great return of investment since it requires little maintenance except for a quick filter change once or twice a year, and how its system is said to last over 20 years, more than the standard 15 to 20 years for a furnace. Matthews said it helps to remove the risk of carbon monoxide presence in a household and there will be a monitoring system which provides real-time data on how the heat pump and pipes are functioning.

While Matthews said the installation process can range from five days to two weeks, he said new customers need to be aware that parts of their lawn will have to be dug up first so that the underground pipes can be installed. “It’s going to be messy but Dandelion Energy has been very forthright with what you should expect,” he said. “There’s no disadvantage to all this except that there will be a brief disruption to your property. There will be actual drilling and entrenching. We would then put back the soil afterwards.”

He added that most homeowners are financing the system’s payments through 10 to 20 year-loans, “These have stable pricing so you know what exactly to pay as opposed to the fluctuating price that comes with natural gas, for example. Very few customers have bought the system in a lump sum.”

Speaking of customers, Tangorre said that his system’s installation process has literally attracted several curious onlookers’ attention who have begun asking about Dandelion Energy and geothermal heating/cooling. “The interest has been positive so far and I know for certain that one neighbor has approached the company about it,” he said. “And for me, I’m looking forward to having the system up and running, it’s gonna be fantastic.”

Tangorre also believed that New York residents could benefit from having a geothermal heating/cooling system installed in their residences. “I really think it makes a difference for people who’ve long used gas or propane. I think it will be beneficial for communities and it makes sense for the environment too,” he concluded. “Don’t hesitate when learning about all this technology. I mean, I enjoyed learning about all this but in the end, you’re just gonna go up to your thermostat and adjust for hot or cold. You don’t need to be mired in all the technical details.”

For more information like pricing and warranties, visit dandelionenergy.com.