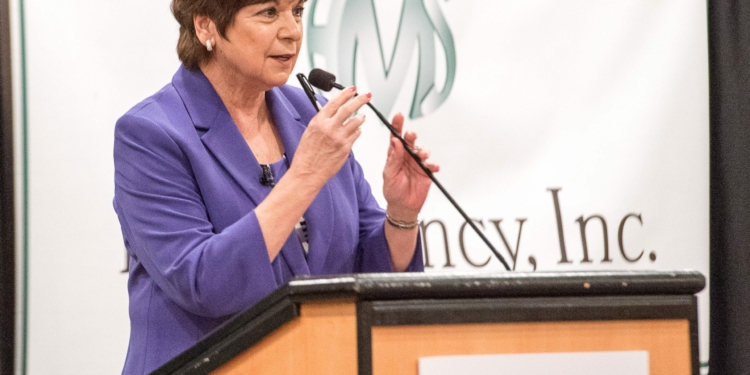 COLONIE — As expected, Supervisor Paula Mahan will seek a sixth, two-year term this November, according to an official announcement issued by the Democratic Party.

There are three Town Board seats open and joining Mahan on the Democratic Party ticket are incumbent Paul Rosano, Brian Austin and Jill Penn.

“Since becoming supervisor in 2008, I have always put forth my best efforts to stay true to my platform, open government, accountability, and fiscal responsibility,” Mahan said in a statement. “We have come a long way since 2008. The town is on the right track and it continues to move in a positive direction. I am proud of my accomplishments and I know there is more work to be done.”

She will run against George Scaringe, a former town and Albany County GOP chairman, who the Republicans endorsed last month.

Mahan can point to an A+ bond rating with a positive outlook, recently upgraded by S&P Global, being continually recognized as one of the safest towns in the country and investments made under her stewardship to storm water management system, drinking water and sanitary sewer systems, the library and all 12 pocket parks.

The third legislative seat became open when Town Board member Jennifer Whalen opted to run instead for the Albany County Legislature.

“I continue to be proud to serve the residents of Colonie, and look forward to adding to our Town’s impressive list of accomplishments,” said Rosano, who was elected in 2012. “Working closely in my role with our public safety divisions, the Town of Colonie continues to be one of the safest and most desirable communities to live in.”

The seats are staggered on the six-member panel and in addition to Whalen and Rosano’s the other open seat up for election this year is held by Republican Chris Carey, who is seeking another term.

Austin announced he is running again after narrowly getting beat two years ago.

“As a resident and educator for over 24 years in the Town of Colonie, I have had the privilege of getting to know so many great people,” said the current Planning Board member. “I believe communication is the key to a successful organization and will work my hardest to be available for every person in the town.”

“As an educator, I have dedicated my entire professional career to serving the children and families of the South Colonie Central School District,” said Penn, who is married to town Democratic Party Chairman George Penn. “In the classroom as a teacher and now in my role as a principal, I have worked to ensure the children for whom I am responsible received the best possible education in a safe and supportive learning environment.”

In addition to Carey, a retired Colonie police officer who took office in 2015, the other two Republican candidates are Rick Field, the owner of a real estate company whose father, Fred Field, served as town supervisor for 18 years; and Danielle Futia, the director of hospitality at Carondelet Hospitality Center, located in the St. Joseph’s Provincial House.

Petitions are already on the streets thanks to an accelerated election calendar that will move the primary from the traditional September to June. The General Election is still the first Tuesday followed by the first Monday in November except this year, the state will allow early voting at regional polling places nine days prior to Election Day.

Bethlehem CSD earns an A+