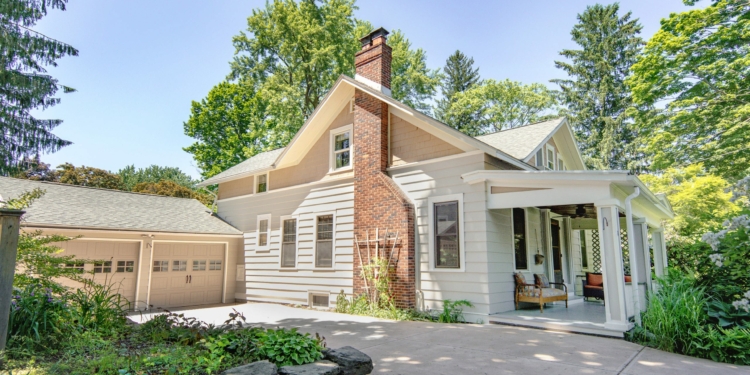 DELMAR — Judi Gabler looks over the website of a modular home manufacturer, admiring the modern fixtures featured in the picture.

“It’s crazy,” she said. “It looks like,” she said, catching herself before saying a house. As silly as it would have sounded, no one would doubt her ability to recognize the value of a home, let alone to identify one. Gabler Realty, LLC, of which she is broker-owner, negotiated approximately $58 million worth of real estate transactions last year. She was a top-selling realtor at one of the largest regional firms in the country before branching out on her own more than a year ago. Today, she sees the modular home as a way to sell land.

“It’s easier for us to sell vacant land if we can show people what they can put on it, and how affordable it can be,” she said. Another click of her mouse conjures a catalog of models ranging from one-story bungalows to two-story ranches. Each of the homes, regardless of the model, is built in sections, then shipped off and assembled.

The principal concept of ordering a house from a catalog

and having it delivered from miles away is not new. Sears, Roebuck and Company started something similar more than a century ago.

“It’s very much like a Sears Home,” said Gabler.

The Sears name was once synonymous with quality when it possessed a stronghold on consumer confidence with household goods. But, as more agile companies embraced e-commerce practices, Sears became less visible and less profitable.

Last year, Sears earned headlines when it filed for bankruptcy protection last October. Riddled with debt and pension obligations, the retail giant appeared to be heading in the same direction as other iconic storefronts that have closed over the years, most notably Montgomery Wards in 2001.

Like Wards, Sears was founded at the dawn of America’s consumer age of the late 19th century. The Chicago-based retailer developed a connection with people through its catalog, which included everything from sewing machines to automobiles. At more than 500 pages, the catalog ironically provided Americans a broad selection of items at a discount, challenging local store shops of the day. In 1908, the store included ready-to-assemble kit houses.

Sears offered kit houses in its popular catalog in 1908 to address suffering sales in its building materials department. So, instead of selling parts by themselves, the retailer offered a kit: all the pieces you would need to build a house. In that first year, 44 different models were features, with a price range between $360 and $2,890 (or $9,849.60 to $79,070.40 in 2019 U.S. dollars). Four years later, Sears started offering mortgages.

Pieces for each home would be delivered in boxcars. Depending on the model, there would be 10,000 to 30,000 pieces that addressed everything but the kitchen sink. Indoor plumbing, heating and electricity could be purchased at an additional cost. According to Rosemary Thornton, author of “The Houses That Sears Built,” Sears promised that, with the aid of a 75-page instruction manual, “a man of average abilities could assemble a Sears kit home in about 90 days.”

Sales of Sears Modern Homes peaked before the Great Depression. Sears jumped out of the mortgage business once it was forced to liquidate more than $11 million of defaulted loans in 1934. By 1940, kit homes no longer appeared in the Sears catalog. In all, more than 370 different models were offered, and more than 70,000 homes were built throughout the United States, predominantly in the Northeast. Coincidentally, Sears offered a five-bedroom, one-bathroom two-story model in 1924 named “The Delmar.”

“I know I have talked to folks who have said, ‘oh, yes. I have a Sears House.’” said Susan Leath, Bethlehem’s town historian. “They’re proud of it. It’s the concept of your house arriving [by train]. The whole thing, that you go in a catalog and fill out a form. I don’t know if a salesman came in, but I find the whole thing intriguing.”

Several houses across Olde Delmar have been identified as Sears Modern Homes. A “Concord” model resides on Adams Place. A “New Haven” model, with its distinguished front door archway, can be found on Hawthorne Avenue.

However, Thornton states on her website that many people who claim they own a Sears Modern Home may be misguided. Sears was not the only retailer to offer catalog ordered homes. Ward was just one of several other competitors who offered similar homes. There are a few features that distinguish a Sears Modern Home from others. You can look for unique column arrangements on the front porch or stamped numbers or shipping labels adhered to lumber. Grantor records at the local courthouse may reveal a Sears mortgage.

If a Sears Modern Home is listed for sale, Gabler said she will state it as such in the home’s description.

“I think it’s charming,” she said. “People tend to know that Sears-built houses were good quality. They had a history. It’s fun to be able to see the floor plan as it was ordered and the features they had selected. I think it’s nostalgic.”

DISCOVER DELMAR: The sleepy little hamlet has developed a nightlife of its own