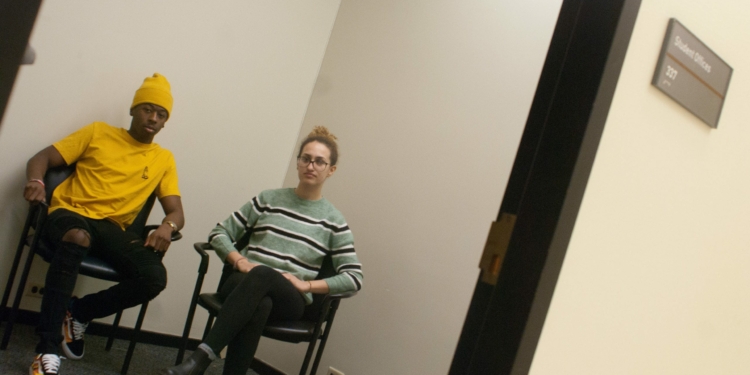 UAlbany’s Photo Services vice president Jarron Childs, left, and president Sabrina Flores, right, sit in the much smaller room the university offered for the club to move into. Both noted that the room could not fit half of their original studio’s equipment and they would lose their darkroom. Diego Cagara / Spotlight News

ALBANY — When University at Albany’s Photo Service president and senior student Sabrina Flores learned last month that her organization had to vacate its office, studio, and darkroom by Feb. 15, she was initially shocked at how sudden the notice came.

But that shock turned into determination.

The University Photo Service, which documents campus life for over five decades, has long kept its original office at Campus Center Room 305 since the organization was founded in the late 1960s. While it has become a longtime hub for photography enthusiasts, it also provided important resources for students through the years who used them for finishing projects, and practicing their camera and lighting skills.

It also used to regularly craft annual physical yearbooks called TORCH, a tradition that stopped in 2014 due to low demand and the rise of social media and the internet — there has been interest in starting a digital one.

“This is a place that’s stress-free where people can have fun, enhance your skills, and no one’s judging you, and everyone’s so supportive and helpful,” said Jarron Childs, a junior student and UPS’ vice president.

However, University at Albany’s Campus Center Management gave the notice for the organization to move to Campus Center Room 337 down the hall, which is much smaller and cannot house even half of the current photography studio’s equipment.

The UPS office would then house two new campus initiatives: Purple Threads and a university food pantry. The former is a new program that will house new or gently-used business attire which students can use for professional environments like internships or job interviews.

Jordan Carleo-Evangelist, University at Albany’s director of media and community relations, wrote in an email on Tuesday, Jan. 29 that CC Management was under the “understanding that [UPS’] darkroom has not been used for quite some time — at least several years, if not longer,” and that University at Albany is facing the challenge of balancing the “competing demands” over around 300 student organizations.

Flores and her colleagues immediately organized a social media outreach campaign to raise awareness of the issue, held an emergency meeting on Tuesday, Jan. 29 which even attracted some UPS original founders and past alumni, and started a petition which has drawn over 700 signatures so far — Flores said that it received 600 on its first night alone.

“If we were to move to that new small office, we would be losing our darkroom because we can’t even relocate it since it’s a physical structure of this room,” Flores explained. “Our current office can hold 40 to 50 people at a time, with people working on lighting, on all angles, being photographed subjects and so on. This room is such a perfect amount of space for everything we need to do.”

She added that the room has a rich history since it was the same exact room the club’s founders had used back in the 1960s, “I know that’s not a concrete reason for the university to necessarily care, but they should care because so many of our alumni, who were here 30 or 40 years ago, are angry when they heard about the move.”

As Flores reached out to such alumni, she described it as an “eye-opening experience” as she has learned that some have gone on to work for companies and publications such as the Washington Post, Facebook, Instagram, J.P. Morgan, New York Daily News and the New York Times. Speaking of history, Flores and Childs provided a personal tour of their office, flipping through old TORCH yearbooks, dating back to the 1960s.

Flores also presented the university’s 1920 yearbook — a fragile thin booklet with black-and-white photographs and sayings — which predates TORCH’s existence; when the University at Albany was called New York State College for Teachers at Albany.

She explained that UPS coincidentally received this yearbook in a mail package — from a Texan woman whose father, Louis Talwin Masson, was photographed in it, and who was noted as being the only Physics major graduate that year — on Friday, Jan. 25. “It was on the same day we met with Campus Management to discuss the moving issue. We thought that this is a sign,” she said. “We don’t get packages from anyone ever. It shows that people care, even by people from halfway around the country whose father graduated here almost 100 years ago.”

Flores and her team’s efforts seemed to have paid off though as CC Management relented and postponed moving the UPS office to the end of the current spring semester at the earliest.

Carleo-Evangelist wrote in a follow-up email on Wednesday, Jan. 30 that CC Management officials would meet with UPS members “to find out more about what they see as their darkroom needs moving forward.” He reiterated that the darkroom is still not regularly used by its members in recent years.

Flores, however, expressed relief, “Thank God the time crunch is gone. But that doesn’t still necessarily mean we’re safe after this semester since the club would eventually die out if we don’t get anything protected. We’re trying to be as loud as possible but we don’t know if they’ll hear us.”

She and Childs said they are working on a bill with the University Senate to guarantee UPS’ protection in the coming years, in case CC Management continues threatening to force it to move offices.

When asked if they had one message to the public and student body about UPS, Childs said, “In this room, we’re all one big happy family and we’re able to build off each other’s creative ideas and learn from one another. That’s why I really appreciate this room and why I keep coming back in since I was a wee little freshman. Here, we don’t want you to be the photographer people expect you to be, we want you to be the photographer you were meant to be.”

Likewise, Flores concluded, “Here, we are free to create what we want to do. This club has a legacy and we need the university to value that. And also, to value us.”