Have a heart and embrace red 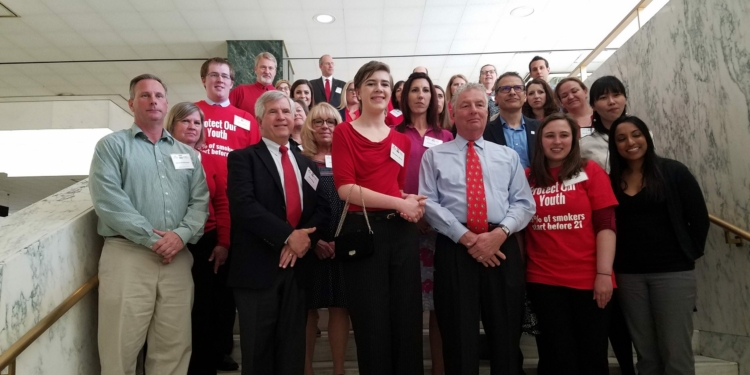 ALBANY — Red will be the color for February but it’s not just for Valentine’s Day though.

The American Heart Association is celebrating the 15th anniversary of its Go Red for Women campaign next month which aims to raise awareness of heart and cardiovascular disease among women, first being launched in 2004.

Two key events are planned to kickstart the campaign in late January and early February.

According to AHA, heart disease is the number one cause of death in women, estimated to kill one in three women every 80 seconds and claiming more lives than all forms of cancer combined.

Heart disease generally refers to when plaque builds up in the walls of the arteries which can make it more difficult for blood to flow through.

If blood flow is blocked by a blood clot, it can lead to a heart attack or stroke.

Inadequate nutrition, high blood pressure, and not being physically active are just some causes of heart disease.

Common symptoms include throbbing pain in the chest or arm, gastrointestinal distress, shoulder pain, back pain, fatigue, nausea and shortness of breath.

Kathleen Pingelski, a co-chair of the 2019 Go Red for Women campaign and president of computer training and consulting firm MicroKnowledge, said that heart disease has been generally perceived as pertaining to men, especially with the mindset that men are more prone to having heart attacks and high blood pressure.

“But raising awareness of the disease is important to women too so that people don’t forget that women can get it too,” she said. “The fact that it’s the number one cause of death in women is shocking and it can affect anyone like your friend, mother, grandmother, sister, aunt and so on.”

Pingelski added that heart disease runs in her own family and her father passed away from it at 62 years old, after having his first heart attack at 40.

Cindy Applebaum, fellow co-chair of the 2019 Go Red for Women campaign, and Albany Business Review president and market publisher, said that she once had a close friend since she was 10 years old who grew up with her.

But in 1990, her friend “dropped dead at 39 from heart disease. She looked like she was in good health then but she was actually suffering from it. One day, she got off her desk and went to use the restroom but she never came out,” she said. “That’s how quick it happened but the fact that she wasn’t aware of what was going on … Who knows if it would’ve saved her life if she knew earlier. It was such a shock and she also left behind three loving children.”

Applebaum said that she has worn something red, like a dress or handbag or even red tips on her fingernails, every day since preparations for the 2019 Go Red for Women campaign began in October 2018.

She explained that it’s a personal commitment to the cause and “it’s also a great conversation starter. I’ve noticed that when you wear red, people tend to really recognize the color.”

The aforementioned campaign as part of American Heart Month is set to commence on Thursday, Jan. 31 with Glow Red where many houses, buildings and businesses will be lit up in red across the Capital District, after lightbulbs are changed to emit a red light.

When asked exactly how many buildings are participating, neither woman could give a number because as of the week of Jan. 20, “many businesses are still signing up,” said Applebaum. “But it’s very encouraging all around because it shows how they stand in solidarity with the cause.”

Then, National Wear Red Day occurs on Friday, Feb. 1 where Capital District businesses are encouraged to invite their employees to donate $5 — the general public can donate however much they want too — to AHA while wearing red for the day.

All proceeds will benefit AHA’s Women Wear Red campaign. “The goal is for red to signify the movement for women, create awareness, let women advocate for themselves and to understand the risks of heart disease,” Applebaum said.

Besides these events, people are encouraged to not skip their annual physicals, speak to their doctor if they suspect or are experiencing heart disease symptoms, and seek resources like AHA’s BetterU program which is a 12-week program that discusses improving lifestyle choices like eating habits, being more physically active and learning more about the disease.

Pingelski added that “people should look out for signs or symptoms and know their risk factors, and then start making small changes in their lives to lower those risks. Don’t do a complete 180. Sometimes, it’s just choosing to take the stairs instead of the elevator, or drinking more water. Make those small changes and they can significantly help you in the long run.”

Both Pingelski and Applebaum believed that the overall Go Red movement has been growing through the years as 15 years ago, knowing about heart disease was not seen as a major issue.

The latter concluded, “We want to get heart disease off the top of the list that kills women. It can’t be taken lightly and I think the best thing that can happen is that this time next year, it’s not the number one killer of women. But it’ll take a lot of hard work, advocacy and messaging.”