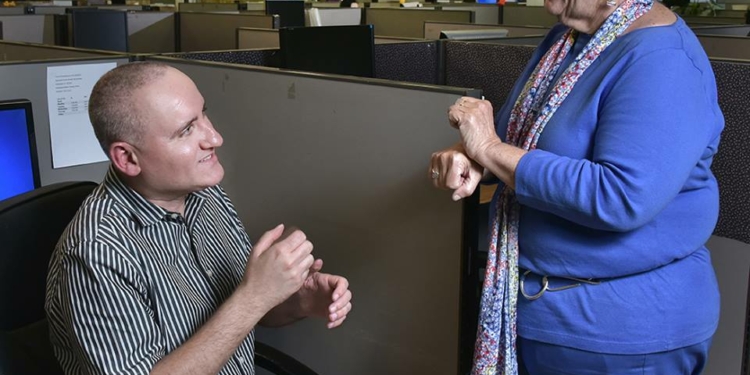 Tobi Bickweat, right, signs with an employee. More than half of eBizDocs employees are disabled. eBizDocs

MENANDS — There are two defining characteristics which distinguish eBizDocs’ business model; one was deliberate, while the other just worked out that way. That other factor has turned perceived impossibilities into opportunities for employees otherwise viewed as handicapped.

From the name alone, people can assume eBizDocs dabbles into the digital realm. The lowercase “e” prefixed upon the name is shared by other prominent tech businesses that emerged at the end of the 20th century.

The electronic content company opened for business in 1999, offering its clients the opportunity to embark on a paperless environment — freeing office space from document clutter and replacing filing cabinets with binary data now housed in cloud storage.

It’s a concept that continues to be viable. eBizDocs is a player among well-known companies that includes Adobe, CGI, Google, Microsoft and Oracle in the electronic document management service industry estimated to be worth more than $6 billion by 2024.

That growth is plausible when considering more than 80 percent of corporate data is still captured on paper. A reality that still exists more than two decades after the first EDMS companies emerged. That Includes vital records throughout New York state. Imagine all of the birth certificates signed and filed away. The task of digitizing those documents is just one of more than a dozen such projects shouldered upon Howard Gross’ staff.

“People have this vision, that when they come to our office, that they expect to see this folding table, six people and a copier machine at the end,” said Gross, president and CEO of eBizDocs. But, there’s a process in preparing the documents — pulling staples, removing paper clips, flattening down folded edges — that calls for more sophistication. “There’s boxes of clips. That was the only way to quantify the work that is done here.”

eBizDocs has received numerous honors and awards, which, paired with satisfied customers, solidifies our status as a dependable leader in the content

management industry. It serves both the private and public sector and is a preferred source contractor for New York state entities. That last distinction wasn’t necessarily planned.

The Preferred Source Program was established under state finance law to address employment reform affecting people with disabilities. The program establishes social and economic goals. Under this law, when certain commodity or service offerings meet the purchasing needs of a state or local government agency, public benefit corporation and some public authorities, those purchases must be made through the Preferred Source Program. NYSID is a facilitating agency of the program.

Last October, NYSID recognized eBizDocs as its Corporate Partner of the Year, citing its inclusive business culture that pairs workers, whether with hearing impairments, physical and mental health challenges, with the right job.

Gross employs 42 people at his Menands office space. More than half — 62 percent — possess a defined disability. That figure contrasts against employment figures where people with defined disabilities are under employed. According to Maureen O’Brien, NYSID president and CEO, the unemployment rate stands at 67 percent. That figure could be derived from a misconceived general lack of trust in quality or reliability.

“And, that was in the early days, so there was an assumption to that,” said O’Brien, adding that the partnerships forged through the program has helped develop change. “That message has changed entirely. I think what you hear now, it’s less talk of disabilities and more talk of abilities.”

Gross recalls reaching out to the Center for Disability Services as he struggled to find employees to scan documents.

“We had temps who were coming in and leaving on lunch breaks,” said Gross. “And, leaving forever. When we hired folks from the center, there was never an issue. They showed up everyday. They did the work.”

When confronted with the stereotype that someone with a disability is unreliable, Gross flips it over from his own experience. Many of his employees depend on public transportation, requiring the need to memorize schedules. Instead of a simple 20-minute drive from your own doorstep to work, his employee has to factor in an hour’s ride on the bus before getting into work at the same time.

The workflow on the floor is no different than that of any other document station. Employees receive competitive wages at about $12 an hour. The one exception would be Tobi Bickweat, eBizDocs production manager. By profession, she is a vocation rehabilitation counselor with a 30-plus-year background in working with individuals with disabilities. Gross calls her the coach he wished he could have day to day for himself.

“I am Howard’s coach,” she said. Bickweat was hired two years ago and now wears many hats. She helps the entire staff with human resource issues and training that could include teaching staff members how to use sign language to speak with a deaf co-worker. Instead of allowing a handicap exclude someone from the rest of the office life, Bickweat uses such programs to help develop bonds.

“I keep coming back because of Howard and because I love what I do,” she said.

eBizDocs will celebrate its 20th year in 2019, and in doing so, it has stumbled into the role of champion for the disabled.

“It was never designed other than a good business model,” said Gross. “It was never meant to solve the world’s problems. It was about, I have a business need [and] I need to solve it.”

Bethlehem Town Board to-do’s for 2019 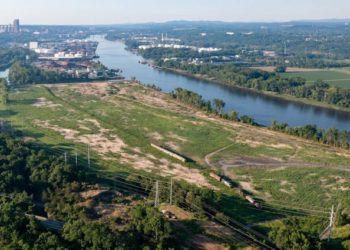