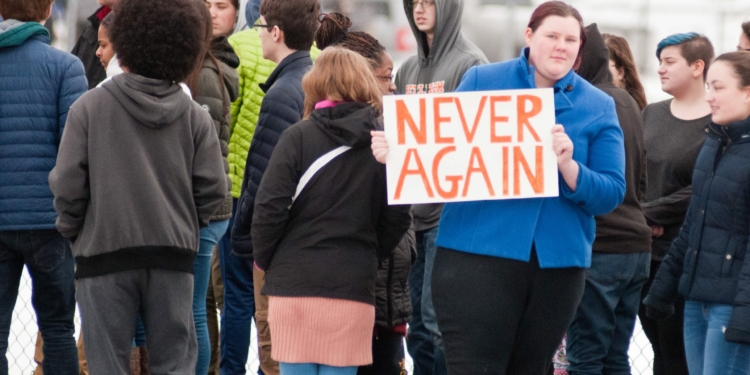 he nation’s youth stepped up and voiced out against rising concerns over gun violence in school. Here, one Bethlehem Central High School student was joined by more than 100 of her classmates as they joined a nationwide walk out on March 14. Michael Hallisey / Spotlight News

The year 2018 could be described as a year of activism, community involvement and answers. The shooting that left 17 people dead in Parkland, Florida, and injured 17 more, saw the country rise up in response with an outpouring of rallies, politics and support. Our community participated as well. Our local sports team made it to Class AA championships in soccer. A local war hero who was killed in action finally made his journey home. Indian Ladder Trail saw many hikers and battled to stay open after unfortunate injuries and deaths. Selkirk Fire District is wondering what to do after a $17.8M proposed plan was voted down by residents.

DELMAR — Air Force Capt. Richard Kibbey was declared Missing in Action in February 1967 after the helicopter he was co-piloting, a Sikorsky HH3E “Jolly Green Giant,” was shot down in North Vietnam. The helicopter was targeted in the Mu Gia Pass, one of two arteries of the Ho Chi Minh Trail. This was Kibbey’s, the eldest of four brothers, first mission in this particular helicopter, his son, Richard Kibbey Jr, said. In 1978, Kibbey’s status was changed from MIA to Killed in Action, or KIA.

The Kibbey family heard nothing for 51 years about the fate of their loved one. While they would occasionally receive some communication from the U.S. government, the letters or phone calls would neither disclose Kibbey’s fate, nor the location of his remains. The answer finally came in August: Kibbey’s remains had been found, and he was coming home.

“I’m sort of mixed [with] feelings,” said Roger Kibbey, Richard’s brother, less than three days after learning of the news from his nephew, Richard Jr. He recalled how his big brother Richard was able to “pull a few strings” to give Roger time off and visit him in Utah before being shipped to Southeast Asia. Otherwise, most of the interaction he remembers having with his big brother took place through “hit or miss” encounters while the two were in service. “There were situations where I ran into him in California pulling war games,” said Roger. “When I was in Okinawa, he would fly into Okinawa. And, when I was in Vietnam, he would fly into Vietnam. Just a hit or miss, seeing him. But, I’ve worn his bracelet ever since.”  The silver bracelet Roger Kibbey wears bears his brother’s name.

Kibbey’s remains were positively identified in early December. He will be buried on March 29 in Arlington National Cemetery during a formal ceremony, according to an article published by the Albany Times Union on Dec. 17. Kibbey was promoted to Major after the accident, and Colonel after he was designated KIA.

NEW SCOTLAND — Indian Ladder Trail was in jeopardy of never opening again in early May. The trail, which usually opens during Memorial Day weekend, was being examined for the danger it poses to hikers (after a woman was seriously injured by falling rock). The two-mile footpath was etched into limestone and other erosive material by glaciers. As the path aged and weathered, several injuries and incidents tarnished the reputation of the family summer destination.

The trail finally reopened, only to be quickly closed again when a hiker found human remains on June 9. The remains were believed to be those of Guilderland

native Bruce Decker after a wallet bearing his identification was found on the body. Decker had been missing in the park for some time; his white sedan was found parked near the Paint Mine hiking trails in February. Local authorities searched the area for Decker from Feb. 22 to March 2, but suspended the search after a Nor’easter dumped two feet of snow on the trail. Six state agencies — including 40 members of the Department of Correctional and Community Services Emergency Response Team, Albany County Sheriff’s Department, eight Albany County fire departments and 12 volunteer search and rescue teams — contributed 4,487 hours to the search.

The trail was reopened the next day after all remains were cleared.

SELKIRK — The fire district’s proposed $17.8M district project was presented to residents via a bond vote in November. The plan, designed by Mitchell Associates Architects, included the construction of a brand-new, 34,091 square-foot headquarters on district-purchased land along U.S. Route 9W beside the Albertus W. Becker Elementary School; the demolition and reconstruction of the district’s second station at 301 Glenmont Road in Glenmont that would have taken up 10,224 square feet, and the rehabilitation of its third station at 480 Bridge St. in South Bethlehem. If passed, the updates would have secured safer structures for volunteers. The plan would have cost each district resident $75 per year, over a 25-year period.

Public meetings were held at two Selkirk sub-stations, one on Tuesday, Nov. 27, the other on Thursday, Nov. 29, to provide voters with in-depth information about the project. The fire district perceived this project to be more efficient in the long term than building a new, fourth fire station since modern firefighting equipment has advanced since its early days and the type of band-aid repairs that have been keeping stations afloat is no longer good enough. The original stations were built in 1928, 1952 and 1956, respectively.

Voters shot down the project on Tuesday, Dec. 11, 557-336. “We are disappointed that the public rejected the bond proposal for the fire station renovations,” Charles Wickham, the district’s Chair of the Board of Fire Commissioners, said in a press release after the vote. “The Board and the Building Committee will look at these results and make a decision about our next steps.”

BC girls soccer road to glory

The Bethlehem High School girls’ soccer team beat No. 2 seed Shenendehowa at Stillwater High School on Oct. 29 with a score of 2-1. Coach Tom Rogan credited his team as one of the most hardworking groups he has ever had, praising their work ethic and the wide versatility of the girls’ skills.

Bethlehem’s Piper Gregory got the winning goal with 3:25 left on the clock. Team captain Grace Hotaling scored the first goal.

The girls played Section III champs Fayetteville-Manlius in the state regionals on Saturday, Nov. 3, at Ray Bodley High School in Fulton. The Eagles won 2-0. The girls made it all the way to state championships, where they lost against Monroe-Woodbury 1-0. This was the first time in program history the girls made it to state championships, Rogan said.

Students took the time immediately after the Parkland incident to stage a walk-out in March. Hundreds of Bethlehem students walked out, days before the well-attended Albany March For Our Lives anti-violence rally. Several Parkland students spoke at the rally, and Bethlehem student Lydia Martell was one of the organizers for Albany.

Local school districts implemented strategies to combat violence. Ravena-Coeymans-Selkirk is just one of the districts participating in the Albany County Sheriff’s Office PAPERS program, an acronym for Police And Pupils Enforcing Safety. Voorheesville and Berne-Knox-Westerlo are also participating. PAPERS is designed to put the schools in direct contact with Albany County 911 dispatchers. The schools were outfitted with 19 “panic buttons.” Also, 20 two-way radios and mobile radios were outfitted on 114 school buses.

Nine days after Parkland, a Bethlehem Middle School student was arrested for allegedly making threats of school violence. The 14-year-old student, whose name was not released due to their status as a minor, was charged with one felony count of making a terroristic threat and one misdemeanor count of endangering the welfare of a child. The youth was transported to Albany County Family Court.

Last month, four Ravena-Coeymans-Selkirk students, whose ages range from 10 to 15, were arrested and suspended indefinitely after two videos were uploaded to social media allegedly depicting a school shooting. The students involved also allegedly made racial slurs throughout the video. While the video showed no identifiable connections to the school district, Superintendent Brian Bailey said the video was enough to require a full investigation. Bailey received word of the videos from a peer of the charged students and immediately forwarded it to police.

“This should be a lesson learned to anybody out there who is thinking of doing something so stupid,” Albany County Sheriff Craig Apple said to local ABC affiliate News10 WTEN.

Auld Lang Syne: A look at the top 2018 stories in Colonie