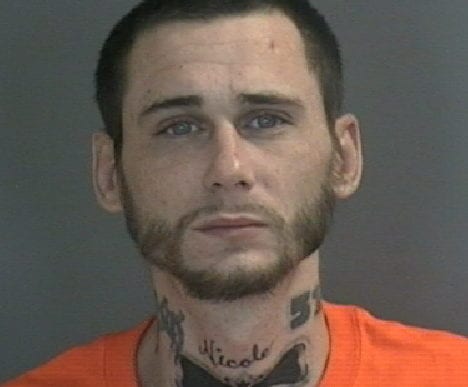 COLONIE — A Cohoes man was arrested after leading police on a wild high speed chase, driving in the wrong direction on two major highways and eventually climbing a tree before surrendering.

According to Lt. Robert Winn, police were called to the Monte Mario Motel on Route 9 about a man using counterfeit money on Friday, Dec. 21.

When they pulled into the lot, Law allegedly broke the law and intentionally drove into one patrol car and then drove at, but didn’t hit, a second patrol car. The officer in the car was not injured and the car had only minor damage.

Law, though, took off heading westbound in the eastbound lane of Alternate Route 7, forcing several cars off the road including a responding patrol car, Winn said.

He then got on the Northway heading south in the northbound lane until Exit 6, where he got in the correct lane. He sped south and exited onto Central Avenue at a high rate of speed.

At that time, officers thought it too dangerous to follow and called off the pursuit. A few hours later they tracked him to Cohoes, and K9 units found him hiding under a shed.

He fled on foot, and briefly into the Mohawk River, before climbing a tree, Winn said, and finally surrendered at around 4:25 a.m. on Saturday, Dec. 22.

The car he was driving was determined to be taken by him without he owner’s permission.

According to the arrest report, Law is charged with the felonies of reckless endangerment in the first degree and criminal mischief and the misdemeanors of reckless endangerment in the second degree, unlawfully fleeing a police officer, unauthorized use of a vehicle, reckless driving and driving with a suspended license. He was also ticketed for operating a motor vehicle without a license, failing to obey a traffic signal and speeding.

He was taken to the Albany County jail pending arraignment.

With state grant, Lansing’s Farm will remain a farm