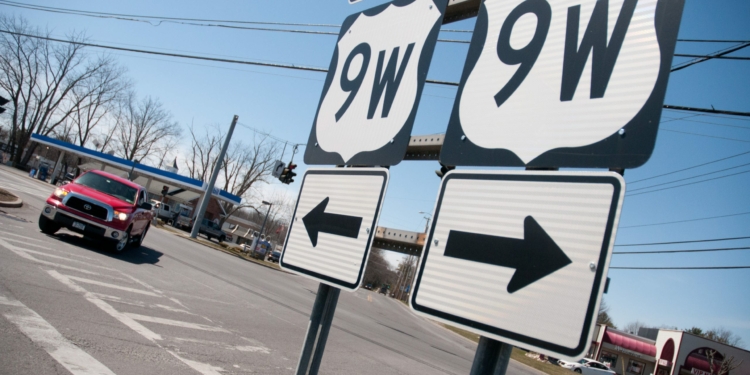 A roundabout is planned to replace the four-way intersection that currently connects U.S. Route 9W with Feura Bush and Glenmont roads by 2021 at the latest, in hopes of making it safer for vehicular and pedestrian traffic alike. That intersection has long been viewed as dangerous and the location of many right-angle and left-turn head-on crashes.

According to Robert Leslie, the town’s director of economic development and planning, that intersection was initially identified during the Route 9W Core study that was completed back in 2010 which recognized that growth was occurring in that part of Glenmont. He said that as development rises there, so would traffic and usage of that intersection, resulting in more traffic delays.

This resulted in the development of the Glenmont roundabout project, which was unanimously approved by the Bethlehem Town Board in early May, whose members believed that it would help direct traffic and pedestrians in a much safer manner.

The project not only includes constructing a roundabout, but also installing crosswalks, rectangular rapid-flashing beacons, and either establishing or improving 2,800 feet of sidewalk. The latter includes the construction of two new stretches of sidewalk; one along Route 9W from the roundabout to Glenmont Elementary School, and another from Route 9W to Vagele Lane.

“Doing nothing is not going to make our lives easier. This is not a situation where we can leave the intersection as it is and everything is going to be fine,” said Bethlehem Town Supervisor David VanLuven. “It’s an important project because our town is growing and evolving, and we need to do it in a careful and intelligent way.”

Eighty percent of this roughly $4.9 million project, or $3.9 million, is funded through a grant by the Transportation Alternatives Program, and Congestion Mitigation and Air Quality Improvement Program (TAP-CMAQ) of the state DOT, said Leslie. The remaining 20 percent or $975,000 would be paid by the town.

Steps to be taken

Leslie said that construction is anticipated to begin in spring 2020 and could last a full year. In 2021, construction would resume after the winter months to complete landscaping and installing both light poles and other decorative enhancements.

For now, “We’re scheduling a meeting with adjacent property owners to meet with them, and speak on the project, and maybe looking to purchase land from them,” explained Leslie. “We’re also anticipating a meeting with the DOT in the next few weeks to discuss the project’s design plans which have to be approved by them.”

While a public meeting is being planned for early January 2019, Leslie warned that there is no set date yet. “It’s to be held at Glenmont Elementary School and we’re looking to hold it in the week of January 14.”

The school was also the site of the very first public meeting and workshop back on June 26 of this year where people could learn more about the project and ask questions. “It was a great turnout—close to 100 people attended—and we went through the issues that they had,” recalled Leslie. “We received feedback from the public who wanted the roundabout to address the congestion there and they were concerned about public pedestrian safety too.”

VanLuven pointed out that the two top things he took away from that meeting were that many people were enthusiastic and supportive of this project, and that they really want the intersection to be safer for pedestrians.

Senior Project Manager Stephan W. Godlewski of Creighton Manning, the Albany-based surveying and engineering firm working on this project, said that such meetings are an example of how “we do our best to proactively communicate with residents and businesses to keep them well informed.”

He addressed a common concern about whether businesses and residents will be negatively affected during the construction timeframe. “We try and communicate to them when the major disruptions are going to be and the time when there’s less traffic, which is typically in summer when everyone’s on vacation,” he said. “That way, they can update their patrons so they, in turn, can understand and maybe adjust their schedules.”

He added that Creighton Manning is now in the process of meeting with various local businesses there.

VanLuven also highlighted the importance of maintaining communication in that regard. “We want to make sure the changes will be beneficial to the businesses and not make already challenging things worse. During construction, there’ll probably be traffic detours and lane flaggers.”

He said that businesses there will still remain open and people need to go shop there. “A fast way to lose a business is when people start shopping online instead of getting out there, despite the construction. You like a local store or restaurant that you want to see stay there? Go and shop and eat there. Residents need to step up and support those businesses.”

Both Leslie and Godlewski confirmed that the project’s design has not yet been finalized.

The latter said that Creighton Manning is planning to produce and present a document at that meeting that reviews the intersection’s past crashes and identifies any possible patterns that occurred over a certain time period.

For now, Leslie said that residents who are interested in attending the next public meeting should keep an eye on the town’s website.