DISCOVER GLENMONT: An old debate in baseball has familial ties to the area 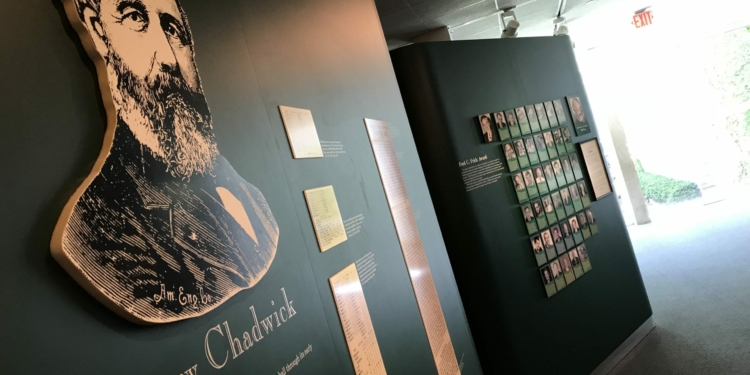 Baseball’s legacy runs through the Capital District more so than the annual parade of Hall of Famers who choose to fly into Albany International Airport before driving the 90 minutes to Cooperstown.

Long before slow-motion replays, Mickey Mantle’s tape-measure home runs and Babe Ruth’s “Called Shot,” baseball was a game played on vacant lots by everyday people throughout the country’s landscape. The game’s popularity inspired one writer to call it the National Pastime. Finding how it all started, however, was a grand debate that pitted two men with local ties, one of which a resident son-in-law of the Glenmont community.

The Capital District’s place in baseball history is often tethered to names in Troy, leaving other storylines behind as cursory tales to be forgotten by the masses. Little Leaguers once walked into Johnny Evers’ sporting goods store to pick out a mitt and ball, some of whom would not be aware of the Trojan’s own stake in the game’s history. Before the diminutive middle infielder took the field, the Collar City was home to a storied ballclub that shocked New York City fans who thought a bunch of “Haymakers” couldn’t play the game as well. That storyline takes fans back before the Civil War, and prior to that, few people had a clear answer as to who and where the game was invented.

At the turn of the last century, two men had the strongest voices that formed the debate as to how the game was invented. Albert Spalding, former player and sporting goods manufacturer, believed baseball was America’s game, it started in America and it was created by Americans. His opinion on the game’s origins were made public to refute a contrasting theory from sportswriter and baseball statistician, Henry Chadwick.

Chadwick created the basic statistics in which baseball players are measured. He conceived the batting average for hitters and the earned run average for pitchers. Whereas Spalding chose to envelop the game with the American flag, Chadwick stated the game evolved from “rounders”, an older game brought over from

England. Through the course of a commission organized to determine the birth of the game, Ballston Spa native Abner Doubleday and New York City native Alexander Cartwright emerged as possible inventors of the game.

Cartwright was a founding member of the New York Knickerbockers Base Ball Club in the 1840s. Like many young men, Cartwright would play “town ball,” a bat-and-ball game, in the streets of New York City after work. He is said to have documented the basic rules of the game as early as 1845. Prior to his involvement in baseball, Cartwright married Eliza Van Wie in 1842. Van Wie’s family name dates back before baseball, the United States and Albany itself. Eliza was a direct descendant of Hendrick Gerritse Van Wie, who was a Dutch Colonist in Fort Orange in 1664. He built a house on a plot of land along the Hudson River in 1679, known today as Van Wie Point.

Doubleday was part of a military family legacy. His father fought in the War of 1812. His grandfather fought in the American Revolution as a mounted messenger for George Washington. His great-grandfather was a Minuteman. Doubleday, himself, was a two-star general for the Union Army during the American Civil War. He was proven to be a competent leader in battle, both at Fort Sumter and Gettysburg. Outside his war accolades, Doubleday is credited with inventing the cable train famously used in San Francisco. But, prior to his death in 1893, no one could claim he ever boasted of playing baseball.

The Mills Commission, overseeing the research into baseball’s origins, reached out to anyone with information on the game. It was a form of crowd sourcing for information. The credibility of such information would later be investigated. Abner Graves, a Denver resident and Cooperstown native, wrote to the commission in 1905 to claim Doubleday invented the game as a schoolboy, and had organized a game in a cow pasture near the shores of Otsego Lake. In his letter, he recalled the year being “either 1839, 1840 or 1841.” The commission ruled in favor of Doubleday.

Today, baseball historians believe neither Doubleday nor Cartwright invented baseball. Most are inclined to believe the game evolved from town ball and rounders, much like what Chadwick originally claimed. Writer Peter Morris delved into the subject in his book “But Didn’t We Have Fun.” He notes of a similar game called “Wicket” played as early as 1830 in Bristol, Connecticut. Twenty years later, the game was mentioned in newspapers in Michigan.

Writer Stephen Hirsch noted that the earliest mention of baseball in the Capital District was the mention of an Albany club playing exhibitions on “the island opposite this city” in 1859. Bonacker’s Island, which was filled and is now a part of the city of Rensselear, would play host to many amateur and professional games. It is also the site of Major League Baseball’s first walk-off grand slam, a feat accomplished off the bat of Roger Connor, whose Troy team beat Worcester. Troy, whose home crowds were notoriously small, would sometimes play closer to Albany to draw larger attendance numbers.

Though Doubleday’s claim to baseball’s birthright was dubious — and not a battle of his own undertaking as he died several years beforehand — Cooperstown would become the home to the game’s National Museum and Hall of Fame. A baseball field would be constructed and named in his honor in 1939, the 100th anniversary of his supposed invention of the game.

Cartwright, however, would be the only one of the two who would be enshrined in the Hall of Fame. After baseball, he and his family chased gold out west in 1849. He settled in Hawaii, teaching the rules of baseball all along the way before he died in 1892. On his bronze plaque in Cooperstown reads,  Alexander Joy Cartwright Jr. ‘Father of Modern Day Base Ball.’”