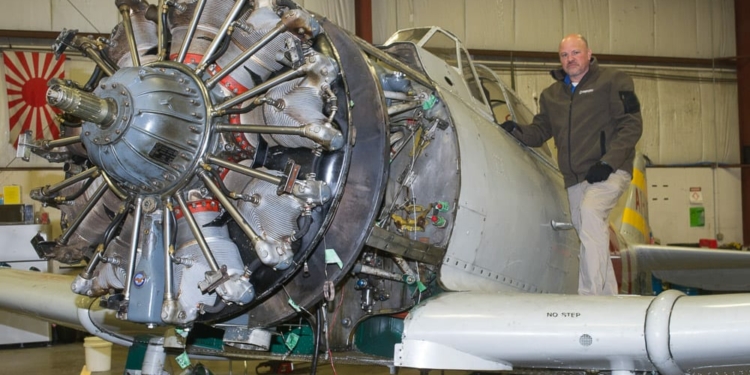 Integra Optics CEO David Prescott stands on the wing of a Japanese Zero replica in his hangar at the Albany International Airport.

COLONIE — While he was growing up in Minnesota, Integra Optics founder and CEO David Prescott watched the plane get shot down countless times in movies like “Tora! Tora! Tora!,” “Midway” and “Baa Baa Black Sheep.”

The 1952 Harvard Mk. IV, better known as TORA I, was built by the Canadian military and transformed into a replica of the Japanese Zero by 20th Century Fox. It was filmed for the big screen fighting American planes during WWII, and was more often than not on the losing end of those Hollywood battles. It is also, more specifically, a replica of a Japanese plane that flew in the second wave of attack on Pearl Harbor. More than 2,400 Americans died at the Hawaiian naval base on Dec. 7, 1941.

“As a kid, I grew up watching the Black Sheep Squadron and I watched this plane get shot down every week,” Prescott said of the late 1970s television series featuring a group of misfit fighter pilots under the command of Major Greg “Pappy” Boyington.

The meticulously kept plane was owned by Douglas Jackson, of Jackson and Associates, and for 22 years he flew it in airshows across the country. Jackson also encouraged people to get a close up look at plane to get a bit of its story, and by extension learn a little about our country’s entry into WWII — one of the most significant events in our history.

Prescott, a licensed pilot, a historic aviation enthusiast and U.S. Navy vet, now houses the plane at the Integra Optics hangar at Albany International Airport and plans to use it in much the same fashion as Jackson, who recently died of an aggressive form of cancer.

“I’ve always been into historic aviation and people reached out to me from the estate knowing that I would likely keep the plane going,” he said while sitting in an Integra Optical conference room next to the hangar and the company’s manufacturing plant. “My reasoning for keeping the plane going is it serves as an ability for us to reenact major battles and major events in American history. This aircraft is a replica of a plane used in the surprise attack of Pearl Harbor and that is a significant event we don’t want to forget.”

The plane is currently getting a new 600-horsepower Pratt & Whitney motor and should be airborne again by next spring. The motor will, of course, have a shiny 2018 penny wired it. It is more for tradition today, when information is readily available online, than the original purpose served decades ago of telling mechanics at remote airfields when the engine was installed.

But the plane is all about tradition. This summer it will be on the airshow circuit reenacting the storied dogfights between American and Japanese pilots that have captured imaginations for decades.

“To have Tora 101 in the air and available to the public is what Doug would have wanted,” said Sherry Henderson, Jackson’s widow. “Flying was his passion and his life, he would be so pleased and honored to have the Tora 101 legacy continued. My hope is that her story will be told for generations to come.”

When he owned the plane, Jackson corresponded with descendants of Japanese fighter pilots who flew the real Toras in WWII. He passed on that research to Prescott to help tell the story of the plane, and educate the next generation on the lessons of WWII.

While other pilots will fly the airshows, they won’t fly all of them. Prescott, will have some fun too.

“It’s a light, aerobatic plane and it’s fun to fly,” he said.

Asked how it compares to newer, sleeker models he said with a shrug: “An airplane is an airplane.”

But, the former Navy nuclear engineer last based at the Naval Nuclear Power Training Unit in Ballston Spa, said owning the plane is not all fun and games. It also serves significant practical and symbolic purposes.

“Integra Optics is a veteran owned company and a large percentage of our employees — up to 25 percent — are veterans and this plane is a tribute to all our veterans and the sacrifices they made to protect our country,” he said. “To me, it’s about history. It’s about keeping alive the history of our nation.”

When not flying in airshows, it will sometimes be on display at the Empire State Aerosciences Museum in Glenville so people can get a close up look at it and learn a bit about its history.

It fits in nicely there, Prescott said, and it’s by coincidence. The Japanese Zero this airplane is modeled after flew off the storied aircraft carrier Akagi to bomb Pearl Harbor. The museum has a 33-foot model of that ship on display, so with the plane there, visitors will see a plane with the same markings of the ship it flew off on the day we got pulled into WWII.

Basically, Integra Optics, a company Prescott founded in 2007, “helps network engineers, designers and managers around the world build out new fiber optic networks, extend the value of their existing networks and maintain uptime with the most reliable transceivers and fiber optic components available,” according to its website.

More basically, it provides the ability of fiber optic technology to bring usable data to televisions, phones and computers around the globe with reliable, fast hookups to the internet.

So, what does a high-tech company working with fiber optics have to do with old airplanes.

“Integra Optics is all about attention to detail, so our tie to aviation is a natural fit,” Prescott said. “We expect quality and reliability when we are flying, and it is the same our customers receive when they buy a product from us.”

Seuss’ big grouch pulls the audience in with unique charm

Spotlight on Finance: Your financial plan should be about you