What once was lost: Class ring returned to rightful owner 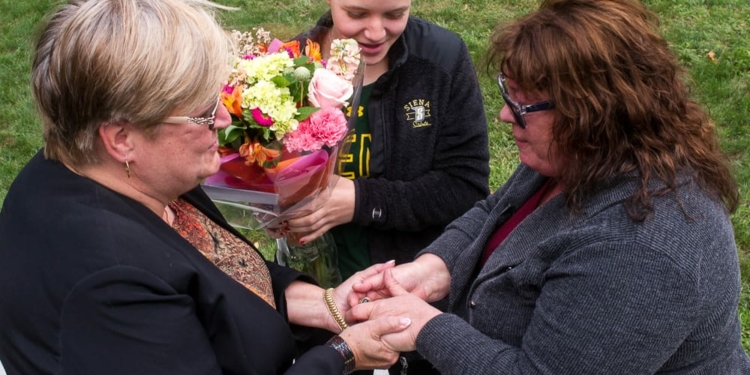 COLONIE — In May, Reeny Milton was getting ready to do some gardening at the Saratoga Spa State Park and saw something glistening in the dirt. Turns out, it was a Siena class ring from 1949 with the initials “JJF” engraved on the band.

Wanting to do the right thing, she told herself at that time had to find the rightful owner and maybe made a cursory effort at doing just that at the time by a quick internet search of Siena alumni.

But, as often happens, life got in the way, and she forgot about it until she came across it last week while going through some of her things in a little croc next to her bed.

So, having a bit of time to spare and knowing school had recently started back up, she made some phone calls to people at Siena and it didn’t take them long to figure out the ring’s rightful owner was James “Jim” Forth, since he was the only graduate from that year with those initials.

Coincidentally — or maybe not — about the time Milton was calling Siena, and just days before Siena was calling them about the ring, Forth’s wife had died at the age of 97.

“I think it was meant to be,” said Forth’s daughter, Cathy Forth, of the timing. “It was a reminder from him for us to stay together.”

As the story goes: “We had a meeting to do some weeding at Saratoga Spa State Park and I got there early and I was walking around, looking to where we can make it more presentable to the public and about three-feet off the path I saw a little gold, circle type thing. I said ‘that looks like a piece of jewelry,” said Milton, a master gardener who was volunteering her time at the park through a program sponsored by Cornell Cooperative Extension. “So I scooped it up, and went to my car and got out my glasses, of course, and read it was Siena Class of 1949 and it was this beautiful, well-worn old ring but on the inside the initials were as clear as day.”

James Forth, a WWII and Korean veteran, died in 2016 of pancreatic cancer at the age of 91. While Cathy Forth was going through his belongings, she came across the ring and knew to whom it should go — her daughter Veronica Forth who had a bond with her grandfather most people don’t think about until too late.

“My grandpa and I would get together a lot and we would have nightly conversations. We would call each other every night at 9 p.m. and he would tell me what he did that day. Unless it was Tuesday, because that was poker night and you didn’t mess with that,” said the now 17-year-old Rexford resident who is working with her Niskayuna High School guidance counselor to apply to her grandfather’s college.

The two would go to Siena basketball games together, attend church together and have lunch at Barnes and Noble. Before she was old enough to know there was a “Grandparents Day,” she made one up to honor her grandfather.

“I wanted to have his dog tags and his ring and when I was younger and when I asked if I could have them he said, ‘when I’m good and dead. A soldier never leaves his dog tags,’” she said. “I don’t think people appreciate their

grandparents. They are not going to be here forever.”

Her grandfather had what he called “farmer’s hands” and there was no way his ring would fit her petite finger so her mother had her put it on a chain. Evidently, the chain wasn’t strong enough. She isn’t clear on when she lost the ring, but she did attend a wedding at the park last year.

Her grandfather was married to his first wife Ursula, Cathy Forth’s mom, for some 50 years. He married his second wife Barbara, who lived two doors down from him in Niskayuna, at Siena in 2000. He was 76 and she was 79, and had been married for 52 years before tying the knot with James Forth.

Veronica and Cathy Forth came to the Siena campus on Friday, Sept. 21, to collect the ring and meet Milton for the first time. They brought flowers and a card as tokens of their appreciation.

While appreciative of the gifts, Milton said if the tables were turned she hopes someone would do the same for her.

“It’s about integrity and just doing the right thing,” she said.

EDITORIAL: A place in the neighborhood