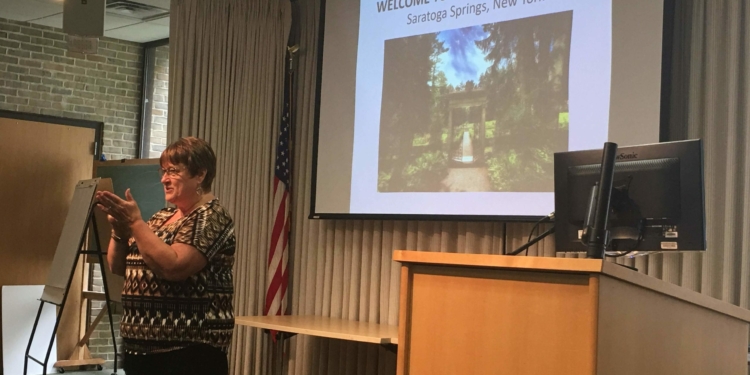 Presenter Lesley LeDuc, above, spoke about the gardens’ entrance gate, which bears the letters ST/KT. It stands for Spencer Trask and Katrina Trask, a prominent Saratoga couple in the late 19th and early 20th centuries, who owned the Yaddo estate at the time. Diego Cagara / Spotlight News

BETHLEHEM — Locals got to learn more about the Yaddo Gardens, an artist community up in Saratoga Springs, and its historical origins during the Friday, Sept. 14, installment of the Coffee and Conversation series at the Bethlehem Public Library.

Lesley LeDuc, a docent and a member of the Board of Directors at Yaddo, spoke about how it is a recognized place where artists, filmmakers, poets, musicians and writers can apply to stay for a period of time to escape their everyday surroundings and work on their crafts. Its renowned resident artist program is divided into five categories: Literature, Visual Art, Music Composition, Performance, and Film & Video. For more information, visit https://www.yaddo.org/apply/guidelines/.

This “artist colony” is located just off exit 14 on Interstate 87. While the area is accessible to the public, the property remains privately owned.

LeDuc introduced the prominent Trask family, the patriarch of whom was financier and philanthropist Spencer Trask (1844-1909) a graduate of Princeton University who founded his own law firm. He and his wife, Katrina (1853-1922) a fellow philanthropist and author, had several children, all of whom died prematurely.

Together, they bought this 400-acre estate back in 1881 and moved into the currently-standing house in 1893, after the original burned down in 1891. It became an artist colony around 1926, according to LeDuc.

“There’s 55 rooms in this 45,000-square foot estate, 20 bedrooms, 11 bathrooms and I think if I remember correctly, there’s 16 fireplaces,” LeDuc said, chuckling. “When we do public tours of the area, someone always asks me about the number of fireplaces.”

Tours of the Yaddo Gardens are offered every summer and fall. The estate, which serves as the site for “25 to 35 weddings every year,” according to LeDuc, is also notably populated with multicolored gardens, fountains, marble and a pergola.

In addition to presenting numerous historical photographs of the family, the estate and its gardens, LeDuc also displayed postcards that featured the estate in the early 20th century. She also shared about how the property’s overall aesthetic features, including its statues and fountains, began to  deteriorate over the years, particularly during the 1970s and 1980s, and how there has been an effort to restore them ever since.

“We clean the marble statues with toothbrushes once or sometimes twice every year,” she explained. “They’re all marble so they’re very porous and we have to be very careful.”

The pergola, the so-called dominant feature of the gardens, consists of 38 ionic columns and is about the length of a football field. It is a popular location for weddings at the estate.

The pergola also had to be restored as it was made out of terra cotta which deteriorates “from the inside out … and the columns were all taken down.” While some columns were still capable of being reused after restoration, others had to be replaced completely.

“We were all afraid of when the columns were taken down,” she said. “And the restoration cost almost $500,000. But eventually, they were all put up again and they just look like they came back, looking better than ever.”

An audience member later asked how the name “Yaddo” came about. LeDuc said that while there have been at least six untrue “fanciful” versions of where the name came originated from, it actually came from   Christina, the Trasks’ young daughter who once mispronounced the word “shadow.”

For more information about the estate, visit https://www.yaddo.org/.

Each week, the Coffee and Conversation series features a visiting speaker who comes to discuss either their professional or personal expertise about a work of art or a local landmark for about an hour. The series, co-sponsored by Bethlehem Senior Projects, Inc., takes place at the Bethlehem Public Library weekly on Friday afternoons beginning at 1 p.m.

The next Coffee and Conversations event will take place on Friday, Sept. 21. For more information about this week’s and other upcoming topics, visit http://www.bethlehempubliclibrary.org/programs/adult/coffee-and-conversation/.