by Jim Franco
in Business, Community, Culture, News, The Spot
0 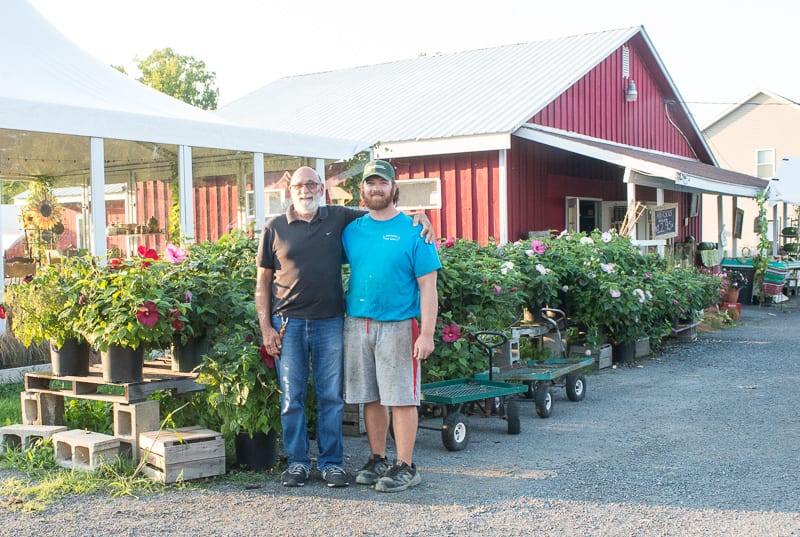 Today, there are 20 acres left of the original Lansing Farm located along Lisha Kill Road near the border with Niskayuna. It’s surrounded on three sides by single family homes and to the West by the Lisha Kill Nature Preserve.

The pressure to develop has been difficult to withstand, said Lansing while sitting outside his farm stand among freshly picked corn and melon and tomatoes and other vegetables and flowers.

“What I am trying to do is preserve the last of the Lansing Farm. After 228 years this is it,” he said. “I’m the eighth generation and I’d like to see the ninth take over, but at the same time, the building pressure in this town is becoming so atrocious. They will build anywhere any place they can. That’s my main goal right now. To preserve this as farm land and not see any more houses built. We have enough houses.”

To accomplish that, he is working with the Mohawk Hudson Land Conservancy to create a conservation easement — or a partnership with the landowner and other entities to ensure the land would be

forever farmland. Basically, the landowner, the Lansing family, would give up their right to sell the land to anyone who will use it for anything but farmland.

Lansing said, along with MHLC he is working American Farm Investors out of Boston to pay him the difference between the land’s worth as calculated as agriculture versus its worth if calculated by developable, with the latter being substantially higher.

Sounds nice on paper, but it is a double edges sword because the landowner gets substantially less money than an outright sale, and it is difficult to keep a family farm afloat in this day and age. Once the deal is done, though, there is no going back because the development rights are now in the hands of the land conservancy.

If, for example, the deal goes through, and an ancestor of his wants to sell the land they would have to sell it to another farmer and not a developer because those rights are in the hands of another entity.

“We really want to see some land protection in Colonie. It still has great places to work on and we are anxious to work on them,” said Mark King, the executive director of MHLC, adding the most well-known conservation easement he worked on is Indian Ladder Farms in Voorheesville. “We are really hopeful (about Lansing Farm) but these things are always challenging.”

A grant application from the state Department of Agriculture and Markets is due on Aug. 31.

“I think it is almost a done deal. I’m in the midst of buying out my siblings. I have seven brothers and sisters, ” Lansing said. “And my son, Patrick, expressed an interest in taking over the farm. He has a degree in biology, and spent three years in Boston and I never thought I would hear him say ‘I’ve had it with the outside world and I want to come home to the farm.’”

Patrick Lansing said he didn’t much like sitting behind a desk in an office day in and day out, preferring to work with his hands instead — and working for himself.

“When you sit behind a desk you feel like you are wasting away so I wanted to come back here. It keeps me active and it’s an enjoyable job. You control your own hours and there is nobody telling you what do to,” said Patrick Lansing. “And I wanted to continue the family legacy. We have been here a long time.”

It was 1788 and John V.A. Lansing was a 19-year-old living Waterford. He was working for the Van Rensselaer family as a surveyor and as a reward for a job well done the family gave him 500 acres of farmland and he bought 500 more.

The name grew, and by the first half of the 1800s there were 37 Lansing families living in the area. Together with other families, they helped build the Niskayuna Reformed Church, which still stands on Troy Schenectady Road.

“In 1850, at the age of 80, he told the Niskayuna Reformed Church congregation to go to hell because they wanted to assess him,” said Al Lansing of his great, great grandfather. “So the Lansings got together and built the Lisha Kill Reformed Church on Central Avenue.

“And the funny thing is, as the story goes, he left the other church because he didn’t want to get assessed but at the first service of the new church, John V.A. Lansing stood up, locked the doors and said nobody is leaving until this church is paid for. It got paid for.”

The Lansing Farm was close to going under 54 years ago when Al Lansing decided to at least give farming a try. And even then, it may not have happened if Neil Sheldon, who owned the Agway on Front Street in Schenectady, didn’t give him enough credit to buy fertilizer and other supplies, at least until the corn crop came in.

“When I started here there was nothing. My dad had had enough and I had zero to start,” he said. “It’s been a tough 50 years, sometimes, but we managed to get through it. No one who saw it in 1970 would

An old rusted out tractor that sits to the side of the farm stand is what he used to plow the fields back then, he said. And now there are tractors with cabs and hydraulics and they are getting ready to build yet another greenhouse.

Greenhouses are the way to go, he said, because they eliminate a farmer’s biggest variable — weather. He has both the kind you start seedlings in, and others that cover plants with roots in the soil.

He has added programs. A Community Supported Agriculture Program — which is similar to a co-op and where people pay a flat fee to get a certain amount of fruits and vegetables each week — is going strong and there is growing farm to table dinner hosted at the farm each Saturday night.

The family hosts pig roasts and open houses and at least once a year school children visit for a tour and a chance to pick fresh berries and vegetables. Al Lansing wanted to make the farm and/or farming part of a child’s formal education but so far has not had any luck getting the idea off the ground.

Even the popular farm stand had to get bigger and sell more stuff, like pies and donuts and homemade preserves, to accommodate the community’s needs and wants and to help keep the farm going.

“This country needs small farms to stick around,” Al Lansing said.  “We are in a good location, surrounded by a great community and we want to keep it that way.”

His wife Donna and his children Jessica, Albert Sabrina and Patrick all work the farm to one extent or another.

“It’s close to our hose and you can’t beat the fresh food,” said a customer, Ratna Randive. “You can’t find this in Hannaford. The kids just pick it up and eat it. The family knows what I want, and knows what I want to do with it and they help me.”

The family all has other interests and other jobs and Al Lansing took a few years off to study farming at Cobleskill but even then “grew crops to pay for the tuition.” He also took courses at Cornell University and Mississippi State and did research on different aspects of farming for Cornell Cooperative Extension when he did a six-year stint as chair of the organization’s vegetable program.

As Norman Rockwell as a small family farm may seem, it’s not easy to keep going and even harder to resist the near constant knock of developers that bang on the doors of old farming families with greater regularity.

“You start getting offered half million an acre you’d be a fool to say no,” he said. “Some of those guys were barely inching out a living. You can’t blame them.”

So, at 68, why not sell to the next homebuilder, collect a boat load of money and ride off to Florida to wear loud pants and play golf?

“Everywhere I look I see people who retire die,” he said. “This really isn’t work for me. It’s a place to go every day and see people and talk to people. I have it better than anyone.

“To really understand it you have to do it,” he said leaning forward with his elbows on his knees. “You take nothing in the spring of the year, nothing but barren ground. And you shape it and mold it and work the seeds and the plants and you produce a crop that feeds people. I create something that’s wholesome. Something that nourishes the body. Once you get hooked on farming, it more than a job, it’s a way of life.”