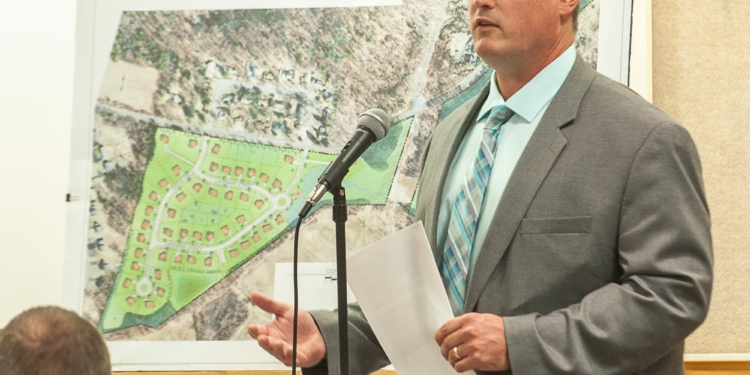 Jason Dell makes a presentation to the Planning Board. Jim Franco/Spotlight News

COLONIE — The Planning Board, by unanimous decision, approved, on Tuesday, Aug. 7, the construction of 46 homes in a newly created subdivision on Pollock Road.

Jason Dell, of Lansing Engineering, outlined the project that has been in the works for a number of months,  and presented an outline of the final project design to the board and the public on behalf of Barbera Homes and Development.

The 35 acres of land is within a conservation overlay district, which means the town requires 40 percent of the developable land remain greenspace and allows smaller lot sizes to accomplish that objective.

With a conventional subdivision, the developer could build 76 homes on plots 18,000 square feet, and even under a conservation subdivision, which allows for the smaller lots, 63 could be constructed, said Joe Grasso, the town’s designated engineer.

There will be cul-de-sacs at the southwest and northeast corners of the development.

Of the 35 acres, 4.1 are considered “constrained,” or undevelopable because of a wetland designation or too great of a slope. When combined with the 12.53 acres of developable land that will not be developed there is a total of 16.68 acres that will remain greenspace.

Other concessions the developer made, according to Dell, include one entrance into the development from Pollock Road, with the proposed second entrance now restricted to emergency vehicles only.

The developer will also construct a pocket park with playground equipment for pre-school and elementary school age children. The homeowners’ association will be responsible for the park’s upkeep.

One resident, Cynthia Ray, questioned the impact the development will have on traffic on Oxford Drive and other surrounding streets.

While the new development does not have a direct connection to Oxford Drive, it is a busy road with two other developments tying into it – Mountain View Terrace Apartments and Rose Garden Court Apartments.

The new project is expected to generate 35 new trips during the peak morning traffic hours and 46 during the afternoon.

Grasso said the new development, called Boght Meadows as it worked its way through the planning process, does include a “stub road” to tie into yet-to-be presented other developments on what is now empty farmland. If all goes as expected, traffic will funnel onto to Sparrowbush Road.

A final requirement the board imposed was for the builder to not construct more than three homes in a row that are exactly alike.

“This is a much better project than when we first saw it,” said Planning Board member Brian Austin before casting his vote in the affirmative. “I would like to commend you for the work you have done.

FOOD & DRINK: A new, and old, way to enjoy shrimp