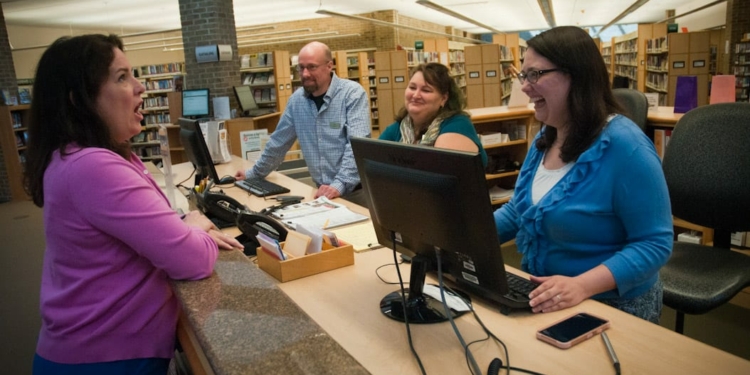 Local libraries know they have to adapt well into the digital age, which partially explains why many millennials continue to surprisingly come to their doors. Michael Hallisey / Spotlight News

When was the last time you used your public library?

That’s a question the Pew Research Center in Washington, D.C. asked in a 2016 study focused on overall use of public libraries.

With the consumer landscape so vastly changed in the 20 years since the emergence of the Internet Age, many public libraries have been able to keep in step with public needs where other industries have failed. Sears and Toys R Us — for years viewed as giants among retail stores — just recently faltered, falling victim to the proclivity of their customers to shop elsewhere online.

Perhaps most surprising about the data is when the study is broken down by how each generation answers this opening question. When the center recently repackaged the data to focus by generational use, the figures point to a newer wave of patrons.

Generation X, defined as falling between the ages of 36 and 51, was next in line at 45 percent, followed by baby boomers at 43 percent.

The Silent Generation, ages between 71 and 88, was least likely to have visited the library, at 36 percent.

Public perception could lead to assumption that millennials, who range from recent high school graduates to those who left high school in 2000, are likely to visit a library for class assignments. The study specifically focused on public libraries, not those in high school or on a university campus.

College graduates are frequent visitors to their respective public library. In the past year 59 percent have done so, followed by women (57 percent), parents (55 percent), and 16- to 29-year-olds (55 percent) as the largest social

demographics. Additionally, 50 percent of Americans living in households with annual incomes of $30,000 or less have visited the library in the past year.

The frequency in which people use libraries has not changed since 2013. Among those who have visited a library, 30 percent visit several times a month — similar to figures collected in 2013 and 2015, with 31 and 28 percent, respectively.

“So it’s not that millennials don’t use the library — but their patterns are a bit different,” said Rebekah Jarvis-Girtler, a librarian in charge of outreach and digital services at the William K. Sanford Town Library in Colonie, herself a millennial.

She said they may just run in, grab a book and run out rather than using reference services or workspace. Also, millennials are perhaps the first generation to have effectively and efficiently use smartphones and other electronic devices as an integral part of how they communicate, organize their schedules, get information and be entertained.

Technology has indeed disrupted our service model, but despite popular narratives to the contrary, libraries have been exceptionally adaptable in the face of that.

The library has a Libby app to check out books and a Flipster app to checkout magazines and together they account for tens of thousands of checkouts each years.

The digital age, in a reverse-psychology kind of way, does benefit libraries too as people try to escape the endless stream of digital information.

“Folks my age are totally overwhelmed by an avalanche of data streams and content,” she said. “So, under this mountain of stress, it’s the path of least resistance in a very resistant world to just go home and fire up Netflix, than it is to invest in social interactions and being physically present somewhere.”

“The interesting question will be, will this generational trend continue as they [grow older]?” asked Geoffrey Kirkpatrick, director at Bethlehem Public Library. “They are starting to have children. That’s what drives them back, if they’ve left. Maybe. Some of that statistic may just be representative of the fact millenials are changing their life phase.”

Christine McGinty, Bethlehem’s head of circulation and technical services, also attributes the engagement effort that started 15 years ago to bring school-aged children into the library.

“These are now the results of the work of trying to engage with them more,” she said. “There’s more trust in the library, because we were working with them at a young age.”

For larger communities, libraries ceased being a one-room building from which the public could borrow books. They are centers of the community. It’s home to several different services and provides additional opportunities to learn about the world outside of books.

The physical structure of Bethlehem’s library has changed little in the nearly fifty years since it was erected. But, its logistical layout within has adapted with the changing times. Whereas twenty years ago, a room with a single computer once stood in the back, there are now more than a dozen PCs dedicated to internet access.

“We are in an age where there’s a real question about the authenticity of what you’re finding online,” said Catherine Stollar Peter, head of circulation and technical services. “Libraries have always been a source of authoritative information. Not the library, itself, is giving you the answers. But that it’s providing you the information literacy and critical thinking skills to make decisions about what you’re experiencing in the world.”

Like many of the libraries across the nation, Bethlehem offers a technological “petting zoo,” where its patrons have access to GoPro cameras, various types of reading tablets, a 3-D printer, and more. The purchase of some of the items are covered partially by the library’s budget. A lot of it, however, is supported by its Friends of the Library community group.

“It’s this relationship that has developed over time [with] a community, that wants a library that is good — or great,” said Kirkpatrick, who gives credit back to patrons for providing support and feedback. “It’s very cyclical and symbiotic thing between the community and the library.”

Beyond the pronoun game: Tang Museum exhibition a safe space for queer culture