Sheriff’s department preparing for ‘Back to School’

by Michael Hallisey
in News, Schools
0 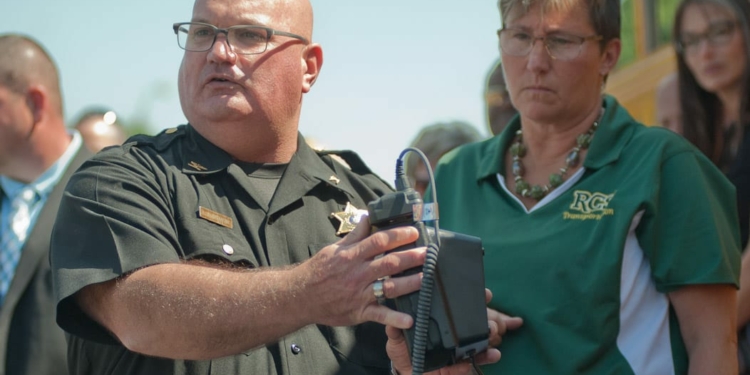 The Police And Pupils Enforcing Safety program is to provide communication equipment that will directly connect RCS, Berne-Knox-Westerlo and Voorheesville district staff with Albany County dispatchers.

In light of the tragic events of Parkland, Fla. and with the 2018-19 school year quickly approaching, Apple wants “children to feel safe and secure” and wants the sheriff’s office to “do better than we have been doing.” Already, a School Resource Officer has been placed in almost every school in the area. However, “schools need more than an SRO to keep kids safe… officers cannot be everywhere if something happens,” he said.

The plan is to equip each district with an emergency communication system that includes 19 “Panic Button Control Stations,” 20 portable, two-way radios and mobile radios on 114 school buses. With a push of a button, these devices open a direct line of communication between the school and Albany County’s 911 dispatcher.

Partnering with Motorola Solutions, Albany County is the first in New York state to install a communication system of this nature. In total, the system costs $330,000, but it is a one-time cost with no effect on taxpayers. It will be paid for by the sheriff’s office with gambling and drug asset money seized from criminals. “It is hard to put a value on protecting our kids,” said Apple.

In the event the system is used, not only will 911 will be contacted immediately, but the dispatcher will also be able to hear and monitor what is going on in the background, ultimately sharing that information with first responders.

Other features of the initiative include a redesigned Albany County Sheriff’s Mobile Phone App. The app integrates “See Something, Say Something” and “See Something, Text Something” features, to allow students and teachers the ability to call, send pictures and videos, or text the Sheriff’s office in the event of a potential or actual emergency.

Francis Reilly, the assistant superintendent for finance & operations of the Voorheesville School District, said that in society today, “time is always of the essence… the fact that one can hit a button and immediately call 911… it’s refreshing.”

Reilly touched on the system providing “another layer of security for the whole community.” With two-way radios in district school buses, bus drivers can communicate with each other, with the schools and with the police. RCS, BKW and Voorheesville school districts are in rural areas where there is a risk of wild animals, accidents and more, he said. The instant communication through radios is meant to allow the community to be safer, as well as the students.

Along with the two-way bus radios, the “panic buttons” will be placed strategically around the districts. There will be three to four systems in each of the buildings and they will be placed in areas with high student access, such as cafeterias, libraries and gymnasiums. The 20 two-way handheld radios will also distributed and given to teachers and administrators for use both inside and outside during the school day.

At the conference, a live action test was revealed how a county dispatcher was in touch in less than five seconds.

Engineered specifically for Albany County, there are high expectations for the success of this initiative. Eventually, there may be a spread of the use of the system to other districts and areas.

“We are here to help, mentor and guide the kids,” said Apple. Come September, the goal is that “kids can return here and feel safe coming to school.”

Wolf’s is more than a sports bar