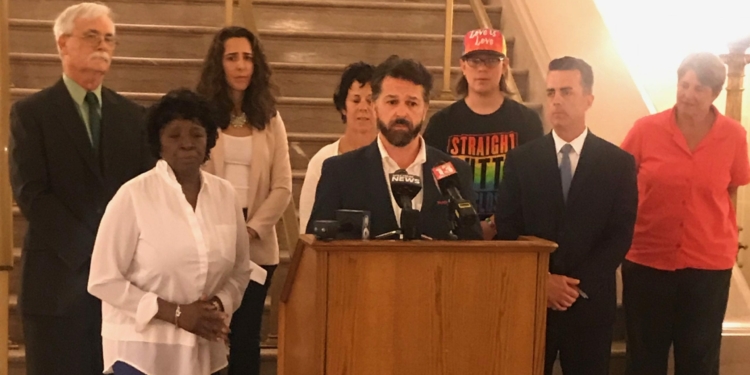 Backed by advocates and fellow legislators, Albany County Legislator Bryan Clenahan speaks at a press conference in advance of the legislative meeting at which Local Law E for 2018 was overwhlemingly passed // Photos provided

ALBANY COUNTY—The Albany County Legislature voted on Monday, July 9, to prohibit the use of “conversion therapy,” the practice of using modification therapy to attempt to influence an individual’s sexual orientation, on minors.

The legislation, Local Law E for 2018, prohibits anyone from offering or providing “conversion therapy” services—regardless of whether they are spiritual or psychological—to anyone under the age of 18 in Albany County.

“Passing this Local Law sends an important message to LGBTQ youth in Albany County,” said Bryan Clenahan, the Guilderland Democrat who introduced the legislation. “You are valued for who you are, no matter how you identify or who you choose to love, and so-called therapies that teach otherwise are abusive and have no place here.”

According to the American Academy of Child and Adolescent Psychiatry, there is “no evidence to support the application of any ‘therapeutic intervention’ operating under the premise that a specific sexual orientation, gender identity, and/or gender expression is pathological. Furthermore, based on the scientific evidence, the AACAP asserts that such ‘conversion therapies’ (or other interventions imposed with the intent of promoting a particular sexual orientation and/or gender as a preferred outcome) lack scientific credibility and clinical utility. Additionally, there is evidence that such interventions are harmful.”

All but two legislators voted in favor of the law. Brian Hogan (R-Latham) was absent and Ralph Signoracci (D-Cohoes) voted against it.

“I applaud the sponsor and all those who voted for it,” said Signoracci. “And I’m certainly not in favor of those kinds of practices. But it’s something I think should be done on a state level.” He said that one could simply cross the county line, adding that he also feels that issues such as paid sick leave should be done statewide and do not fall under the county’s purview.

In 2016, New York state banned insurers from covering the practice and prohibited mental health facilities from subjecting minors to it. In a statement, Gov. Andrew Cuomo called “conversion therapy,” “a hateful and fundamentally flawed practice that is counter to everything this state stands for. . . We will not allow the misguided and the intolerant to punish LGBT young people for simply being who they are.”

Correction: An earlier version of this story incorrectly identified Dan Hogan as the absent member. It was, in fact, Brian Hogan who was absent for the vote. Dan Hogan is a staff member and does not vote on legislation.