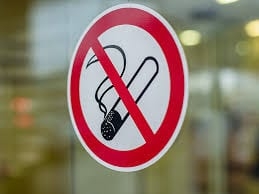 ALBANY COUNTY—Albany County Executive Dan McCoy signed a law on Friday, June 15, banning the sale of tobacco and other nicotine products in pharmacies and stores containing pharmacies in Albany County.

McCoy held a public hearing on Local Law A after the bill was adopted by the Albany County Legislature in May, where advocates and community members from around the county spoke in favor of the ban, citing health benefits the measure would have on residents.

“This is an important piece of legislation that will improve the health and the lives of Albany County residents,” said McCoy.

He noted that this measure improves upon a previous version of the bill, which he vetoed in 2014 because it lacked any enforcement mechanisms for the ban, by empowering the health commissioner to impose a civil penalty of $500 per day fine for any establishment in violation of the law.

“Removing tobacco products from locations where patients are going for their healthcare makes sense and is a public health victory,” said Michael Seilback, National Assistant Vice President of State Public Policy for the American Lung Association.

“Tobacco and pharmacies simply don’t mix. Albany County residents visit pharmacies for medications and advice that will improve their health, including quitting smoking. It makes it more difficult for a smoker to quit, when he or she is at a pharmacy to get a prescription and they see tobacco being sold,” said Julie Hart, American Cancer Society Cancer Action Network New York government relations director.  “We would like to thank Albany County Executive McCoy for standing up to big tobacco and putting the health of residents first.”

“In signing this bill, I am urging the Legislature to immediately amend defects in the legislation which also prohibit the sale of smoking cessation devices and implements of igniting tobacco products, namely lighters and matches,” said McCoy. “It appears these prohibitions were done in error through the use of certain definitions of Tobacco Products, and Tobacco Components or Accessories. It is hard to imagine that the Legislature intended to prohibit the sale of things like nicotine patches at the exact stores where one would expect to find such devices. Similarly, as written, the law prohibits the sale of matches at the same stores that sell birthday candles.”

“It was never our intention to ban the sale of matches and regular lighters,” Legislator Paul Miller, who introduced the legislation, told Spotlight in an email. “The bill states  under the definition of ACCESSORY that ‘solely provides an external heat source to initiate but not maintain combustion of a tobacco product’; matches and normal lighters are used for other purposes, such as lighting birthday candles.”

Miller also said the law does not prohibit the sale of smoking cessation devices. “The definitions for both ‘Tobacco Product and “Electronic Aerosol Delivery System’ exempt ‘FDA approved drugs, devices, or combination products as defined by the federal Food, Drug and Cosmetic Act.’  FDA-approved tobacco cessation products fall into this category of exempt products, meaning Local Law A does not prohibit their sale.”

If the Legislature chooses to amend any part of the law, it would have to go through essentially the same process as adopting a new one. The changes would be introduced, sent to committee, require a public hearing and eventually come back before the full body for a vote.

According to McCoy’s office, Albany County has the highest percentage of pharmacies selling tobacco products of any county throughout the state, despite CVS already banning their sale and no independent pharmacies in Albany County currently selling them.

A study conducted by the CVS Health Research Institute showed a reduction in cigarette sales in the eight months following the company’s 2014 removal of tobacco products from all stores nationwide.

The approval of this legislation comes as other localities from across the state and country have implemented similar measures, including New York City and Rockland County.

PICK of the WEEK: Rechorduroys drop album on Friday