Planning Board and fire district disagree on sidewalk, color of proposed south station 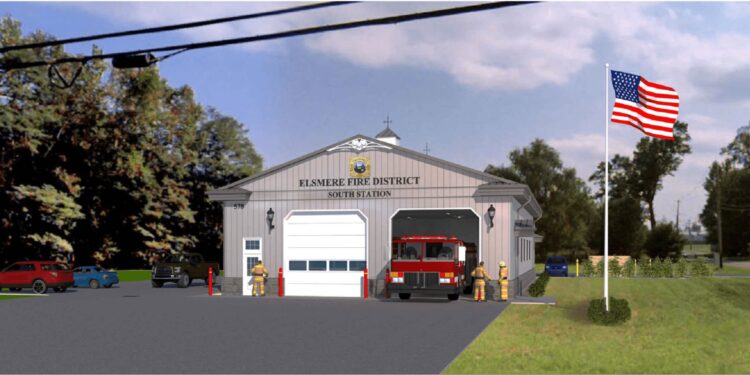 A rendering shows what the proposed substation would look like, in colors initially approved by a neighbor who subsequently told the Town Planning Board she would prefer to see it painted white. Courtesy of CT Males Architects

GLENMONT — A proposed Elsmere Fire Department South station at the corner of Feura Bush and Wemple roads would not be manned, nor would it be used as a community space, according to project representatives who spoke with the Town Planning Board on Tuesday, June 5.

When the project was initially proposed in February, town planning staff requested that a sidewalk be included in the plan to build a 4,608 square-foot firehouse “sub-station” on the 1.4-acre property. Noting that the fire district cited current and future development growth as a reason for needing the new station, town planners suggested that a sidewalk would benefit the growing community, as well as anyone visiting the station for community events.

Senior Planner Leslie Lombardo pointed out that fire stations generally serve as public meeting places and seemed unconvinced that it would never be used for that purpose.

“Even though the fire district has indicated that they will not hold community events at the site, staff thinks that maybe in the future it could be a possibility” she said, “since they have talked about wanting to recruit volunteers from this area of town.” She said building a connecting sidewalk would be good planning practice.

During the Planning Board’s June 5 meeting, Tim Hannigan, the attorney representing the Elsmere Fire District, argued that existing sidewalks on the opposite side of Wemple and Feura Bush roads should be adequate for the neighborhood. He added that it could be dangerous to encourage pedestrians to walk on Feura Bush Road directly in front of the station, as that’s where firetrucks would deploy from when answering calls.

Hannigan, a volunteer firefighter with the district himself, repeatedly stated that the fire district has no intentions of utilizing the station as a community space.

“This is not a community building in the traditional sense that our firehouse at 15 West Poplar is,” he said. “Another important note is that it is an unmanned firehouse. So, even if someone did come to the front of the apron, where we don’t want people to be, there would be no one there to answer the door.

“This is, for all intents and purposes, a garage to better position apparatus so that our members who live on that side of the bypass can get there faster and respond to calls faster on that side,” he said, explaining that the current station at 15 West Poplar is better equipped to host any potential community events than the new station will be.

Hannigan also added that additional construction costs would be prohibitive, citing the recent Trump-imposed tariffs on imported metals that he claimed have already added 25 percent to the cost of the project.

Town Planning Director Rob Leslie agreed that a sidewalk would be unwarranted if there were to be no community events at the new station, but said if that were not the case, he would prefer to see a sidewalk.

While Michael Moore, counsel to the planning board, suggested looking at possible language to effectively bind the district against using the station for such purposes, Hannigan balked at the idea of being barred “in perpetuity” from any course of action. He did say, however, the district might be open to the idea of providing additional safety measures in the case of any public events, an idea that Chairman John Smolinsky said seemed to address all concerns and was worth looking into.

Hannigan also answered questions about the color of the proposed building, which the Elsmere Board of Fire Commissioners changed at the behest of the only resident who raised concerns. Board members seemed critical of the building’s appearance and how well it would fit in to the surrounding neighborhood, However, Elsmere Fire Chairman John Brennan informed the Planning Board in a memo that the design represented hours of work to select an affordable and functional design. “Therefore,” he wrote, “the design presented is the final design.”

“Does this board intend to pick the color of the firehouse,” asked Hannigan, when he was told that he should have provided color options. He noted that the fire district is a municipality and suggested that the role of the Planning Board is different when involving other municipalities than when dealing with privately owned businesses.

“The ultimate authority will rest with the Board of Fire Commissioners,” he said.

In his memo, Brennan also explained that project cost limits meant that the station will not be a brick and mortar building. While the concerned neighbor might prefer those materials, if constructed, the proposed structure will be built using metal.

“The Board carefully considered its fiduciary responsibilities to the taxpayers of the Fire District when developing plans for the fire station and determined that a metal building was the type of building best suited to meet Elsmere Fire District’s needs for a host of reasons.”

Hannigan expressed concern that cosmetic concerns were holding up the process and would end up costing taxpayers more money. “Every time we print up a new set of plans, or even change them electronically, it’s costing money,” he said. “We’re talking about a public safety building,” he said. “And the hold-up is the color.”

The town is still waiting to hear back from the state Department of Transportation regarding its approval to add a new curb cut to Feura Bush Road, which is owned by the state. Additionally, the applicant still needs to respond to comments made by town engineering staff, regarding things like stormwater management.

According to Lombardo, once those comments have been addressed by the Elsmere Fire District, its representatives will go back before the Planning Board to secure approval.

“In the meantime,” said Smolinksy, “we’ll work on the color issue and, hopefully, when this is ready to come back, we’ll have some resolution.”

Mountain Jam is this week, and three of our own musical talents will be there