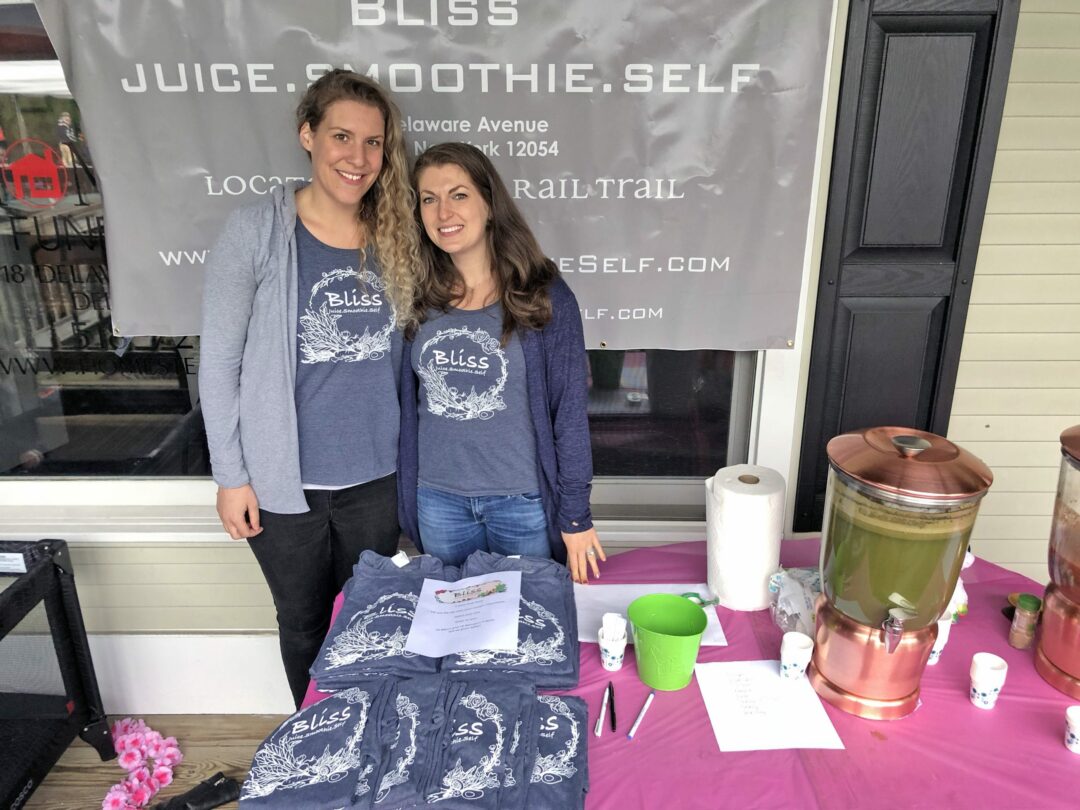 Bliss Juice Bar partners Jackie Slattery, left, and Katie Dievendorf are expected to open the refreshing, new business next to the rail trail at 278 Delaware Ave. sometime this summer.Submitted photo

ELSMERE — The Bethlehem Planning Board has approved the application for a new juice bar and fitness center next to the Albany County Helderberg Hudson Rail Trail on Delaware Avenue.

Partners Jackie Slattery and Katie Dievendorf became friends when Slattery and her husband, Liam, opened O’Slattery’s at 318 Delaware Ave. Dievendorf’s husband, Jeremy, has worked as their accountant and Katie, a lawyer, helped them get their liquor license.

When Slattery learned that the Delmar Health Hut at 278 Delaware Ave. was closing almost a year ago, she said she mentioned the idea of opening a juice bar in the location to the couple and found that they had already discussed the same idea.

“It was just too funny that we all had the same idea,” she said. “I thought about it all night and I texted Jeremy a few days later.”

The first step was to secure funding, explained Slattery and Dievendorf, and so they went to the town and were awarded a microenterprise grant in September for $25,000 to purchase machinery and equipment.

“When you apply for that, you have to have a business plan in place,” said Slattery. “So that kind of gave us an idea of what we all wanted. We had a lot of the same ideas and were really on the same page about a lot of things, which was really inspiring.” She said the support they received from town officials was also encouraging.

Bliss Juice Bar and Fitness will provide a respite for those traveling along the rail trail, as well as a haven for anyone who wants a healthy treat, to do some guided meditation or to simply sit outside on a nice day. It will offer healthy juices and smoothies, as well as salads and simple grab-and-go sandwiches and wraps. There will also be yoga classes, meditation sessions throughout the day and a kiddie corner for children.

“Katie and I are both entrepreneurs and health enthusiasts,” said Slattery, “but, most importantly, we’re first and foremost mothers and we know the importance of a good potty break.”

There will be a walk-up window and picnic tables, as well as an exterior entrance directly to the restroom, for those who prefer to remain outdoors. There will be a bike rack for cyclists.

“There are really no other places to stop [along the rail trail],” said Dievendorf. “There’s Stewart’s. That’s the only bathroom and place to get something that’s right on the rail trail. You can stop and get off and head to Delaware Plaza, but you have to go through the woods, it’s not really stroller friendly or handicap-accessible at all, so this would provide a place.”

“So this is setting precedent,” said Dievendorf, explaining that Bliss Juice Bar and Fitness is the first business to go through the proper channels to build a connection to the county-owned trail. “We’re the first to, literally, pave the way for this.” She said that connection will be “phase two” of the project, as they don’t know when that approval will be forthcoming.

“We get to move ahead with the rest of it, though,” she said.

While she hoped to open “last week,” realistically, Slattery said the goal is to be open sometime in July.

After Slattery and Dievendorf received the approval to move forward during the Planning Board’s meeting on Tuesday, May 15, board member Scott Lewendon praised the project, saying, “I think it’s a great project and I thank you for all your consideration of making that connection to the rail trail and I wish you a lot of success.”

“We want people to feel better when they leave than when they came in,” said Dievendorf. “Whatever that means for them. If it’s the meditation, if they need a break from their busy day or need to get some movement into their day or something healthy that they don’t have to stress about. They can grab and then go back to what they were doing, whether they were on the trail or at work. We want to be a friendly place for them.”

PICK OF THE WEEK: Def Leppard, Journey to take over TU Center

SPOTTED: Raiderfest and the STEAM Expo at Colonie High