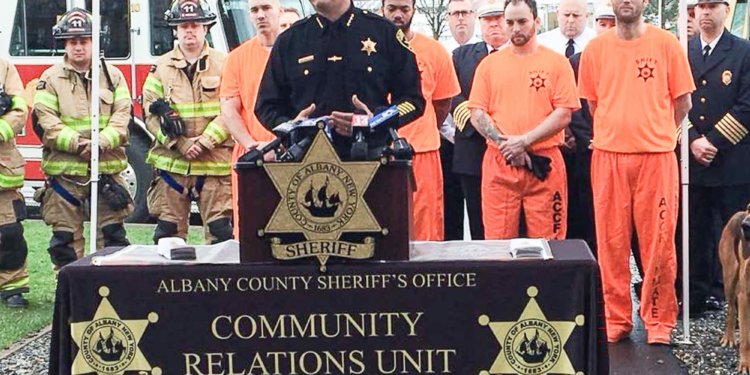 “We are giving them an opportunity to give back to the community they have been polluting,” Apple said of SHIFT – the Sheriff’s Inmate Fire Training Program.

Certified trainers will teach the low level offenders basic fire fighting skills, basic first aid and how to administer CPR and Automated External Defibrillator. Even if they don’t sign up at their local Fire Department to volunteer when they get out of jail, they still walk away with skills that can help the community, said Albany County Fire Coordinator Gerald Paris, who is a state and federal certified firefighter instructor.

“They have nothing else to do, why not give them an opportunity to give back to society, give back to their community. Maybe they never had that opportunity,” Paris said. “Before we go passing judgement on these people, who are low level offenders, maybe we should give them a second chance.”

There are five inmates in the freshman class and they are currently incarcerated for unlicensed operation of a vehicle, a family court violation, contempt of court, violation of probation and DWI, Apple said.

“Everything is aimed at lowering recidivism and keeping them busy as hell while they are in here,” Apple said. “What benefit does the public get if they sit in a six by nine cell for months at a time? I will tell you what the benefit is: nothing. The taxpayers will just keep paying over and over again to keep them here.

“And, they are doing this voluntarily so they want a chance to give back to society. To be productive, contributing members. Everybody wins.”

The initiative comes during the Firefighters Association of New York’s annual membership drive and at a time when volunteer departments across the state are scrambling for members. In the mid 1990s, there were some 120,000 volunteers statewide. Not even a decade later, as state requirements became tougher, it

About 70 percent of all departments in the state are staffed with volunteers, and if municipalities had to pay the salaries and benefits of those volunteers it would cost a collective $3.2 billion. That represents, on average, a 26 percent tax hike.

The program the sheriff is proposing will not cost taxpayers anything except possibly a staffers time. Asset forfeiture funds – money confiscated from criminals – will pay for the actual training and the sheriff used the same pot of money to purchase a pumper truck from the Village of Colonie so the inmates will have a truck to use for training.

Ultimately, he said, he would like to see the inmates staff volunteer departments similar to a work furlough program. They could help maintain the department and equipment and be ready onsite should a call come in.

“Manpower is an issue at all volunteer fire departments so wouldn’t it be nice to see a work release van show up and drop off two fully trained firefighters so the companies can have say five people rolling out the door instead of two,” Paris said. “If your child was trapped on the second floor of a burning building, are you going to care if one or two of the firefighters willing and able to save him is an inmate at the Albany County Correctional Facility?”

David Leonardo, the first assistant chief at Verdoy Fire Department in Colonie, said he can see a number of departments in Albany County benefiting from the program, including his. Membership is cyclical, he said, and right now there are less than 50 members at Verdoy, down from a high of 63 two decades ago.

“I would like to see how it all works out but I have to applaud the sheriff for moving forward with a plan like this,” said Leonardo, who has 35 years in fire protection. “I would have to say they will probably be in it to better themselves and I would absolutely not have a problem taking them on in my department.”

Right now, when a person volunteers for a local fire department, the state mandated background check includes only a search of arson and sex related crimes. Paris said should an inmate follow through and volunteer, the local fire departments will know more about them than those who walk in off the street.

And, he added, the membership will still have the ultimate say on who is allowed to volunteer. If they don’t want to sign up, they still have a valuable skill set.

“Are you going to care who administers CPR to you if you happen to collapse in a supermarket,” he asked. “This is all about saving lives and volunteerism. Something is better than nothing and right now we have nothing. It is easier to do nothing than something and these people stepped to the plate and volunteered.”

California trains inmates — and pays them $1 a day — to help fight the frequent and devastating wild fires that state experiences every year, but the training proposed by Apple is unique in that it will train the inmates to fight interior structural fires. Anyone looking to become a volunteer firefighter in this state requires 120 hours of training for the basic Firefighter I class.

Other programs he initiated at the jail include having inmates growing vegetables, a heroin addiction recovery program — called the SHARP, or the Sheriff’s Heroin Addiction Recovery Program — and a program to help incarcerated veterans find work.