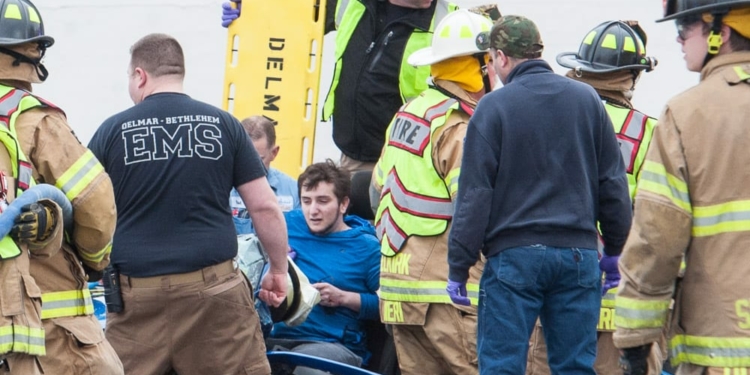 DELMAR – About 40 minutes after a man caused a serious accident at the intersection of Glenmont and River roads on Tuesday, April 17, while allegedly DWAI by drugs, he was due in court to answer a DWAI by drugs charge stemming from a March arrest.

According to the State Police, Russell Schwimmer, of Glenmont, was arrested on March 16 after troopers responded to a report of a suspicious person in Bethlehem.

Troopers allegedly found Schwimmer in possession of amphetamine and dextroamphetamine pills and determined he was driving after taking the stimulants.

Standardized field sobriety tests were conducted, indicated he was driving while impaired and he was arrested.

He was set to answer those charges in Bethlehem Town Court at 4 p.m. on April 17, said Bethlehem Cmdr. Adam Hornick.

To view a story on Schwimmer’s latest arrest click here.

At about 3:18 p.m. on that same day he allegedly blew threw a stop sign while driving on Glenmont Road and crashed into a Volkswagen driven by Sarah Dujack, a 27-year-old from Selkirk who was travelling south on River Road.

Dujack and her two passengers, a 4-year-old and a 5-month-old, were taken to Albany Medical Center Hospital for minor injuries.

Schwimmer was extricated from his blue Ford Focus by Selkirk firefighters and transported to Albany Med with serious injuries.

Based on the investigation, according to Hornick, Schwimmer was charged with DWAI by drugs, failure to yield the right of way at an intersection and unlawful possession of marijuana.

He is due back in Bethlehem Town Court on May 1 at 5:30 p.m. He was represented by attorney Derek Hogan on the State Police arrest, but it is unclear who he has as an attorney for the latest charge, if anyone.

Bethlehem Police were assisted at the Glenmont Road scene by the Selkirk Fire Department, Delmar-Bethlehem EMS and Albany County Paramedics. The crash remains under investigation and police are requesting anyone who witnessed the crash contact them at 518-439-9973.